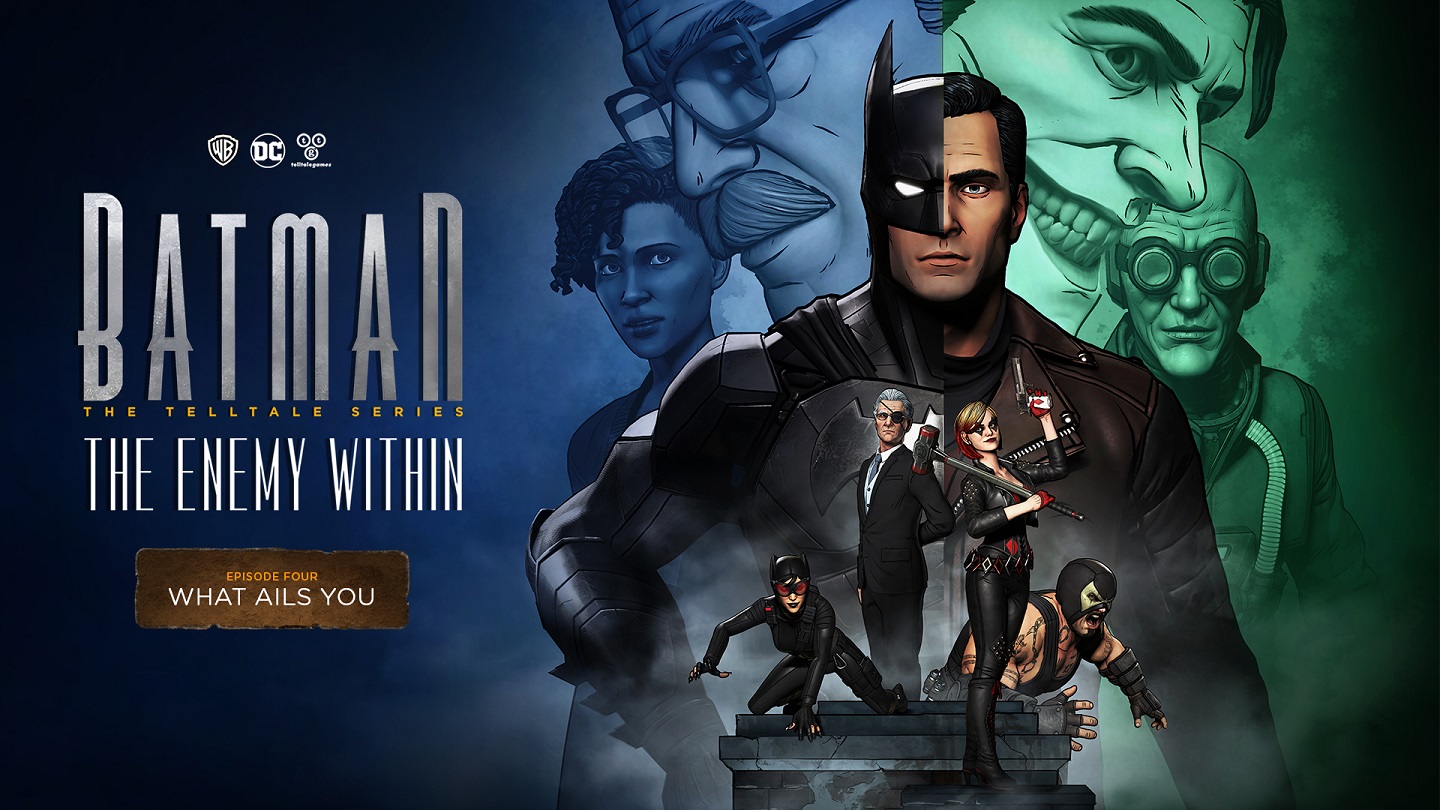 Overview: Batman – The Enemy Within’s fourth episode grabs hold and doesn’t let up for its entire run time. Motives are revealed; new alliances are formed while others are destroyed; and the origin of Batman’s greatest villain takes one giant leap forward. Full spoilers ahead.

Analysis: How much about who we are is defined by what happens to us? How much control to we have over the events in our lives, or is our control is how we react to these events? These are the questions at the heart of “What Ails You,” the penultimate episode of Telltale Games’ Batman – The Enemy Within. We’ve spent the past few episodes watching Bruce Wayne attempt navigate the criminal underworld while keeping hold of his own sense of identity. And where Batman is the creation of a series of events that happened to a young Bruce Wayne, events he had no control over, we see the Dark Knight knowingly and unknowingly responsible for the events that are creating his greatest foe, the Joker.

There has been a long simmering paranoia at play during this season in regards to John Doe, who we all know will one day become the Joker. Where Telltale flips the script is by having Doe’s journey informed by his relationship with Bruce Wayne, and, by extension, the player. Every choice we make in regards to John Doe, whether we act as a friend and confidant, or underhanded manipulative jerk, ushers the green-haired criminal forward. We know the endgame is the Joker, but this season has become about the “how” and “why” John Doe becomes the Joker, and how much of this blame can be placed on Bruce Wayne. “What Ails You” is where all these choices start to coalesce as Harley Quinn and her Pact are removed from the board, leaving Batman versus John Doe with the shadow of Amanda Waller, who seems to have lost the strings she was using to control the puppets of her covert agency. It makes the wait for the season finale almost unbearable, because when it comes to Telltale, we can take nothing for granted.

Let’s take a step back to the start of the episode. When we left Bruce Wayne, he was trapped in a cooler with the temperature rapidly dropping. In what can only be described as a page from the 1960’s television series, Bruce is able to escape thanks to his cellphone’s ability to remotely hack any device, including an EMP. He really is prepared for anything. After that bit of corny deus ex machina, the episode really kicks off as Batman hunts down the members of the Pact as they attempt to steal a deadly virus. What ensues is an action-packed series of quick-timed events that has Batman and Catwoman take down the villains while also seemingly thwarting Harley’s plans. Unfortunately she escapes with a vial of the virus and Batman is left to pick up the pieces.

Here’s where we learn what Harley hopes to do with the virus, and it’s not the standard “hold the city ransom” plot. No, instead we learn that every member of the Pact wanted the virus because, when mixed with Riddler’s virus-resistant blood, the virus would essentially become a cure-all for all disease. Mr. Freeze would be able to cure his wife, Bane would be able to ditch his addiction to Venom, and Harley herself would prevent herself from succumbing to a genetic degenerative disease. One small issue, the cure-all may fix your body, but it destroys your mind, leaving you insane. Not something we want to happen to Harley.

After a quick stop at Wayne Manor, where Alfred seems more than a little under the weather and Tiffany Fox shows up with her own ideas for a suit to patrol in, we locate John to hopefully convince him to help take down Harley. John’s clearly beginning to lose his own grip on reality seeing Bruce’s attempt to stop Harley as a betrayal, while Harley herself has tossed John aside. It’s in these moments when you actually start to feel bad for John, and I found myself trying to comfort my “friend” all the while knowing I was essentially acting as a shoulder for The Joker to cry on. The game is really good at making your choices feel like shades of grey, a testament to the writing of the series.

John joins Bruce at a standoff situation between Harley and Amanda Waller, with Quinn threatening to detonate explosives and blow up a bridge unless she’s given Riddler’s blood. Bruce attempts to talk Harley down before John enters the fray and is surprisingly able to get the detonator out of Harley’s hands. All seems well until we realize that this is the moment that breaks John. “Thanks” to his broken friendship with Bruce, his hatred of Batman, and his loss of Harley’s affection, John detonates the bombs and escapes in the confusion. No longer is he John Doe, he has become the Joker. Rather than one bad day creating the Clown Prince of Crime, instead we see how it’s two broken relationships that create him. Cut to credits.

“What Ails You” continued the upward swing from the previous episode, using it’s 90 minute or so playtime to twist our expectations of what is driving these characters and how much the choices we make truly do matter. While it still feels like the individuals choices you are asked to make don’t necessarily impact the wider game, it still remains engaging enough to have you truly wonder if there can be redemption for the Joker. This episode was extremely light on puzzle elements, instead throwing in one fight scene in what is otherwise a dialogue-heavy episode. I didn’t mind, as the story itself was strong enough to help me forget that this is supposed to be a video game and not a movie. The only minor complaint about the story is how obviously telegraphed Alfred’s almost random sickness is and how it’s going to lead to a choice about giving him the cure-all in the final episode. Mark my words this is going to come up.

Final Thoughts: Overall the fourth episode of Batman – The Enemy Within pushed the story forward and leaves the player at the edge of their seat for what the finale may bring. I for one cannot wait to see how much damage this version of the Joker will be able to cause in a single episode.