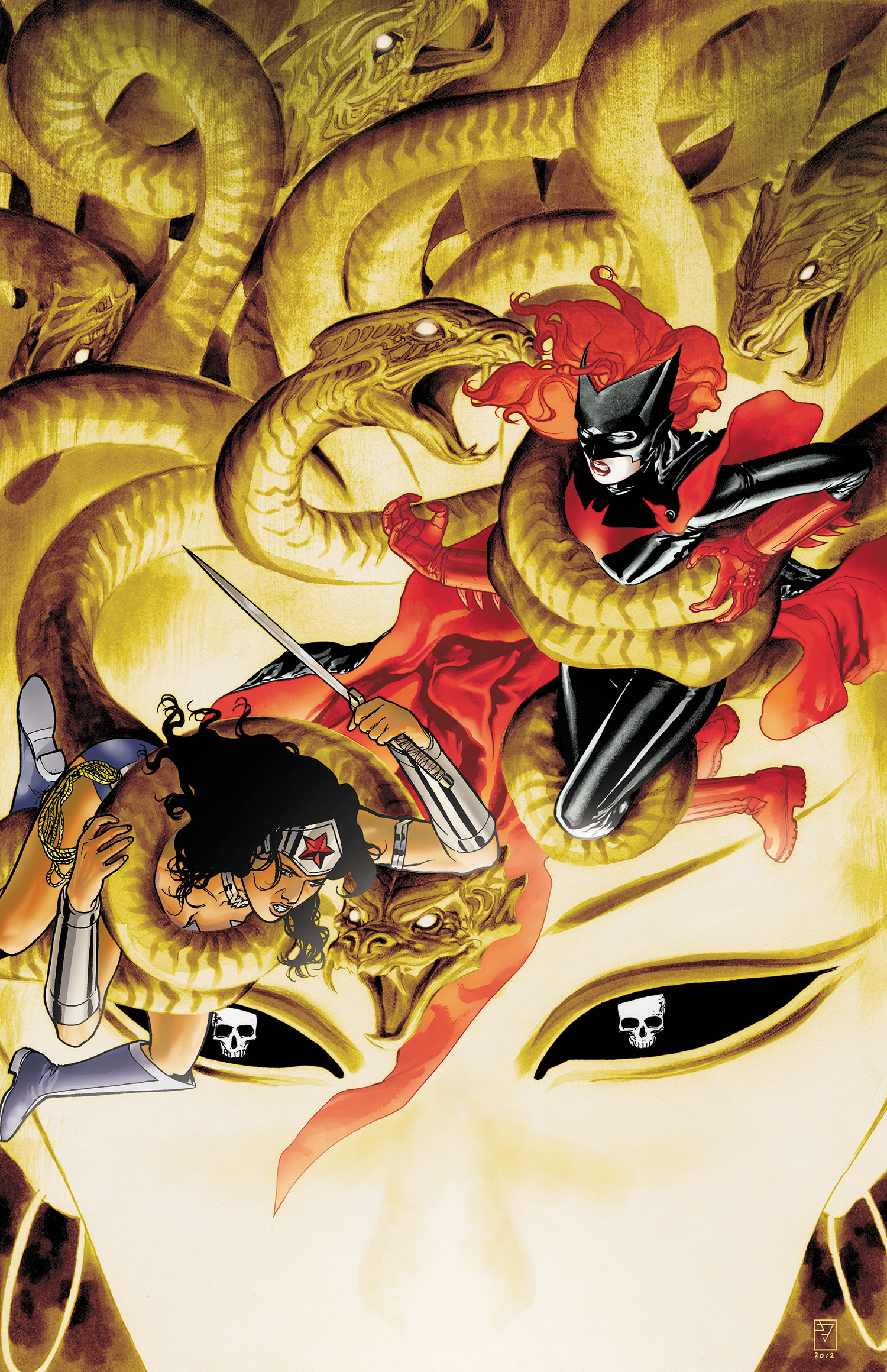 Continuing the story that begin at the beginning of the New 52, this book opens by introducing us to the two heroines set to star in this volume: Batwoman and Wonder Woman. Still on the trail of Medusa and Maro, Batwoman has enlisted Kyle Abbot and his were-beasts in order to help her. Travelling through a house of mirrors, Batwoman and Abbott see the origin of Bloody Mary reflected in the mirrors around them and see how her legend came to life. They eventually come to blows with Bloody Mary and Batwoman destroys the mirror that she was inhabiting. She then learns that Medusa is not a group, but their leader…the queen of monsters. Meanwhile Wonder Woman is also on the trail of Medusa as she battles against several of its agents as well as another terrifying monster.

Back in Gotham, Batwoman receives her new orders from Chase and Bones of the DEO. She is to find Wonder Woman, someone who has a knack for dealing with Greek monsters such as the gorgon Medusa. On the other side of the city, we see a protest against the GCPD who has still not uncovered any information regarding the missing children (see Batwoman #1 for when this all began). Kate attempts to comfort Maggie who is upset, but she is eventually kicked out.

Kate does eventually leave Gotham and tracks down Wonder Woman. However it is here where we are briefly side tracked into “Zero Month.” Throughout we see that Kate is writing a letter to her father, even though she still hates him for hiding the truth about her sister. We are shown how Kate and her sister were raised and the aftermath of the kidnapping where her mother died and her sister was supposedly lost as well. Colonel Kane attempts to comfort his daughter, and we see their bond grow as Kate joins the army. However after being drummed out under the “don’t ask, don’t tell” policy, Kate quickly spirals downward. It is then that a chance encounter with the Batman sets Kate on her destined path to become Batwoman. She begins to train herself and is eventually joined by her father who puts her through the toughest training imaginable.

What eventually comes out of the training is not quite Batwoman according to Kate. She explains that her father should have told her what really happened to her sister. The night that Alice fell from the airplane and she lost her sister once again was when she acknowledges that she truly became Batwoman.

Back in the present Batwoman and Wonder Woman descend in a sub to a place that Batwoman calls the “Amazonian Arkham Asylum.” Wonder Woman states that this is where the Amazons had imprisoned Medusa. However upon entering the catacombs they find nothing but carnage and bloodshed. The two are eventually attacked by a monster known as Nyx, and they attempt to question her on Medusa’s location. They eventually escape with a lead to find Medusa’s “horrid desert son.”

Meanwhile back in Gotham, a recovering Bette Kane finally begins her training with her uncle…something that was promised to her after she healed. Elsewhere Bones and Chase discuss the matter of Batwoman and how they can further manipulate her. Either by threatening her father until she reveals any information gleaned from Wonder Woman, or by placing her as a mole within Batman Inc.

Back with Wonder Woman and Batwoman, the two heroines journey to a desert and the home of Pegasus. It is here that they uncover that Pegasus had battled Falchion and suffered the consequences…he was dying. Pegasus reveals that Falchion attempted to recruit him to Medusa’s cause and reveals that Gotham City is where he will attempt to bring the Mother into this world. After giving Pegasus a warrior’s death, the two race off to Gotham.

All hell is breaking loose in the city when Batwoman and Wonder Woman arrive. They find the GCPD and several masked heroes battling the monsters and Medusa herself. It seems that she will be sacrificing the blood of the kidnapped children in order to bring forth the Mother. To halt them she unleashes all her monsters including a newly transformed Hydra which was once Killer Croc that begins destroying everything in its path.

We then flashback to before that battle started, and we find both Maggie and Chase on the streets attempting to stop the riot. Maggie is concerned about the families of the missing children who have gathered together in order to find their kids. Maggie pleads to let them handle the situation as Medusa has begun unleashing her troops on the city.

Cutting back to the present, Batwoman and Wonder Woman land on the streets and quickly enter the fray. We are treated to a brief origin of Ceto, the Mother of All Monsters as well as witnessing both Bones and the newly christened Hawkfire join the battle. Bette, now fully recovered and clad in a new identity, battles against the Hook.

Meanwhile Medusa begins to bleed the children into the ocean in order to summon the Mother. Batwoman arrives and begins to fight Medusa while Wonder Woman battles the Hydra. Batwoman eventually convinces the Weeping Woman to turn on Maro who is drowned and destroyed. However enough blood has spilled and the Mother begins to rise from the ocean.

All out war rages with Batwoman, Wonder Woman, Hawkfire and the were-beasts battling against Medusa and her monsters. Abbott is killed as Medusa turns him to stone and shatters him. The trio of heroines shatter Bloody Mary (once again) and turn a shard of mirror on Medusa. And like the Greek Hero Perseus before them, Medusa sees her own reflection and turns to stone. Batwoman then shatters her with a swift punch.

With their leader destroyed, the battle quickly ends and we see Ceto – the Mother of All Monsters walk out of the ocean. She explains that Medusa wished her to be the world’s destruction and that was how she was perceived. But with her death she is no longer under her control. With the arrival of the DEO, Wonder Woman flies off with Ceto in her care while Batwoman leaves with the recovered missing children.

The book closes with Batwoman coming upon Maggie sitting on a swing set surrounded by the missing kids. Maggie is astounded that Batwoman has found them and is bewildered when she calls her “Mags,” Batwoman then kisses Maggie and asks to marry her.

An epilogue finds Bones of the DEO opening the stolen sarcophagus seen all the way back in the pre-New 52 “0” issue of Batwoman…and we find that Alice has survived her tumble from the plane and is now in DEO care.

I don’t think I can praise this series enough. It is arguably one of the best of the New 52 and one of the better of the Batman titles. I guess being a complete sci-fi nerd, and Greek myth buff doesn’t hurt my cause either 😉

I really enjoyed this book, and series of volumes as a whole. I like that the problem facing Batwoman isn’t quickly wrapped up in six issues or so and spans over a year’s worth of issues. We get to see a complete story that follows not only Kate Kane but several important supporting characters as well. We see threats from Bones and the DEO, we saw the attack upon Bette Kane and how she shed the Flamebird identity to become Hawkfire. We see a beautiful romance blossom and become fleshed out between Kate and Maggie and finally we see the reappearance of Alice whom hasn’t been seen since Batwoman: Elegy (pre-New 52).

As I’ve stated before I love the mythology aspect of this series as well as delving into urban legend. This time around we see Bloody Mary’s bloody tale, as well as the reveal of Ceto who is the Mother of All Monsters.

I did think that using the mirror on Medusa was a bit cliché, but how else are you supposed to destroy the stony-eyed gorgon?

The writing and art are extremely well done, and anyone can find this volume a quick yet entertaining read.

I am definitely looking forward to the next arc in the Batwoman series, although it is sad to hear that this is the last for J.H. Williams and W. Haden Blackman. It will truly be sad to see these two original writers leave the series. I hope that they cook up something special for their finale…and I think that Bones being in possession of Alice may do just that.