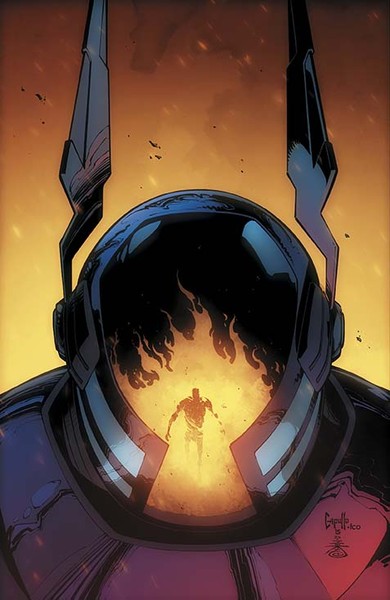 DC has released their solicitations for all ongoing titles for the month of July 2015.   July finds the All-New Batman (whose identity has now been leaked early) hitting the streets in the pages of Batman and Detective Comics.  Batgirl continues her fight against the All-New Batman in her ongoing title while having a run-in with Spyral and potentially Dick Grayson in Batgirl Annual #3.  Meanwhile, Dick Grayson is forced to confront Lex Luthor for the first time since Forever Evil in Grayson #42 and Damian faces the greatest rivals of the al Ghul family in Robin: Son of Batman #2.

Stephanie Brown makes a surprise appearance in Catwoman #42 and the group of Robins needs a leader in We Are Robin #2.  Harley Quinn continues her adventures with her gang of Harleys and with Power Girl, while Black Canary and her band mates get into a fight. The Justice League continues their war with Darkseid and the Justice League of America deals with an armada of religious zealots from space.  The GCPD Midnight shift has to deal with the toll of their work in Gotham by Midnight #7 and we get a tale of one of Gotham’s oldest ghost stories in Gotham by Midnight Annual #1.

The prequel comic for Batman: Arkham Knight continues and we get the beginning of a special new miniseries Batman: Arkham Knight – Genesis which will give the new villain of the upcoming video game a backstory.  Additionally, July brings a comic tie-in for Justice League: God’s and Monsters.  All of this and more including the continuation of titles like Batman Beyond, Bat-Mite, Red Hood/Arsenal, Midnighter, Injustice, Batman ’66, and Teen Titans will be coming in July.

DETECTIVE COMICS #42
Written by FRANCIS MANAPUL and BRIAN BUCCELLATO
Art by FERNANDO BLANCO
Cover by FRANCIS MANAPUL
TEEN TITANS GO! Variant cover by DAN HIPP
On sale JULY 1 • 32 pg, FC, $3.99 US • RATED T
The all-new Batman tries to find his place in Gotham City! But how can he manage his already uneasy relationship with the GCPD?

BATGIRL #42
Written by CAMERON STEWART and BRENDEN FLETCHER
Art by BABS TARR
Cover by CAMERON STEWART
On sale JULY 22 • 32 pg, FC, $2.99 US • RATED T
Batgirl can barely hold her own in combat against the new Batman… so what happens when Livewire joins the fight with the intention of taking them both out?

BATGIRL ANNUAL #3
Written by CAMERON STEWART and BRENDEN FLETCHER
Art by BENGAL and others
Cover by BENGAL
On sale JULY 29 • 48 pg, FC, $4.99 US • RATED T
On her latest mission, Batgirl finds herself mixing it up with Helena Bertinelli of Spyral…but who is the mysterious Spyral agent who seems to be one step ahead of her at every turn without ever showing his face? She’s determined to crack this mystery – but Grayson is just as determined not to get caught! Plus: Batgirl visits Gotham Academy – and there are plenty of surprises in store for her!

WE ARE…ROBIN #2
Written by LEE BERMEJO
Art by ROB HAYNES and KHARY RANDOLPH
Cover by LEE BERMEJO
1:25 Variant cover by RAFAEL ALBUQUERQUE
On sale JULY 22 • 32 pg, FC, $3.99 US • RATED T
In Gotham City, hundreds of Robins have taken to the streets. But who will be their new leader? And who is the mystery man working behind the scenes?

CATWOMAN #42
Written by GENEVIEVE VALENTINE
Art by DAVID MESSINA
Cover by KEVIN WADA
TEEN TITANS GO! Variant cover by BEN CALDWELL
On sale JULY 8 • 32 pg, FC, $2.99 US • RATED T+
Everything Selina Kyle accomplished as both crime boss and Catwoman is about to be ruined when Stephanie Brown makes a guest appearance!

HARLEY QUINN #18
Written by AMANDA CONNER and JIMMY PALMIOTTI
Art by CHAD HARDIN
Cover by AMANDA CONNER
TEEN TITANS GO! Variant cover by BEN CALDWELL
On sale JULY 8 • 32 pg, FC, $3.99 US • RATED T
The Gang of Harleys rocks on with a super fun appearance by Captain Strong! Yes, that is a real character, we promise!

HARLEY QUINN AND POWER GIRL #2
Written by AMANDA CONNER and JIMMY PALMIOTTI
Art by STEPHANE ROUX
Cover by AMANDA CONNER
On sale JULY 15 • 32 pg, FC, 2  of 6, $3.99 US • RATED T
Vartox is a totally creepy and super macho space dictator – though he is terrible fond of Power Girl. Harley and Power Girl are not terribly fond of him. Violence and shenanigans begin in 3…2…1…

BLACK CANARY #2
Written by BRENDEN FLETCHER
Art and cover by ANNIE WU
1:25 Variant cover by BABS TARR
On sale JULY 15 • 32 pg, FC, $2.99 US • RATED T
In the wake of their first major fight, Dinah’s realized that her new bandmates are completely unprepared to keep themselves alive in a scrap…so it’s time for a training montage! (Cue the squealing guitars!) Plus: Who is Bo Maeve, and why does she hate Black Canary so much?

JUSTICE LEAGUE #42
Written by GEOFF JOHNS
Art and cover by JASON FABOK
TEEN TITANS GO! Variant cover by DAN HIPP
On sale JULY 15 • 32 pg, FC, $3.99 US • RATED T
The epic “Darkseid War” event storyline continues with the critically acclaimed team of Geoff Johns and Jason Fabok! As Darkseid and the Anti-Monitor maneuver toward inevitable war, Wonder Woman leads the Justice League against a force that holds the answers on how to stop it – but the price might be Batman’s soul! Meanwhile, Mister Miracle faces off against a mysterious hero who has been fighting in the shadows for decades!

TEEN TITANS #10
Written by WILL PFEIFER
Art by KENNETH ROCAFORT
Cover by BENGAL
TEEN TITANS GO! Variant cover by BEN CALDWELL
On sale JULY 22 • 32 pg, FC, $2.99 US • RATED T
The hunt is over and the battle begins as Wonder Girl and Power Girl’s new team catches up with the Titans to bring Superboy to justice.

NEW SUICIDE SQUAD #10
Written by SEAN RYAN
Art by PHILIPPE BRIONES
Cover by JUAN FERRERYA
TEEN TITANS GO! Variant cover by CRAIG ROUSSEAU
On sale JULY 8 • 32 pg, FC, $2.99 US • RATED T+
What do you get when you take on an unstable breakaway faction from the League of Assassins? Dead Squad members, that’s what!

GOTHAM BY MIDNIGHT #7
Written by RAY FAWKES
Art by JUAN FERRERYA
Cover by BILL SIENKIEWICZ
TEEN TITANS GO! Variant cover by SEAN “CHEEKS” GALLOWAY
On sale JULY 22 • 32 pg, FC, $2.99 US • RATED T+
The responsibilities of the Midnight Shift can take its toll on even the bravest. What trials has Lt. Weaver endured – and has he reached his breaking point?

GOTHAM BY MIDNIGHT ANNUAL #1
Written by RAY FAWKES
Art by CHRISTIAN DUCE
Cover by JUAN FERRYRA
On sale JULY 29 • 48 pg, FC, $4.99 US • RATED T+
Get set for a tale of love and vengeance in this centuries-old mystery for the Midnight Shift – and the Gentlemen Ghost!

GOTHAM ACADEMY #8
Written by BECKY CLOONAN and BRENDEN FLETCHER
Art by HELEN MINGJUECHEN
Cover by KARL KERSCHL
TEEN TITANS GO! Variant cover by SEAN “CHEEKS” GALLOWAY
On sale JULY 8 • 32 pg, FC, $2.99 US • RATED T
Classes are suspended for a funeral. So, is it really true that grieving students get all A’s?

BATMAN BEYOND #2
Written by DAN JURGENS
Art and cover by BERNARD CHANG
1:25 Variant cover by ANDY KUBERT
On sale JULY 1 • 32 pg, FC, $2.99 US • RATED T
Thirty-five years in the future, Batman’s gotten himself caught in a P.O.W. camp where the enemy refuses to give up trying to crack the only “data source” he can access – the human mind! And this foe doesn’t care how many people he has to burn through to get there, including original Batgirl Barbara Gordon! To make his great escape, Batman will have to take down both his greatest hero and a traitor to humanity! Featuring the DC Universe debut of Batman Beyond-villain Inque!

EARTH 2: SOCIETY #2
Written by DANIEL H. WILSON
Art and cover by JORGE JIMENEZ
1:25 Variant cover by PAULO SIQUEIRA
On sale JULY 8 • 32 pg, FC, $2.99 US • RATED T
After the shocking assassination of one of Earth-2’s most prominent leaders, humanity’s survivors struggle to believe their world can last. Can even Superman help build a society better than their previous world?

BAT-MITE #2
Written by DAN JURGENS
Art and cover by CORIN HOWELL
On sale JULY 1 • 32 pg, 2 of 6, FC, $2.99 US • RATED E
Bat-Mite assists Batman on yet another case…whether the Dark Knight needs his help or not. This time, it leads the imp to the diabolical Doctor Trauma, who has terrible plans in store for Hawkman!

MIDNIGHTER #2
Written by STEVE ORLANDO
Art and cover by ACO
1:25 Variant cover by KEVIN WADA
On sale JULY 1 • 32 pg, FC, $2.99 US • RATED T+
Marina Lucas woke up this morning as a suburban martial-arts instructor…but when God Garden tech unexpectedly falls into her lap, she’ll end the day as the deadliest woman on the planet! That’s bad news for her – and worse for the Midnighter!

BATMAN ‘66 #25
Written by JEFF PARKER and GABE SORIA
Art by JESSE HAMM and TY TEMPLETON
Cover by MICHAEL ALLRED
On sale JULY 22 • 32 pg, FC, $2.99 US • RATED E • DIGITAL FIRST
Driven mad by the Clown Prince of Crime’s “Joker Wave,” The Joker’s former prison doctor enters the Caped Crusader’s Rogues Gallery as The Harlequin! Then, a team of Batman’s greatest enemies takes over an advertising agency to create a new public image for themselves. But the agency has a new temp working for them…none other than Barbara Gordon, young daughter of Gotham City’s police commissioner!

INJUSTICE: GODS AMONG US YEAR FOUR #5
Written by BRIAN BUCCELLATO
Art by BRUNO REDONDO and JUAN ALBARRAN
Cover by TOM RANEY
On sale JULY 8 • 32 pg, FC, $2.99 US • RATED T • DIGITAL FIRST
The appointed “Judgment by Combat” continues between erstwhile allies Superman and Wonder Woman. Just when it looks like there might be a winner, all hell breaks loose, and the Amazons get into a full-scale war against The Man of Steel’s army of Super Soldiers.

INJUSTICE: GODS AMONG US YEAR FOUR #6
Written by BRIAN BUCCELLATO
Art by MIKE S. MILLER
Cover by NEIL GOOGE
On sale JULY 22 • 32 pg, FC, $2.99 US • RATED T • DIGITAL FIRST
The Gods now directly enter the fray and order Superman to step down. But Superman simply going into retreat is not something Batman thinks is a good idea, knowing from experience that he’ll regroup and return. Meanwhile, Wonder Woman has been ordered to leave Superman’s side, and that’s not going to sit well with her, to say the least.

BATMAN: ARKHAM KNIGHT #6
Written by PETER J. TOMASI
Art by IG GUARA and JULIO FERREIRA
Cover by DAN PANOSIAN
On sale JULY 1 • 40 pg, FC, $3.99 US • RATED T+ • DIGITAL FIRST
Just when Bane gets the upper hand on Batman, a surprising ally joins the fight and changes the tide of battle! But when an explosion leaves everyone under an abandoned part of Arkham City, the Dark Knight must fight his way back to the surface!

JUSTICE LEAGUE: GODS AND MONSTERS – BATMAN #1
Written by J.M. DeMATTEIS and BRUCE TIMM
Art by MATTHEW DOW SMITH
Cover by FRANCESCO FRANCAVILLA
1:10 Variant cover by DARWYN COOKE
ONE-SHOT • On sale JULY 22 • 40 pg, FC, $3.99 US • RATED T • DIGITAL FIRST
Prequel to the DC Universe movie Justice League: Gods and Monsters!
In this story, Kirk Langstrom has been transformed into a blood-sucking creature of the night, preying on society’s dregs. Will a new friendship allow him to find his lost humanity or turn him into a soulless monster once and for all?