Review: Shadow of the Batgirl 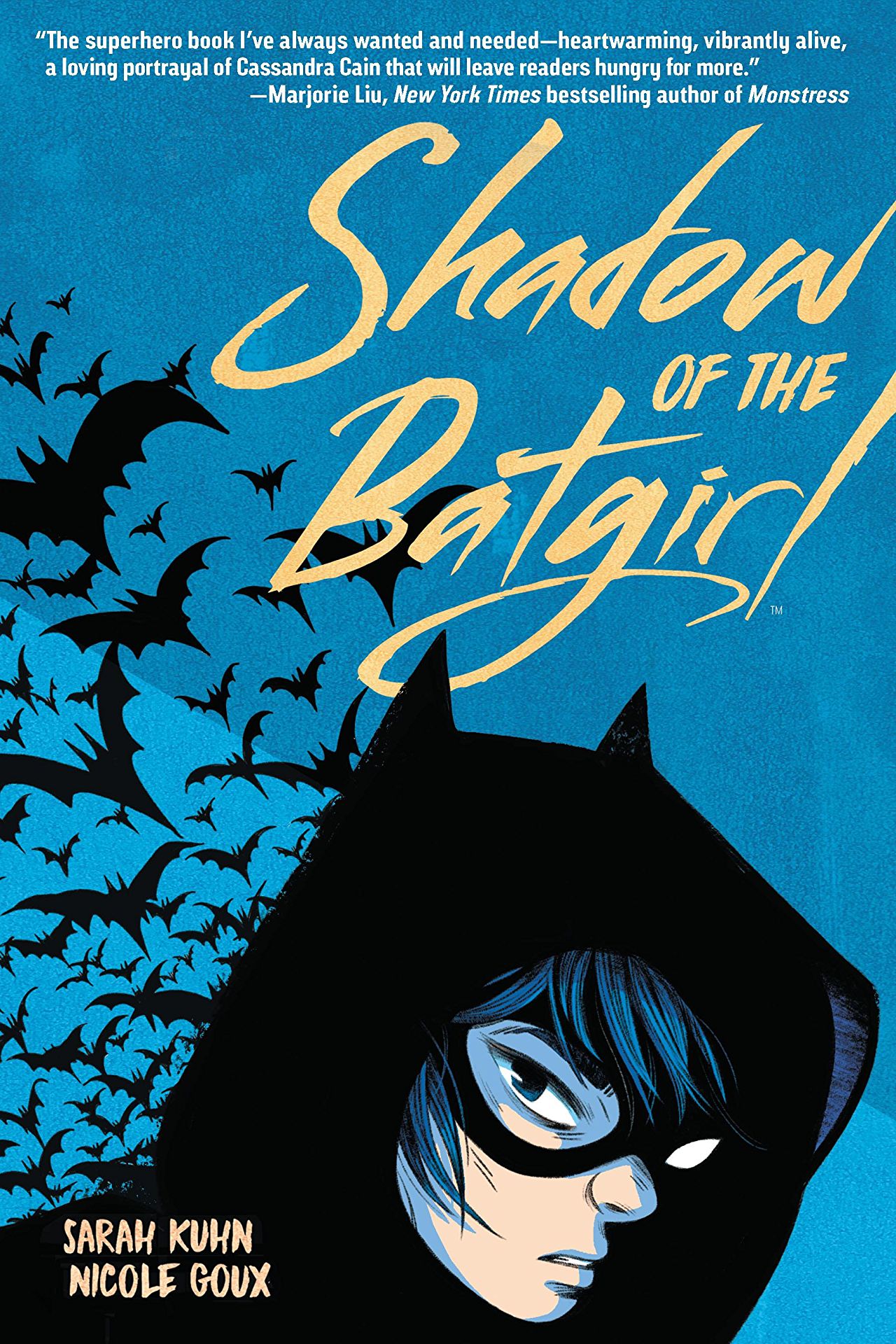 Overview: In this DC young adult graphic novel starring the Batgirl of the 21st century, Cassandra Cain abandons the life of a deadly assassin and searches for a new identity. Written by seasoned novelist Sarah Kuhn with artwork by Nicole Goux, Shadow of the Batgirl introduces new audiences to the world of the popular Bat-Family character.

Synopsis (spoilers ahead): Assassin Cassandra Cain, daughter of super-assassin David Cain, abandons her life as a killer upon hearing the word “daughter” uttered from her latest victim. Wandering around the streets of Gotham, Cassandra finds shelter at the local library and immerses herself into the world of language and information, a new experience free from the violence she’d come to know growing up.

She also meets Jackie, owner of a noodle shop, Erik, a young athlete whose interests lean more towards writing, and Barbara, tutor and data analyst at the Gotham Library. It’s from the latter that she’s introduced to the hero Batgirl, Gotham’s defender against evil who had mysteriously vanished some time ago. Inspired by the legend of Batgirl, Cass fashions herself a costume and seeks to redeem herself by becoming a hero. The road to redemption and self-understanding can be a difficult one, especially when you don’t know how to read, write, or speak. Cass has to navigate these obstacles if she wants to rediscover herself, not to mention settle the score with her deadly father.

I’m not the only one who does. With the development of the internet in the twenty years since the character’s ongoing first debuted in January 2000, Cass Cain has enjoyed a somewhat cult-like following that has made itself more visible online with each new cornerstone of the Bat-Family. Appearing at a time where the concept of the Bat-Family had really begun to solidify after a decade of slow formation with other characters such as Spoiler, Azrael, and the Huntress joining Batman, Robin, Nightwing, and Oracle, Cass’ journey of self-discovery, identity, and exorcising of past demons gave fans a fresh take on a Batman-related hero who was every bit as different than the other favorites, yet worked well with them all the same. Books like her own Batgirl series (initially written by Kelley Puckett and illustrated by Damion Scott), Gotham Knights by Devin Grayson, Scott Peterson and Roger Robinson and others gave fans a foundation of how she operated as a new, yet accepted part of Batman’s world. It was the kind of character success that most long-running franchises always pine after.

Then she was gone.

Okay, that’s not quite the sequence of events. Fans know that Cassandra’s character went through a tornado of bad mandates from editorial and shuffling around from book to book, never finding a permanent place to exist until he New 52, where she vanished altogether. There can be conflicting reasons found online, but the agreed-upon summation is that the Batgirl iteration that Cassandra embodied wasn’t what DC Comics preferred audiences to understand the character as, with Barbara Gordon being perceived as the reliable favorite. (Indications of this are plainly evident going as far back as the advertisements for the 2009 Batgirl series, which by all accounts was originally intended to have Barbara back in the cape and boots.) This isn’t the only instance of DC taking back a modern version of a character in favor of an older version, but the point remains that in the fourteen years since her series ended, Cassandra has rarely found a story that features her as the lead protagonist.

That is until now, with Shadow of the Batgirl. In the introduction by Sarah Kuhn, the author writes how the connection she felt with the character came from the idea that Cass couldn’t see herself as a hero, when in fact she was. This helped validate Kuhn and many other Asian-American readers who often felt othered as sidekicks, cautionary tales or one-off bit characters in various forms of media. But that’s always what Cassandra’s story tends to lean towards since the end of her ongoing series, isn’t it? The first non-white character in the Batcave, she’s often relegated in history as the “Asian Batgirl,” not the first Batgirl to lead her own ongoing title. With such a history of downsizing, a book like this is akin to a gasp of fresh air after years of enjoying clouds of soot.

The plot is the Cassandra Cain essentials. Fleeing after an assassination ordered by her father David Cain, Cass goes off in search of… for what, she doesn’t even know. There’s the text of her being raised functionally illiterate and mute (which occurs here but isn’t as large of an obstacle as it was rendered in the comics, which is forgivable given the much smaller space of the story), but the real confusion is how she can define herself on her own terms and how often that ends up being compared to other characters. One of Cass’ leading character traits is guilt, an emotion that finds itself in every Bat-Family member at one point or another (hell, every superhero ever), but is rarely made justifiable beyond basic survivor’s guilt. It’s generally a toxic emotion, grafted onto stoic badasses who don’t let themselves get attached to smiling characters because they can’t risk letting anyone get too close or else they might LOSE THEM TOO.

Cassandra’s guilt is more childlike and more believable. She withdraws herself from people not out of self-righteousness but out of fear and self-loathing that’s expressed through confusion, not posturing. The scenes of withdrawal aren’t made for the sake of impressing audiences, they’re for achieving a sense of true isolation. Running away from characters in the middle of a scene or awkward conversation would be made a repeated joke in a lesser work, but it’s always depicted as a dead-end in this story. The inference is that, sooner or later, Cassandra will find herself alone because she can’t relate to anyone (or so she thinks) because she’s different (or so she thinks). The discovery that there are others like her who feel things similar to what she feels is the discovery that she’s not just not as alone as she thought, that’ she’s okay. It’s a wonderful message for young readers and one totally in concert with the character.

In comparison to the original comics, this story adapts the most centrally integral elements about Cassandra faithfully enough. David Cain isn’t in this much at all and is a minor, one-dimensional criminal for Cassandra to aim her hatred at, but that’s about expected. Cain’s character from the Puckett and Scott run was vastly more complex and interesting, but like Cass’ illiteracy fading away throughout the book, the needs of the book necessitates some shorthand. Cain and Cass’ relationship would also warrant a psychologically stronger story than what this intends, and once again there’s not enough room for that. The focus on Cassandra takes center stage, and that also pushes other elements to the margins with some surprises. Despite being a key figure, Barbara Gordon’s inclusion is thoroughly a supporting role and less of the surrogate mother figure which was the space she occupied in the comics. Batman is never mentioned or referenced, and only Commissioner Gordon (and Shiva, momentarily) is obliquely hinted at a couple of times. In this way, the book reminds me of the Miles Morales Spider-Man novel by Jason Reynolds, which had zero references to anything having to do with the outer Marvel world, including Peter Parker, and just stuck on Miles’ life at the moment.

I’ll admit, part of me missed seeing a burgeoning family development with Bruce Wayne and the other members of the Bat-Family, and it’s something I think I’ll label as integral to Cass’ whole story. But the decision to omit is sound. Getting bogged down in the weeds of where Cassandra fits in other worlds isn’t the point of this book, and its achievement lands at something greater than sticking her pin in a larger Bat-Continuity. Cassandra Cain is a wonderful, multi-dimensional character who stands on her own with ease, and having readers connect to her makes good on a more immediate concern.

If I have any criticisms, they’re about as inoffensive as I can think of. Nicole Groux’s artwork is delightful with wonderful colors by Cris Peter, evoking Bryan Lee O’Malley’s style at times, other times like Paul Pope. There are specific panels and scenes (such as Cass against the library’s window pane during a rainstorm) that evoked the sense of atmosphere evinced by Damion Scott in the old days. However, her style doesn’t lend easily to an action book, so often you’ll see Cassandra rely on the same full-nelson headlock throughout the book with little variation. While that may have been intentional as a finishing move, other times it can be hard to realize what’s going on in the action. The fighting generally reads as very stiff and not as intense as it is going for.

There’s also some language that completely goes against the art style and overall feel of the book. Understanding that YA novels are subject to all kinds of relatable content understood by teenagers, the singular use of the word “bullshit” landed like a missed note. It’s not so much that the word itself was objectionable, but up to that point the swearing had been spare and barely noticeable and the violence had been mostly referred to and off-screen. This reads like it can be given to any double-digits young reader, so that word is going to hurt more than augmenting readers if parents find it offensive.

Final Thoughts: Overall I’m quite happy with how this story ended up, and it rounds back to the fact that despite a decade of publishing hardship, there is a lot to Cassandra Cain that can and does still appeal to readers and audiences alike. Anticipation for this book had been warming up for a long time, and the wait was worth it. Whether or not this is granted a sequel potentially involving Lady Shiva is yet to be seen, but as it stands, this is easily the best Cassandra Cain Batgirl content since she was Batgirl. A must-read for Cass fans everywhere.