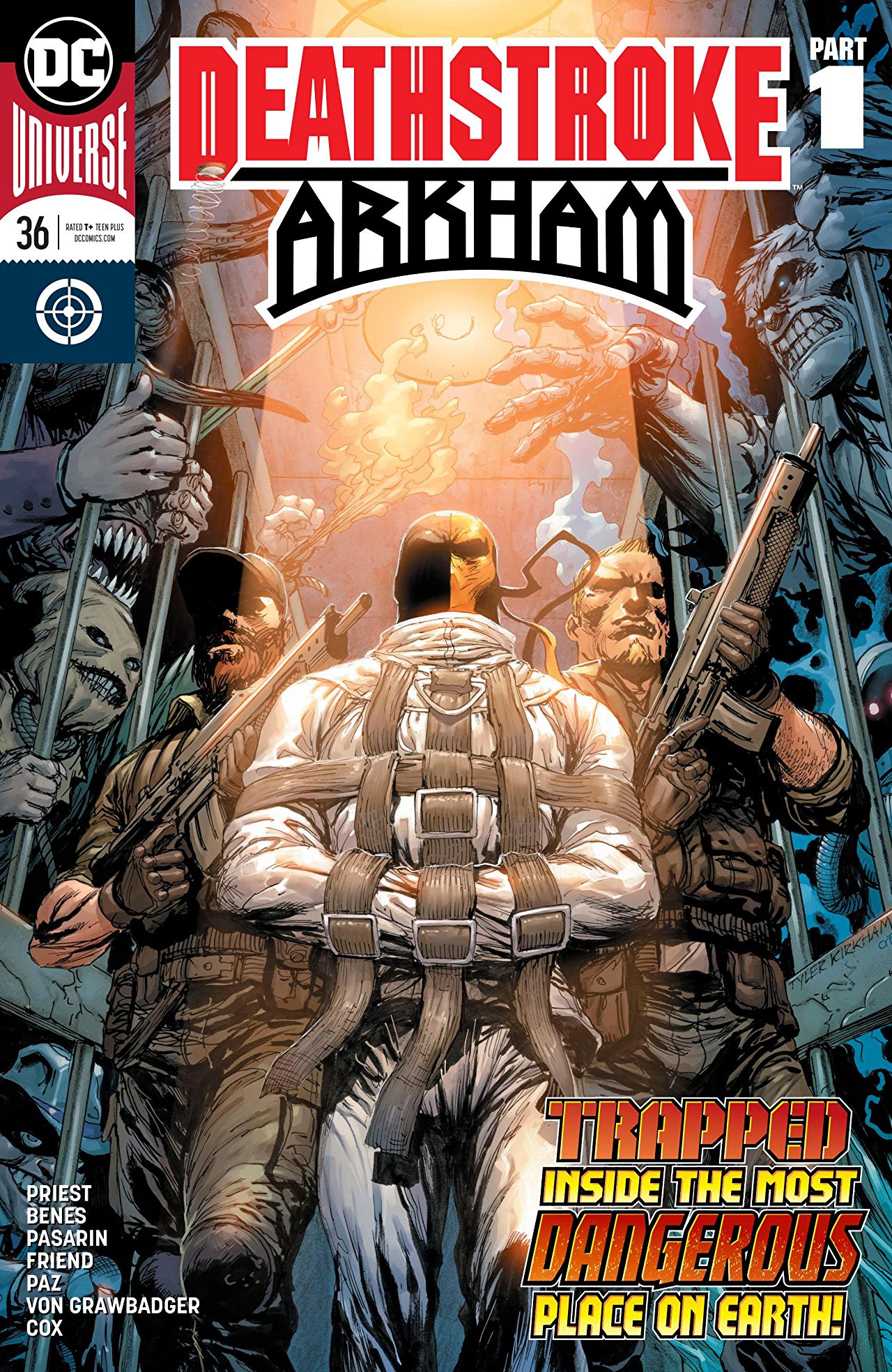 Overview: Slade Wilson, trapped in Arkham Asylum, fights for sanity as all avenues to reality warp around him.

Synopsis (spoilers ahead): We open with Deathstroke slitting Riddler’s throat in the dark, then opening fire on a massive group of Batman’s villains, slaughtering them until one of them turns out to be Joseph, his son. The shock allows Two-Face and Zsasz to take him down, shooting his legs and stabbing his remaining eye, which shocks Slade awake in his padded cell at the heart of Arkham Asylum. Lying on the floor, he learns from his possibly hallucinated, possibly cybernetically implanted AI Wintergreen, that twenty-two days have passed since his ex-wife Adeline, the real Wintergreen, and former technical supplier Dr. Isherwood captured him and put him away. He vomits because of the gas and medication the asylum forces on him to suppress his healing and cognitive powers. AI Wintergreen, who Slade calls “Billy,” claims to be real, and shows him detailed 3D blueprints of the asylum with an escape route.

In Brooklyn, Hosun, Deathstroke’s former tech guy and current son-in-law, finds Rose Wilson lying passed out and covered in blood and injuries from her nightly excursions. Willow, the spirit of an ancient Hmong warrior princess, has been possessing her to destroy her ancient enemies the White Lotus, who murdered her friend, the nun Claire, in the same fight that resulted in Deathstroke’s imprisonment.

In Arkham’s virtual reality treatment sessions, Deathstroke meets with therapist Dr. Evans and the other villains previously seen in their cells. One additional member appears – Devon, also called Space Man, who hacks the VR to appear as Harley Quinn. The doctor insists he restore a more “normal” appearance, and he rants about aliens abducting him. Freeze, Zsasz, and Destiny all philosophize about the sickness of the society which imprisons them, to which Deathstroke scoffs and asks if any of them wouldn’t kill him given a chance. None of them dissent, and Dr. Evans asks about Billy, probing into the possible hallucination. Hugo Strange suggests that Deathstroke test his delusion to cure it.

In the Bronx, Joseph Wilson tests out his new Jericho suit, rebuilt by Hosun based on Power Girl’s (Tanya Spears) notes. Hosun brings up Rose’s problem, suggesting that Joseph dress up as Deathstroke to snap Rose out of Willow’s control.

After therapy, Slade decides to take Strange’s advice, and test Billy’s blueprints. Crawling through the sewer systems, he finds Devon, the Space Man. Babbling about aliens, Dev is dragged along by Deathstroke out into the lawn of the asylum, where they are both pinned by a spotlight. However, the light doesn’t come from a guard tower, but some kind of tractor beam, dragging them both into the sky, as Devon tells Deathstroke that his lack of knowledge is why he won’t get a movie.

Analysis: And we’re back! After seven months of a glorious Batman-filled standalone arc, Christopher Priest picks up just twenty-two days after the ending of Chinatown (Deathstroke #29). With Slade locked up in Gotham’s Arkham Asylum with some of Batman’s choicest rogues, we’ll be reviewing this title for a little while longer – and that’s excellent since the title has been one of the most satisfying and challenging DC has put out since Rebirth started. Arkham: Book One, “The Republic” is no exception – Priest catches the new readers up in the opening dream sequence, which sets the tone for this reality-bending issue. The title of this issue also underlines a question Slade asks himself in his dream sequence – is he a just man, or just a man? As Priest’s entire run on Deathstroke has explored that very question – is Deathstroke a monster, or someone necessary to the functioning of a broken world? – this arc will certainly bring that question around again. But the rest of the issue is a rollicking and blackly hilarious showing of Deathstroke in the insane asylum.

In DC Nation’s past several issues, Priest has mentioned doing a lot of research on Arkham, and it shows. Instead of the grimly modernist and industrial building drawn by Alvaro Martinez in James Tynion’s Detective Comics and Mikel Janin in Tom King’s Batman, Fernando Pasarin (who picks up art duties after Ed Benes handles the opening dream sequence) follows David Finch’s work in King’s “I Am Bane” arc, drawing Arkham as more of a decaying Victorian mansion/castle with industrialized overlay/refurbishing. The interiors, however, don’t reflect Finch’s more literal depiction of a Panopticon-like structure of massive banks of glass doors, instead going with a more modernistic all-seeing-eye of cameras and virtual reality. Pasarin also creates a lovely visual for the Arkham blueprint hologram, in contrast to the much more barebones blueprints seen in Miguel Mendonca’s rendering in Detective Comics #971 – including a fun look at the pipes and underground structures which ultimately lead to Slade’s escape attempt. Though Pasarin’s very characteristic wide face-drawing appears prominently in several panels, the inks by Richard Friend, Jason Paz, and Wade von Grawbadger, colors by longtime Deathstroke colorist Jeromy Cox, and letters by Willie Schubert help smooth Pasarin’s idiosyncrasies into feeling like part of the Deathstroke visual language so far.

The specific cast of characters poses several continuity questions. Obviously, Hugo Strange has been in Arkham since Night of the Monster Men. Zsasz since The Cursed Wheel (All-Star Batman backup) and also appeared as a prisoner in Tom King’s “The Secret Origin of Bruce Wayne” one-shot issue. Batman #50 also established the Tweedle twins as being captured, but in the current Detective Comics arc, the Tweedles and Two-Face are tormenting Batman (not to mention the in-and-out nature of Two-Face since Rebirth began, imprisoned during “I Am Bane,” and free during Gotham Academy: Second Semester, and all over the place for All-Star Batman’s “My Own Worst Enemy”). Batman #51-53 focused on how Mr. Freeze was free and Bruce bribed his way onto a jury to make sure he wasn’t sent back to prison because of Batman’s error. Possibly this arc takes place before the current arc of Batman, or Freeze was sent back for a parole violation, which was mentioned in that “Cold Days” arc. John Dee, Dr. Destiny, doesn’t often appear in books these days but had a viciously memorable arc in Neil Gaiman’s classic “Sandman” title’s first trade collection.

Dr. Destiny’s mind-control powers highlight the multiple potentials for unreality in this arc – virtual reality, dreams, mind-control, Hugo Strange’s psychological manipulation, and the blatant psychosis of Devon, a brand new character, and one not seen before, leaving many questions open about his role in Deathstroke’s story.

As with all Priest books, though, the questions will have to wait – but that’s fine since he’s layered so much humor in the book, especially through Devon’s dialogue, such as the wildly cheeky “Wakanda forever” line during group therapy. DC has been phasing glossy paper for their single issues out for the past six months, and after the completion of Deathstroke vs. Batman, this new arc starts with the thicker, rougher textured paper which doesn’t quite hold blacks as well as the glossy material. However, instead of the twenty pages per issue of the past thirty-five issue, we get twenty-two full story pages, which I will take over higher quality paper any day. Especially when those twenty-two pages are written by a master like Priest, and drawn with care by Pasarin, Benes, and the rest of the art team. Next month – Martians!

Final Thoughts: Priest returns to his long-running storyline and pits Deathstroke against Batman’s rogues for a hilarious and mind-bending opening issue.