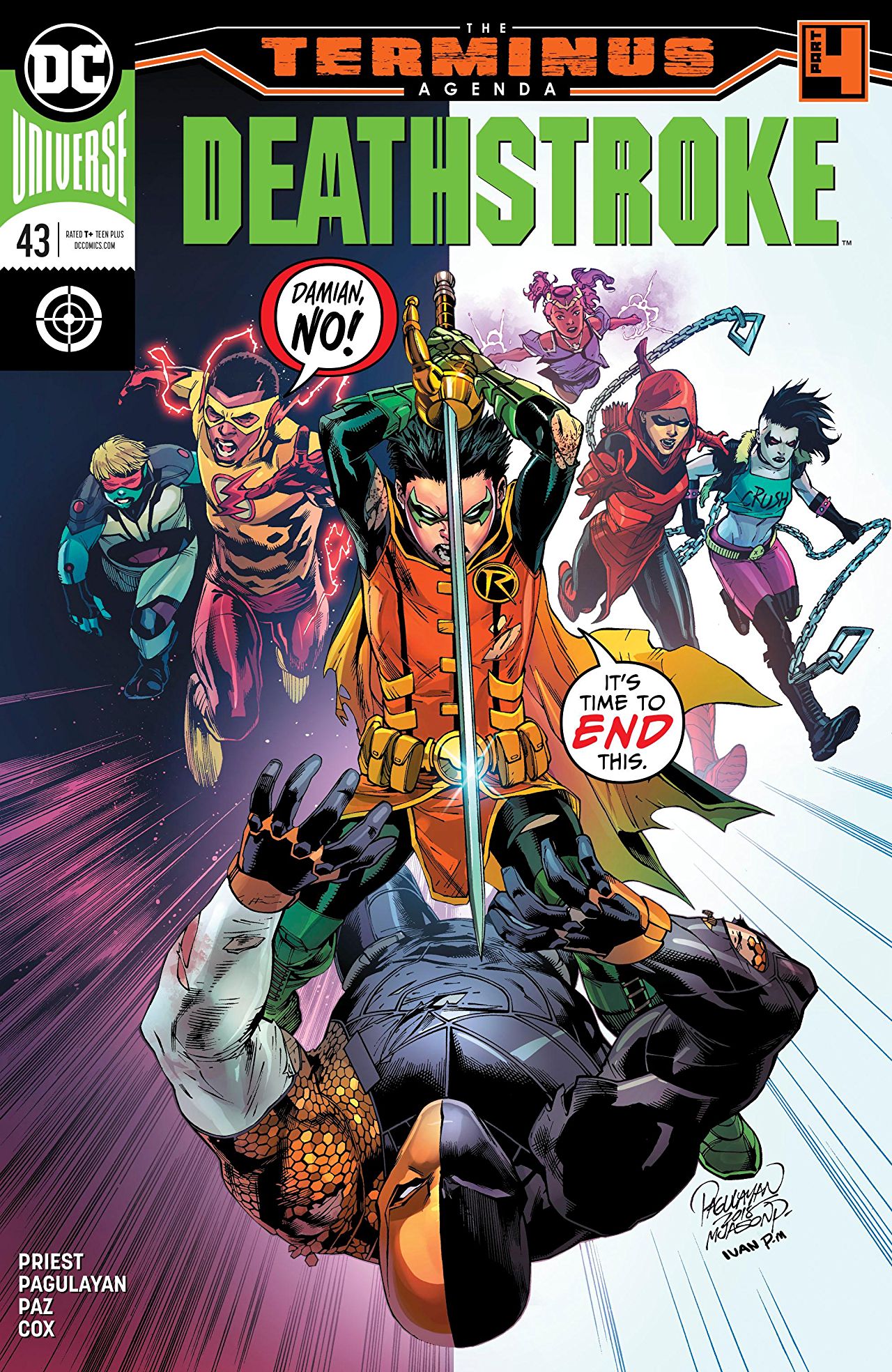 Overview: “The Terminus Agenda” ends decisively as the Teen Titans fight off the onslaught of villains Damian had imprisoned.

Synopsis (spoilers ahead): Years ago, Damian trained brutally on Mother’s Day, as Talia tells her servants to kill him if he fails again.

Now, all of the villains Robin imprisoned have been let free, and he locks the compound down to prevent them from getting out, then slides out of the room through an escape hatch. Deathstroke awaits him below (as his artificial intelligence assistant narrates).

The rest of the Teen Titans deal with the power failure caused by the villains’ attack, and Deathstroke reveals that he activated Damian’s Terminus protocol. The boy wildly attacks Slade, blood streaming from his injured eye, and Slade restrains him, asking why Damian hates Slade so personally. Damian cannot answer, and Slade leaves, but his AI meshes with Damian’s comms, giving him yet another voice in his head.

As the villains bicker, Kid Flash notices they are about to get free. He blocks one exit, so they head to the living quarters, as Wally alerts the others. Robin insists on facing Deathstroke alone, as the rest of the Teen Titans engage the villains. Flash confronts Robin about his grudge match with Slade and discovers that Robin fixates on Deathstroke because of his issues revolving around his biological parents. As the Teen Titans recapture the villains, Robin faces the last (except Deathstroke), revealing that all of them have a toxin failsafe – if they leave, they die.

On the roof, Deathstroke and Robin face off. Slade reveals that one of the other Teen Titans released the prisoners – he only activated the toxin failsafe – the Terminus protocol. Slade tried to “fix” Robin – push him to be honest with himself about his darker impulses and make the “logical” choice to kill his enemies, but has realized that he cannot. To prove the point, he takes off his armored mask and hands his gun to Damian. Though Damian raises the gun, he stands frozen.

Red Arrow takes the shot, putting one of her arrows straight through Deathstroke’s empty eye socket, and Slade Wilson collapses to the rooftop as the rest of the Teen Titans look on in horror.

Analysis: As this “Terminus Agenda” crossover with the Teen Titans title comes to an end, so too does TBU’s coverage of the Deathstroke title. For a truly wonderful year, I’ve gotten the chance to review the title I think has been the most consistently excellent book DC has put out with their Rebirth initiative. While many other runs have also been excellent – Greg Rucka’s magnificent Wonder Woman, James Tynion’s rollicking and thoughtful Detective Comics, and Tom King’s poetic Batman – only Christopher Priest and his main art team of Carlo Pagulayan and Jeromy Cox have remained on one book since the start of the relaunch and maintained as high a level of quality. From the epic trolling between Batman and Deathstroke, to the mind-bending examination of Slade’s sanity in Arkham Asylum, and now the culmination of all Deathstroke’s simmering conflict with Robin, it’s been a truly great ride. I hope if anyone’s started reading this title because of TBU’s coverage, they will keep going on the book, as even without a Batman connection, it will surely justify your read – and it will likely wrap up before too long with issue #50, so it won’t tax your bank account too much!

On to the actual review! While maintaining a more straightforward approach to the storytelling than his usual chronologically scattershot structures, and employing the Wintergreen AI narration to unveil some of Deathstroke’s normally implied rather than stated motivations, Priest still manages to layer so much meaning and subtlety into the writing. From Damian losing the use of one eye, causing him to become a literal mirror of Deathstroke, to the way Deathstroke forces Damian to confront his true target – the abuse and lack of care from his mother – every line works to provide an intense sense of tragedy as well as the moments of absurd pleasure that come from all excellent superhero or supervillain comics. Touches of wit, such as Emiko wearing her mask while she’s still in her pajamas, or the failure of a microwaveable dinner for a hungry Teen Titans, lighten the mood to fit with the more teenage soap opera tone, but don’t distract from the fundamental gravity of the story.

Series main artist Carlo Pagulayan provides excellent linework, with his trademark beautifully rendered hair and sense of composition, with an assist from Sergio Davila and Pop Mhan. Jeromy Cox continues to provide the coloring glue holding the various pencilwork and inks together, giving the issue an overall blue tint, emphasizing the tragedy of the story.

Pagulayan’s main cover continues with the really nice set of covers split down the middle compositionally, playing with the theme of Deathstroke’s appeal to Damian’s dark half, while his light half resists. The bifurcated composition also resonates with Deathstroke’s Rebirth costume design, highlighting his two-color mask and two different colored sleeves. Clayton Crain’s variant cover is nice, but too generic for my tastes, though it’s good to see that it actually uses the Rebirth design, unlike several of the variants which use a version of his old suit.