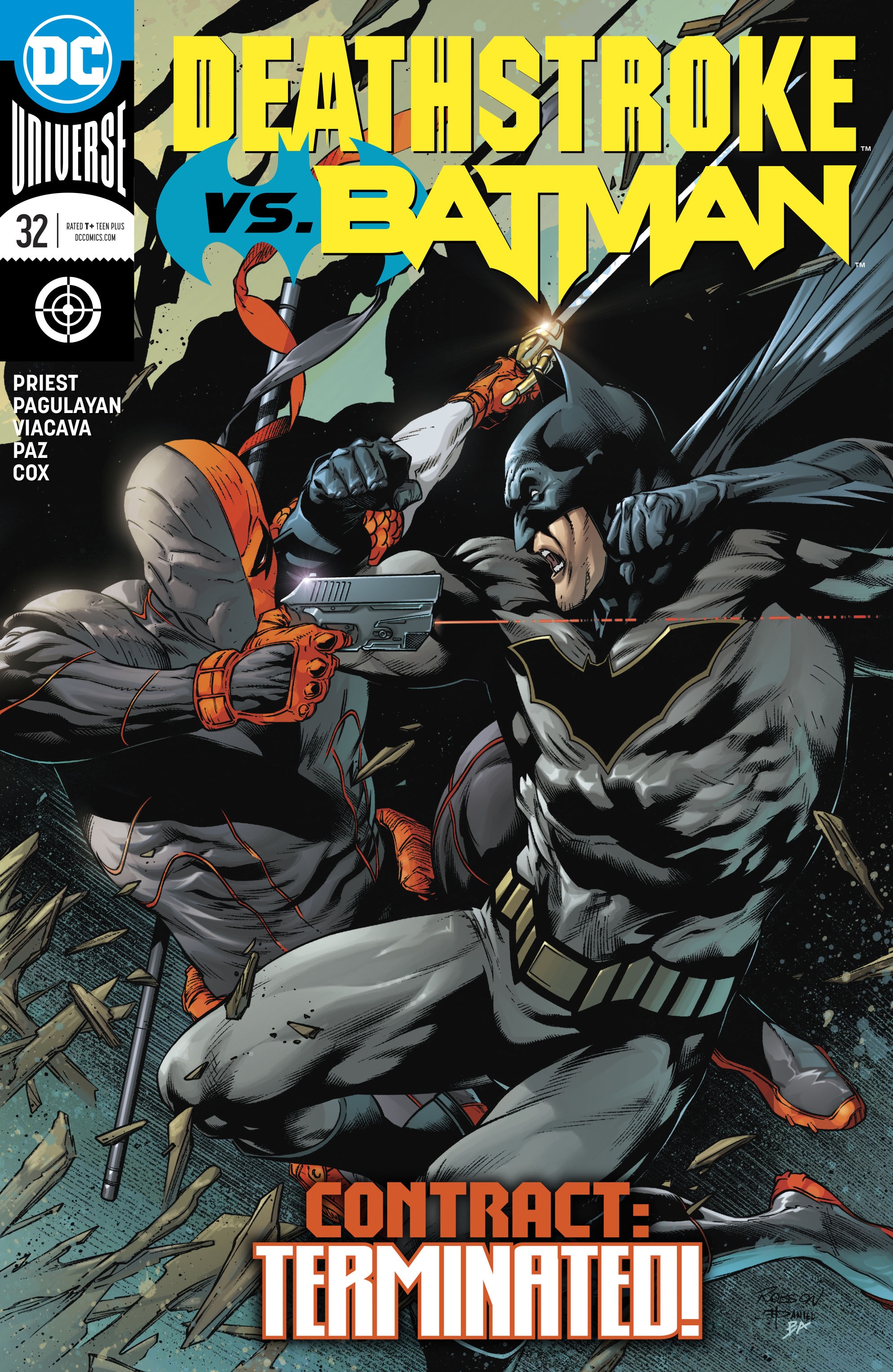 Overview: Deathstroke and Batman clash in Spain as their plots become increasingly tangled.

Synopsis (spoilers ahead): In flashback, Robin talks about his frustration that his uniform made him a target, but he wanted to wear it, and the unknown viewer took it away.

Joseph, also in flashback, tells us that his father was crazy and never acted like his family was his home.

In the present day, in Madrid, Batman has his gauntlets around Slade’s neck, and his point-defense AI system tells him that Batman will kill him in a few minutes as they both chase an elderly superhero, while Deathstroke drives a hovercar. The superhero, Ace Masterson, AKA The Human Dynamo, collects and then uses electromagnetic radiation, giving him flight and enormous abilities, including turning the bullets Deathstroke fires back on him. As the hovercar crashes, Slade warns Batman that if he continues holding his throat, he may be accidentally “effective,” killing the assassin.

Yesterday, Slade receives a call from Batman while he was in Kuwait with Talia al Ghul, informing him that the targets he had accepted contracts to kill were in protective custody. Slade protests that the evidence that Slade, not Batman, is Robin’s father, is faked, and he’s attempting to use Talia to find out who planted it. Batman hangs up, and Slade, irritated, initiates his Wayne.exe plan through a tech who owes him a favor.

Slade and Talia have breakfast, with Talia claiming that Damian is Slade’s son, not Batman’s. Slade counters that he knows of at least seven Bruce Waynes, all appearing simultaneously, and that whether Bruce Wayne is Batman or not, Batman is the real identity, not the mask.

En route to Spain with Adeline Kane, Batman asks what she wants from him (because of her theft of his phone prototype last issue), and she responds that she needs his help with Deathstroke, and feels guilty for creating him and marrying him. Bruce remembers his own early days with Damian, wondering if he missed the signs of sociopathy that Adeline missed in Slade.

In Barcelona, Alfred attempts to check into a hotel, while on the phone with Wintergreen. They speculate on Adeline’s attempts to turn Batman, and Alfred reaffirms his commitment to protecting their masters (and metaphorical sons) from themselves. However, Alfred’s call and his check-in are interrupted by his credit card being declined, and the local police arriving to speak with him.

Back to the present in Madrid, Deathstroke tells Batman to stop getting in his way or suffer lethal consequences, taunting him that he’ll have to break the no-kill rule to win, but doing so would destroy Batman. Batman retorts that his whole purpose in life is to make the world a good enough place that Batman is unnecessary, by containing and restraining evil men. Slade scoffs, seeing himself as a necessary evil, and pointing out the hypocrisy in Batman’s recruiting children to follow in his footsteps. Slade’s target, the Human Dynamo, intervenes, revealing that he hired Slade to kill him, because his powers will not let him die, though he is aging and losing control of his mental faculties, putting the public at risk of superpowers without control. He tells them his history, that his old team, the Justice Experience, was slaughtered on their first mission half a century ago, and he gained his powers in an experiment to save his life. He hired Deathstroke so he could die in one last fight of good versus evil. Batman attempts to teleport himself and the Dynamo to the Sanctuary to put him in stasis until a cure can be found, but the Dynamo’s superpowers short out the Justice League’s teleporter, and Deathstroke shoots the old hero through the head, saying he resents being called evil.

In Gotham, we see the results of Wayne.exe as Commissioner Gordon receives notification that all of Bruce Wayne’s assets are frozen as he is under investigation as a foreign agent.

Robin’s flashback continues, revealed as a recording made recently by a former Robin. As he takes off his mask, he says that Damian Wayne’s DNA tests don’t match Batman’s and that he knows who his real dad is. The last page reveals Damian, holding his phone playing the recording from the former Robin, looking most perturbed at the news.

Analysis: We reach the halfway point of this six-issue arc with a tense revelation of a new player in the deadly game between Deathstroke and Batman – Damian Wayne, the supposed person whose paternity has led to the contention. Furthermore, the interviews with Robin which have acted as a sort of Greek dramatic chorus turns out to have been a new recording with a former Robin, not an interview in the past. Debates have been running since the first issue two months ago about the identity of this Robin – many claimed it was Dick Grayson, but others thought the harsh attitude displayed indicated Jason Todd. However, the frank jealousy displayed toward the current Robin in this issue indicates at the third Robin, Tim Drake, may be the culprit. Furthermore, Damian’s reveal along with the title of the next issue – the Good Son – indicates that Priest will be exploring his reaction to the possibility that Slade, not Bruce, is his father. Additionally, as Priest has often referred to Joseph (Jericho) as Slade’s “Good Son,” there’s a high likelihood that we’ll see a certain white-clad speech-challenged superhero in the next issue as well, to provide even further contrast.

Though many readers are tuning in to discover the answer to this question (which this reviewer believes is clearly that Bruce is Damian’s father and is entirely unconcerned with), the other major tension driving this story forward is the parallel between Batman and Deathstroke. Both of them have rigid rules and standards, but one has chosen the life of saving others, the other the path of destruction. Having Batman and Deathstroke articulate their perspectives while in combat, as well as showing the effect their missions have had on their children, deepens the sense that Priest isn’t holding Batman up as the Light and Slade as the Dark. Instead, he shows Slade arguing that like the Operative from Serenity, the brokenness of the world demands inhumane men who kill the most dangerous threats, while Batman believes that his own harsh but still non-lethal methods can one day make the world safe for him to stop. The fact that he continues to train children to carry on his mission puts an element of contradiction in his stated goals, as does his inability to express his love for those children in a healthy or understandable way.

Carlo Pagulayan provides the art for the present day scenes of conflict between Batman and Deathstroke in Madrid. His fine linework continues to provide a great richness of detail – the second-page splash is incredibly rich and textured but draws the eye perfectly through the action. The flashback sequences are drawn by Roberto Viacara, whose work is a good match for Pagulayan’s (similar to Diogenes Neves, who pencilled the majority of the Defiance arc prior to this one), but without Pagulayan’s fine control over proportions, leading to some awkward looking figures, such as Damian in the flashback where Batman wonders if he missed Slade’s heritage in the boy he loves. On the whole, though, this book remains one of the best-looking books on the stands, and we can hope the editors are on top of the artistic scheduling so that Pagulayan can provide full interiors. Jeromy Cox provides rich but not overly vivid coloring, as befits a book that takes place smack dab in the middle of the superhero world, but does poke at it with Deathstroke’s sword. The effect of Robin taking off his mask while the colors go from sepia-tones to bold red, yellow, green, and blue is startling, enhancing Priest’s reveal that the interview isn’t a record, but a weapon.

Final Thoughts: The tension in this crossover event increases as the conflict between Deathstroke and Batman draws more and more members of their families into its arc.