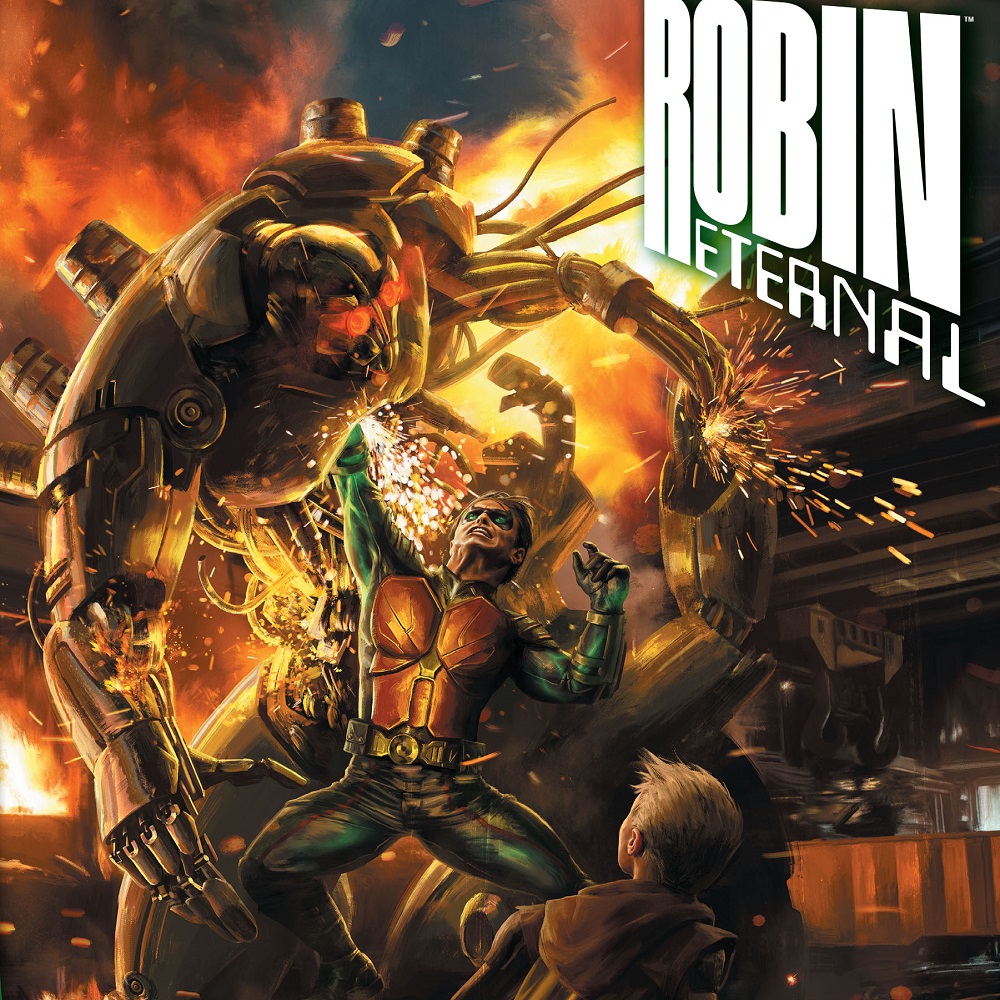 Overview: Robin, Spoiler, and Darcy battle the vicious Peacekeeper-13 and the deadly chemical effects of Lazarus Resin in the finale of Future State: Robin Eternal.

Synopsis (spoilers ahead): Tim, dripping with Lazarus Resin, rises from the dead, remembering the last issue’s events. Empowered by the glowing green fluid, he punches the Cyber who killed him in the head, knocking it clean off. Stephanie Brown and Darcy watch in disbelief at Tim’s resurrection, and as Tim fights thirty Magistrate foot soldiers, Steph and Darcy hack into the ship’s computer to find out the previous tests of Resin on living (instead of cybernetic) subjects.

As she researches, Darcy notices that Peacekeeper-13 has arrived on the ship, and Tim’s thought processes start to devolve, shown as his narration boxes change from a red color to black. He hallucinates Two-Face, his past with Steph, and his brother Robins, all telling him he failed. Darcy discovers that all previous experiments with Resin and humans ended in death. They all resolve to destroy the Resin by crashing the ship into the Gotham River, dissolving and neutralizing the chemicals. Tim rips open the door to the command room, where Peacekeeper-13 and several more elite soldiers wait. Tim defeats the soldiers, but Steph has to stop him before he kills the last one. She succeeds, but at the cost of being captured herself, carted off to her fate (in Batgirls #1, found in Future State: The Next Batman #2). Peacekeeper-13 takes Darcy hostage, and Tim’s hallucinations return, but he manages to beat back the fearsome foe, saving Darcy, and they pilot the train into the river. Tim grabs Darcy, jumps out the window, and uses the last of his Resin-induced strength to hurl her to safety on a nearby skyscraper, then plummets into the river himself. Darcy mourns, and turns away, but we see Tim’s glove break the water!

Analysis: Writer Megan Fitzmartin and artist Eddy Barrows close out their two issue series about Tim Drake with a satisfying bang. Fitzmartin shines here – her voice for Tim last issue was pitch perfect, and her use of hallucinations to show Tim’s history and struggles is a dramatic step up in demonstrating her knowledge of and grasp of the character. Unlike the Batgirls backup for The Next Batman series, Fitzmartin cleanly and organically refers to many points of reference for Tim and Steph throughout the issue, and Eddy Barrows references both the issues he drew (Detective Comics #940) and those he didn’t with beautiful accuracy. The story structure, though challenging given Tim’s intensely warped perspective from the Lazarus Resin, builds to a powerful climax, and a nicely handled final panel giving an emotional finish to the story. Throughout, Fitzmartin plays with just a few ideas – the Lazarus Resin, the Cybers, Peacekeeper-13, and her trio of heroes – Tim first, of course, but Steph and Darcy as well – and we leave this intense adventure with a hope that these three will meet again someday, and have more wonderful adventures like this one.

Eddy Barrows provides the art for this second issue as he did the first and does so with the same polish and skill seen before. There are some awkward compositions, like a zoom in on Peacekeeper-13 without panel transition, making it appear like there are two of the same figure in the panel, but on the whole, Barrows keeps the narrative flowing with great energy and skill. As Fitzmartin clearly references James Tynion’s Detective Comics run, it’s really nice seeing Barrows, who was the primary artist for that run, get a chance to follow it up with this story.

The main cover, again a collaboration between Emanuela Lupacchino and Irvin Rodriguez, is beautifully painterly, showing Tim and Steph fighting one of the enormous Cybers, with Tim ripping the Cyber apart as Steph looks on in stunned horror. The detail and coloring alone make it a beautiful piece to add to your collection. The variant cover by Daniel Warren Johnson and Mike Spicer shows a powerful image of Tim kicking through the head of a Cyber. The blur of Tim’s boot, the shattered head expanding in its wake, and the thick, blocking shapes making up the detailed action pose give it an entirely different look from the graceful waves and tiny brushstrokes of Rodriguez, giving readers a real choice between two really strong covers for this issue.

The two-issue Robin Eternal miniseries concludes with a powerful punch, examining the character and history of Tim Drake with great intensity and giving Stephanie Brown and new character Darcy great supporting roles (as well as fitting in nicely with other stories in Future State).