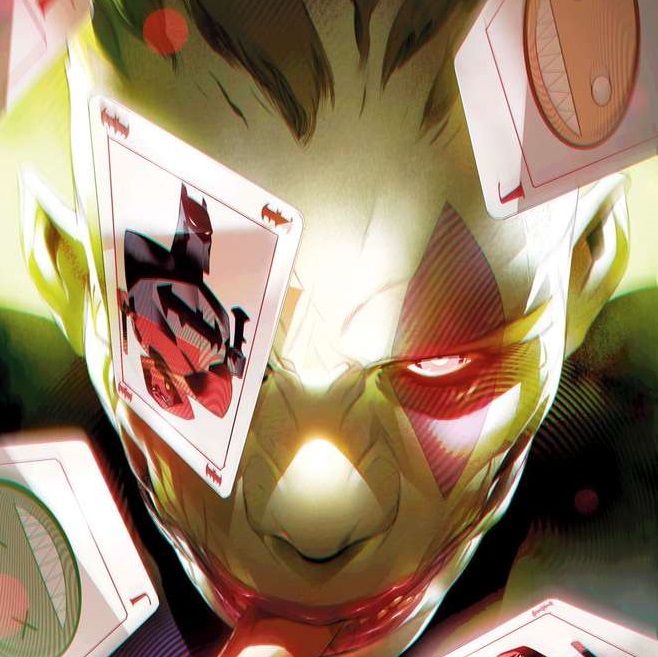 Overview: The second arc concludes in Future State: Gotham #12 with a mech versus clown battle and Dick Grayson’s moment of drugged clarity.

Synopsis (spoilers ahead): As Future State: Gotham #12 begins, Nightwing recovers from his massive drug trip in Talia’s facility, muttering about bats and jokers. Meanwhile, Red Hood and the Next Batman face the Next Joker in their new transforming mech suits, as Hunter Panic and Harley Quinn try to get Tobias Whale to safety. As Jace and Jason tag-team the gloating clown, Harley apparently leads her followers into a trap for Hush. Jason triggers an EMP, which knocks out the Next Joker’s suit, leading him to collapse. Harley knocks out Hunter Panic, and Hush continues to hold a secret Harley hides from Ivy to obtain her services via blackmail. Hush proceeds to shoot Whale dead, taking over crime in Gotham.

As the news reports on the chaos in Gotham following Next Joker’s capture, Jason visits Hunter Panic, trying to figure out what to do now that they know Hush was behind everything starting with the Bat-crater – but they also find out that the real Joker has captured the Next Joker while the clown was being transported.

Talia enters Nightwing’s room. He reveals that he knows where Damian AND Bruce are, and he has a plan to save the world and stop the Magistrate by becoming a Bat.

Analysis: Dennis Culver and Giannis Milonogiannis bring the second arc of this manga-esque dystopian Bat-family story to a close with a big brawl and a nearly complete defeat for our protagonists Jason and Jace. While such a note of failure does fit with a dystopia for sure, it’s frustrating to have our main characters spin their wheels to accomplish worse than nothing after twelve issues. The failure of the creative team to take advantage of the full scope of the Future State Gotham world also continues to be intensely frustrating. While Jason and Jace Fox already  had a large amount of focus given them in the original Future State event, the rest of the Bat-family has only been seen in cameos, despite promises from the original co-writer of the series, Joshua Williamson, that the entire Bat-family would feature. Perhaps he merely meant the cameos we got in the first arc, but if so, it’s quite a letdown to those of us who were intrigued by the ideas introduced in Batgirls, Arkham Knights, Outsiders, Dark Detective, the Grifter and Huntress story, Robin Eternal, Catwoman, and more.

Jason and Jace also have very, very little to give to the story in terms of motivation or relationship, mostly acting as action figures to bang up against the action figures of equally ill-defined villains such as the new Joker or the victorious Hush. Milonogiannis does a decent job with the action, but the writing doesn’t reveal character in that action, leaving much of this comic feeling extremely hollow. The hints of interest and progression come from the short Dick Grayson and Talia al Ghul opening and closing of the book, in which the most interesting ideas in the series so far – the return of Bruce and Damian – begin to take shape. One can only hope that this plotline, and not the Jason and Jace one, will take center stage for the next arc, and expand the cast to take better advantage of the potential of this setting and aesthetic.

Jamal Campbell’s gorgeous, heartwarming, and inspiring Nightwing story surveying Dick Grayons’s life and impact on the DC Universe, “The Man Who Flies”, from the latest Batman: Black and White series, rounds out this issue, providing a special treat for the arc finale.

Simone di Meo gives this series perhaps the most chilling look at the Next Joker on the main cover, with Batman and Red Hood cards flying towards the viewer, in typically dynamic di Meo fashion. Mike Bowden draws the cardstock variant, with the Next Batman swinging through the shiny Future State Gotham, full of bold lines and a neon blue background, the nicely designed Future State trade dress in the corner. Both covers are pretty pleasing aesthetically, providing a nice (if perhaps difficult) choice for buyers.

An ending of failure for our protagonists, with promises of a better future, but after a full year of the title, Future State: Gotham needs to kick up the character development, cast, and world exploration into much higher gear.