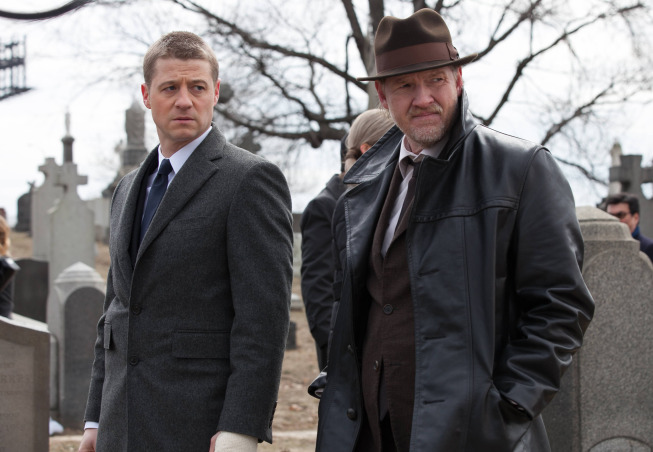 Our first look at FOX’s Gotham features Selina Kyle (Camren Bicondova) running along the rooftops of Gotham City. She drops down into Chinatown, where she begins to cause trouble. Whipping out a knife, she smoothly slices open a grocery bag, and while helping to pick up the fallen groceries, she steals a bottle of milk. After getting away with this, she has a close call. A man notices that she has stolen his wallet off of him. He chases her, but she escapes up the fire escape of a building. She then runs off to an alley where she gives the stolen milk to an alley cat. Hearing laughter, she quickly hides and then witnesses the most iconic scene from the Batman origin story, the murder of Thomas (Grayson McCouch) and Martha (Brette Taylor) Wayne.

Called in to investigate the Wayne murders are Detectives Harvey Bullock (Donal Logue) and James Gordon (Ben McKenzie). The latter is new on the job and is quickly forced to learn about the crookedness and corruption of Gotham City. After their investigation stalls, they go to Fish Mooney (Jada Pinkett Smith), a club owner who works for crime boss Carmine Falcone (John Doman), but is looking to take over organized crime in Gotham. The following day, Bullock hears from Mooney about a lead. They follow up the lead at the home of Mario Pepper (Daniel Stewart Sherman), father of Ivy Pepper (Clare Foley). A chase ensues, following the revelation that they intend to search the Pepper home. The chase ends with a fight and Bullock shooting Pepper. The detectives are lauded as heroes, but Oswald Cobblepot (Robin Lord Taylor) tells Detectives Renee Montoya (Victoria Cartagena) and Crispus Allen (Andrew Stewart-Jones) of GCPD’s Major Crimes Unit that Pepper was framed.

Visually, this show is unique. The coloring and scenery stand out as having both a modern and old-school feel to it. Furthermore, the run-down depiction of the city makes the show look depressingly real, but the view of the city’s skyline displays a fake and unreal feel to the city. These paradoxical elements blend together and give the show a feeling of both brutally realistic and tragically over the top. While these elements may seem to clash, they work together to give the show the feel it needs. In this show, Gordon comes face to face with the brutal reality of Gotham City and the impossibility of how corrupt it is.

There are several choices made by the writers with regards to character development that raise a few eyebrows. Firstly, Captain Sarah Essen (Zabryna Guevara) is depicted as older than Jim Gordon. If the show stays true to the comics, specifically Batman: Year One, Gordon will cheat on his current fiancee, Barbara Kean (Erin Richards) with Essen. The age difference between the two makes this an unlikely event. Next, Alfred Pennyworth (Sean Pertwee) is portrayed as tough as nails. While leaving the scene of the murder, Alfred tells the young Bruce Wayne (David Mazouz) to keep his head up and to “stop crying.” Later, upon discovering Bruce on a ledge at Wayne Manor, he begins berating him, rather than panicking that he might be trying to hurt himself. This depiction differs from the usual kind-hearted and nurturing Alfred audiences are used to seeing. Meanwhile, a new side of the Penguin is seen. When audiences are first introduced to Penguin, Oswald Cobblepot is either already on top of the crime world of Gotham City or uses his wealth to get there. In this incarnation of the Gotham underworld, a new Penguin is seen, one who is clawing his way to the top. Lastly, there are characters thrown into the story that are not ordinarily connected to the Thomas and Martha Wayne murders, Ivy Pepper and Edward Nygma (Cory Michael Smith). It remains to be seen what justification the writers offer for including the future-Poison Ivy and future-Riddler. None of these character development choices are inherently mistakes, but they will need to be justified along the way.

The visual aspect of the show and the writing combine with the acting of the cast for further boldness. The choices made by the cast make for a unique look at the citizens of Gotham. Ben McKenzie’s portrayal of Jim Gordon shows the young detective as optimistic, yet hardened. Donal Logue presents the first ever live-action depiction of Harvey Bullock, and he fully embraces the anti-hero persona of the seasoned veteran of GCPD. Robin Lord Taylor also takes a unique spin to the role of Oswald Cobblepot. The Penguin character is always one who is seen as a true crime boss, but Taylor is able to take that character and turn him into an errand boy for a mob lieutenant who shows flashes of what is to come for this future-member of Batman’s Rogues Gallery. Jada Pinkett Smith also impresses. Her Fish Mooney can only be described as chilling. Overall the writers, actors, and production team of Gotham have produced a solid opening episode that promises at the very least intrigue and offers the potential for greatness.