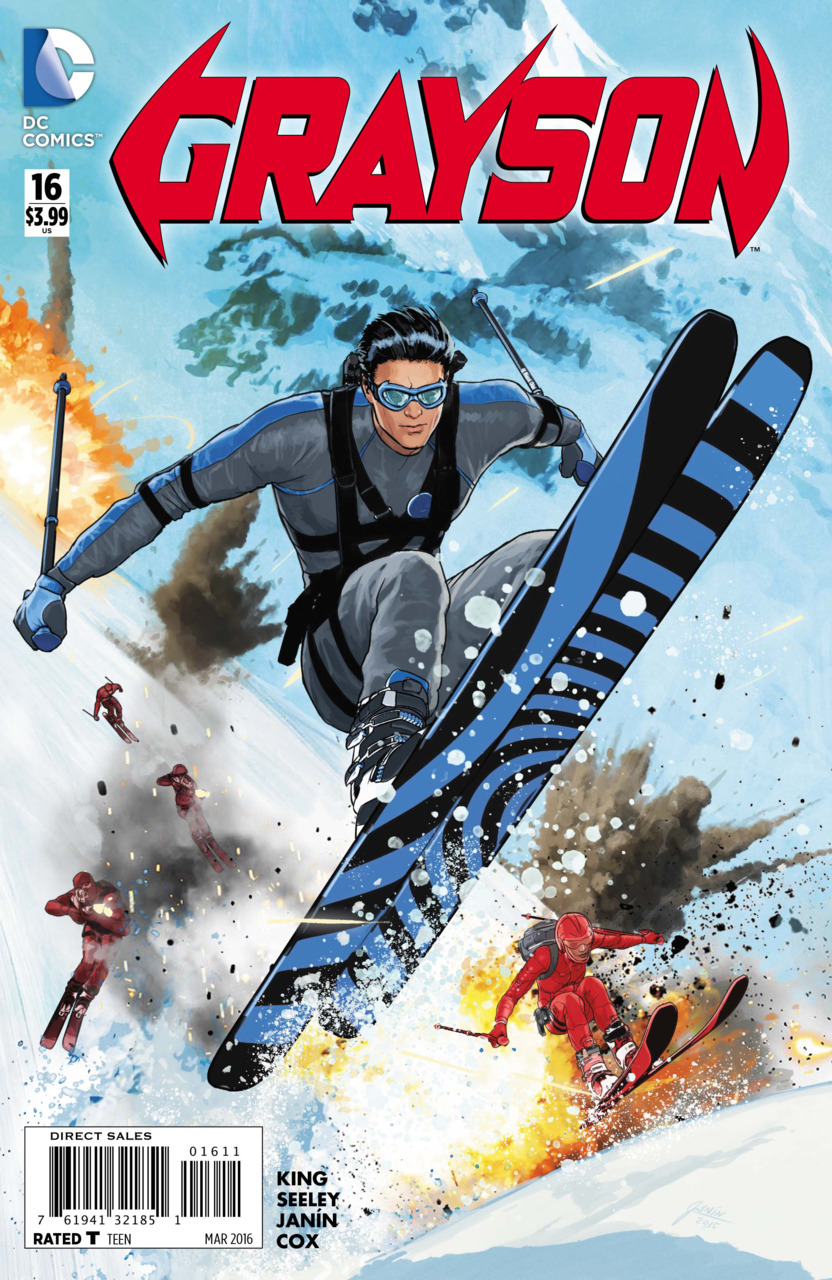 Breakdown: Tom King and Tim Seeley deliver a script that is the most fun I’ve had reading a comic in a while. It’s pretty clear these guys had fun writing this issue. And that’s not to say this is all fluff, because it progresses the story of Dick taking down Spyral while having fun doing it. If you were looking for more of a follow up to Robin War, I could see where this may be a bit of a let-down, but I’m sure we will continue to see more of that storyline down the road, so I won’t hold it against the group.

Mikel Janin is still awesome. His attention to detail is impressive. His ability to capture facial features that are unique to a specific character, and then to capture it from different angles and be as consistent as he is, blows my mind. He’s so good at it, that the team even play on that to trick us, as the reader. Janin’s ability to be this good, and to not miss an issue is something most artist only dream of doing.

I feel like Jeromy Cox did better of diversifying his color scheme better than he did last issue. He still has his same color palate (and I would like to see him switch it up a bit), but with the constant changing of scenes in this comic, we get a good variety of what Cox can do, and he takes the opportunity to flex his muscles.

Carlos M. Mangual killed it, this issue. And King gets a lot of credit here, too. Because both of these guys shined during a scene where there is a song. They worked together to break up the lyrics in a way that allows the song to play in your head. This issue made me wish these guys were doing Black Canary, but that’s for another review.

Recommendation: If you like fun, love what Grayson has been doing, or are curious to jump on — just do it. This comic is awesome. If you don’t like this comic, you must hate yourself, and need to find a new hobby.

Synopsis: We open in France, as a secret agent is driving a fancy European sports car, dragging a man from behind. The agent gets out, and has tortured the password to a night club out of the man. He places the man in the trunk of the car, and gives the keys to the vallet, and goes inside.

I think Ninel opens the door for him (the big Russian guy from issue #1), but I don’t know if these guys are being cleaver, or if that’s just a reused face Janin keeps using. The agent goes to the bar, and asks the bartender to surprise him. Dick Grayson then kicks him in the face, and tells him to let Helena know that he’s taking Spyral down.

Dick runs outside, and gets in the sports car, which Tiger is driving. We jump to five days later, in the same car – in Italy – agents 1 and 37 are being chased by a group of agents in between on skis, with guns. But they take care of them. The duo escape to Greece, but blow up the boat they traveled on without looking back. The moment is so awesome, that Dick believes that this calls for a theme song — to which I say, YES.

While Dick sings, we see the two taking down over twenty different Spyral agents across the globe. Back at Spyral, Helena agrees to team up with Checkmate to stop Tiger and Dick. Checkmate being made up of; Frankenstein, Keshi, Tao, Bronze Tiger, Grifter, King Faraday, and Gwisin.

Dick and Tiger make their way to Portugal, and decide they need backup in case Spyral starts to give them serious trouble. Dick says he knows a guy, making his way to Checkmate HQ, to make a deal with Maxwell Lord.

Closing Thoughts: I wonder if Dick or Helena are being played by Checkmate, or if this agency is just as divided as Spyral. Also, that Checkmate team looks awesome, and I want a book of that.