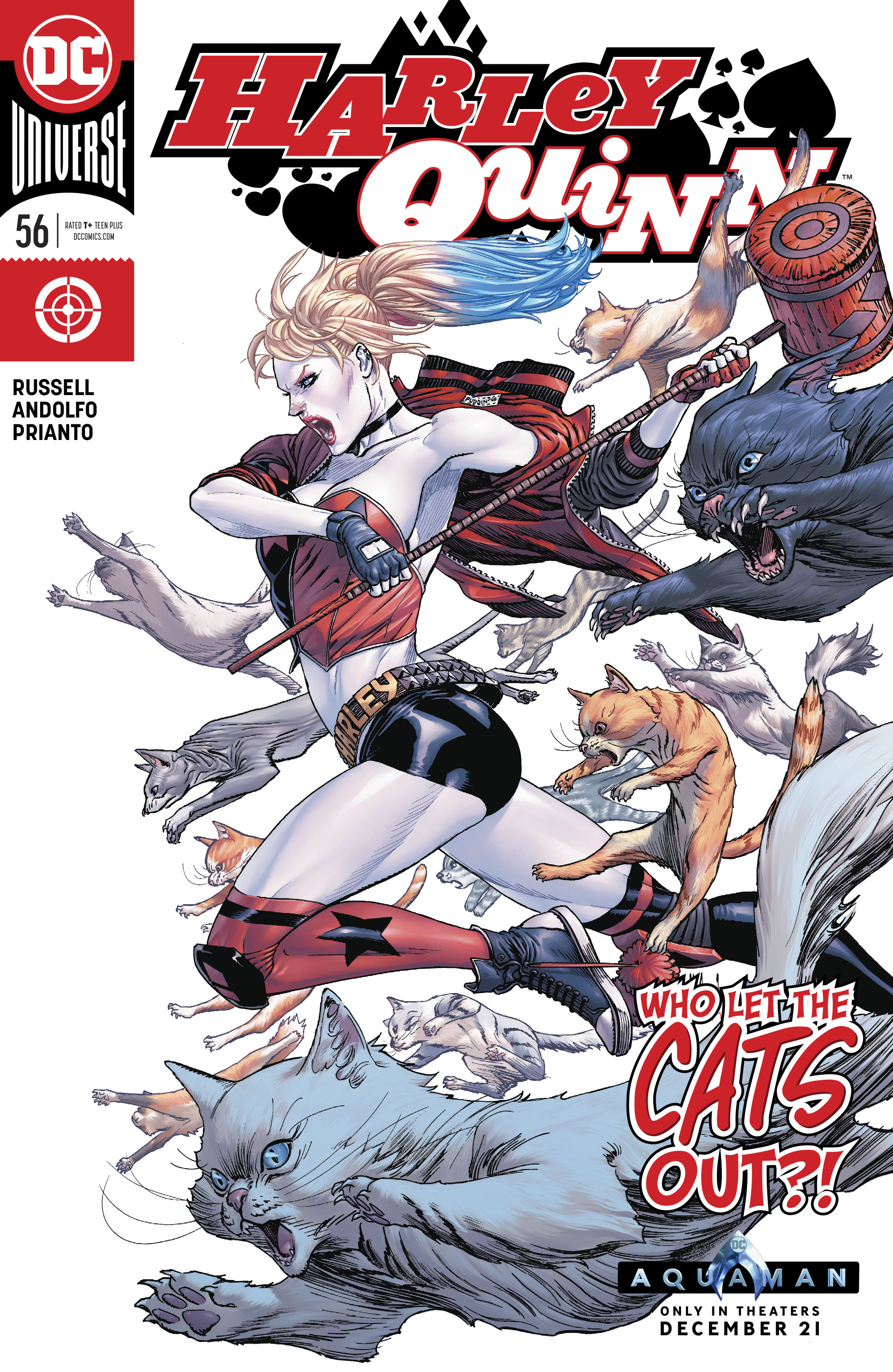 Overview: Harley’s friend has to give away his burglar-cats,  and Harley helps him out, despite the misogynistic attentions of a group of chauvinistic male pet shop owners!

Synopsis (spoilers ahead): Harley is suffering from allergies, and the reason is that her friend, Monsieur Katz, has an entire house of burglar-cats that he has spent his life training to be the perfect thieves – but he can’t have thirty-one cats in his one-room apartment in New York City, and Harley, having a soft spot for both animals and Monsieur Katz, agrees to help him place the cats. “The time has come to go into the world, my children”, intones Monsieur Katz.

Harley then tours around Coney Island, giving away the cats to various friends and acquaintances. In doing so, however, she attracts the attention of two-would be muggers, who turn tail after she beats them up – but Harley is informed they are rival pet-dealers, who somewhat surprisingly don’t like women selling cats! As Harley says, “That’s like the stupidest thing I’ve ever heard!” Me too, Harley.

The male pet store owners in the region apparently think it’s about “preserving tradition,” and their struggling old business model is failing in the modern age. Harle, of course,e takes an aggressive approach to these people, and actively seeks them out, as she advertises Monsieur Katz’s cats for sale! She quickly attracts a group, but as they threaten her Harley quickly uncovers them and exposes their identities – even without taking off their masks! (Thank you internet research!)

They scamper away but her victory is short-lived as a group of angry male pet-store owners literally come with burning torches, chanting catchphrases! Harley and Eggy (who is helping take care of and give away the cats) take refuge in the apartment building, but the group is remarkably aggressive as they seek to attack the building! The cats themselves ally with Catwoman who helps dispatch the last protester, as effectively the crowd has filtered away due to boredom and low attention spans!

Analysis: This is a fairly interesting issue of Harley Quinn, more so for the obvious critique of Comicsgate which has been devouring the internet over the last year or so at least, than for the actual content. The pet-owners are clearly stand-ins for a certain demographic of comic reader/buyer/YouTuber, and Harley represents a certain brand of writers or fanbase that these people think are being overly catered to. It’s such an obvious analogy that it’s almost a shame it’s explored in such a cartoony way as there is probably a more interesting and challenging read possible on this topic than what we are presented with here. As a reader and reviewer, I was somewhat impressed that DC even went so far as to openly critique this whole movement, even if solely done as a parody. I thought it was well-handled, light-hearted, and quite funny. Not being in the least bit concerned with the absolutism connected with Comicsgate the finer details escape me and credit has to be given to the author for dressing up such a contentious issue inside a fairly entertaining issue of Harley Quinn.

With all that said, let’s look at the art as this was definitely a change of pace on the title. Mirka Adolfo supplies a more cartoony style that blended well with the storm and charm of Harley. I found myself wanting to see more from this artist in this milieu. It’s a nice change of pace on this title and I felt gave some much-needed personality to Harley.

I would have anticipated Catwoman to have a greater role in this issue and her appearance did feel a little “tacked on.” That said, it was a nice touch to include her and have Harley offer a cat at the end. I still feel the absence of Poison Ivy is being felt on this title and was one of the strongest emotional beats of the previous Conner-Palmiotti run and replacing her with Catwoman is not the straight swap some creators seem to think it is.

All in all, this is a nice side issue of Harley Quinn, which is a little heavy-handed in it’s messaging, but then again, Harley isn’t famous for her subtlety. I found the well-intentioned clowning around this somewhat delicate issue quite entertaining. In a lot of ways, this is superior to recent Sam Humphries issues of Harley simply by virtue of being a little different to the common beat.

Final Thoughts: An interesting but non-essential issue to the Harley canon. A fun diversion with a cool message.