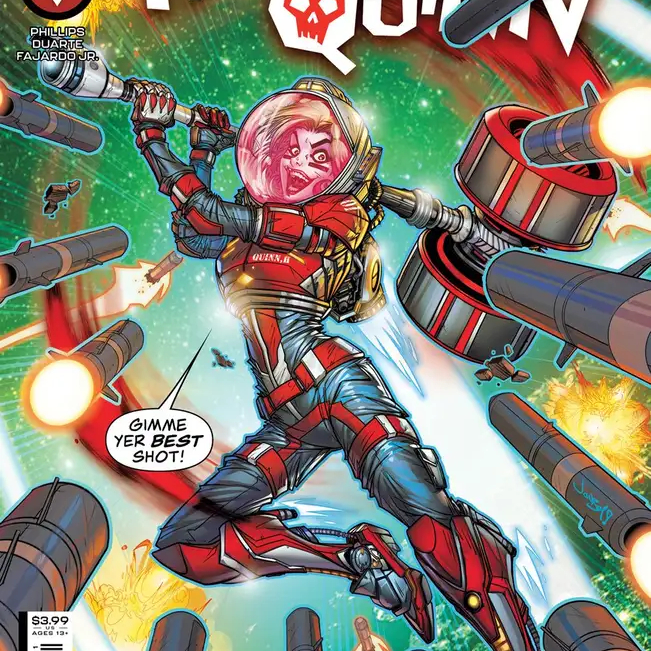 Overview: In Harley Quinn #19, if this spaceship’s a-rockin’, don’t come a-knockin’.  Or Harley will take care of you!

Synopsis (spoilers ahead): As Harley Quinn #19 begins, a military supervisor is trailed by an assistant carrying a steaming coffee. The former is lecturing the latter as they enter the operational headquarters.  Officers begin reporting, but an alarm blares. An unknown projectile appears on Mr. Radar.  The supervisor orders missiles to launch.

Inside the shuttle, Task Force XX bickers with each other and with Luke.  Dreadbolt indicates that he can teleport outside the ship but not with his life support. He does so and detonates the missile before it hits the ship. His body thumps up against the window. The team pauses to honor the dead and then discusses their options with Luke. Lashina claims the pilot role.

At a secluded mansion, Luke and Lucius Fox argue. They discuss Jace, and Lucius ends up accusing Luke of hubris, naming him an emperor with no clothes.

Back at the moon, Lashina accomplishes a rough landing. Solomon Grundy vomits on Bronze Tiger. Verdict spews on herself. Harley is first out the door, and the team re-assembles to search for Element X. They arrive at the abandoned Justice League watchtower and are unable to enter until Solomon Grundy bashes the doors down.  They search the base and banter.  Suddenly, some extremely juvenile, xenomorph-looking creature drops down and with long tendrils attacks Lashina. Harley still manages to crack a joke as the assault unfolds.

Analysis: I mean, you might love this story. But it’s beyond outlandish, even by Harley standards, and the moon as a setting is not my preferred context for the character. That said, writer Stephanie Phillips’ Harley is always engaging and downright funny. Especially as part of a larger team, her charisma, intelligence, and willingness to laugh at herself shines through. This Harley is genuinely difficult to dislike.

I am happy to see Solomon Grundy back in continuity. The relationship between the sentient zombie and Harley is one of the sweetest surprises of the book (last seen back in Harley Quinn #12). Harley’s openness and appreciation for Grundy is of course an allegory for not merely tolerating interbeing difference, but celebrating it as a foundation for a relationship.

Finally, I increasingly appreciate artist Georges Duarte’s pencils, with the sharp lines and large, active eyes really driving the dynamism and movement that is virtually a Harley Quinn trademark. Both the lines and the watercolor hues remind me a bit of Laura Braga’s turn on the book, and it is a nice break from the cartoonish aesthetic favored by Riley Rossmo.

I may not be enjoying the space adventure as much as other Harley fans, but there is still something to enjoy seeing Harley in a situation we haven't seen in a while.