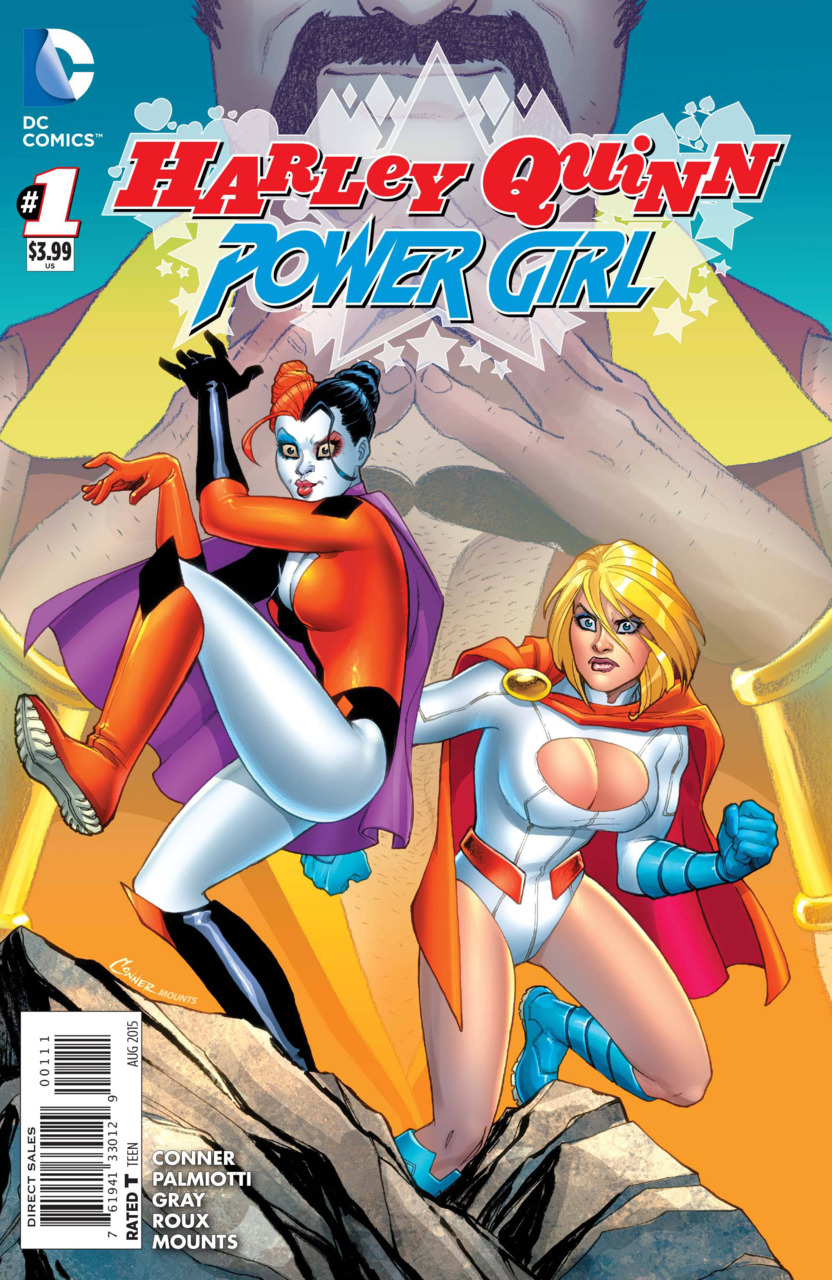 The first installment of the team up between Harley Quinn and Power Girl begins with a quick recap of the pair’s previous collaboration in Harley Quinn #11-13. HQ and Pee Gee are on Valeron where Power Girl has lost her memory. They are rummaging around the moon looking for a way back to Earth when they run into an amorous party loving Hobbit type creature called Sleezox with a fierce multi headed dragon as a pet. Upon rejecting Sleezox’s advances they are forced to fight the hydra. Power Girl gets swallowed but punches her way out of the creature. Harley gets into Sleezox’s weaponry and emerges with an extreme number of guns and missiles which she launches into the beast, killing him.

The firepower reveals a giant robot head that is the Love Nest for android copies of Power Girl. The two get into the head which is a love nest space ship owned by Lord Vartox. They take off to find him.

Harley and Pee Gee travel in the flying robot head which is hit by artillery and crashes. They are accused of being prostitutes when Harley vaporizes the local magistrate with a tiny but effective laser gun. Because of Harley’s violent outburst Power Girl is attacked but defeats some heavily armed locals. Angry at Harley, Power Girl destroys Harley’s laser gun.

After vanquishing the bad guys our heroes run into Groovicus Mellow, chief science officer to Lord Vartox who says that the amnesiac Power Girl, or at least her android copy, is Vartox’s mate. Groovicus tells them that Vartox has a teleportation ring that could help the two get back to earth. They decide to go to to the Moon of Lustox to save Vartox when they are attacked by a large number of Odeon’s space ships. To be continued….

When I first heard of this series I wasn’t sure what tone it was going to take. If you are a Harley fan you will be pleased, it is a zany tale full of gags and subtle references (Game of Thrones, Lord of the Rings, True Detective and more) with a sexy 70’s vibe. Harley is portrayed as an irresponsible menace that somehow saves the day almost by mistake. Power Girl has to find a way to manage Harley while she battles the bad guys with comical results.

This team up works well because of the differences in personalities of the two heroines. It is the interplay between them that really works. You can feel Power Girl’s frustration having to clean up the oversexed Harley’s messes, but on the other hand Harley’s insane outbursts often result in their survival. Harley has a different relationship with Power Girl than she does with Poison Ivy. PG isn’t afraid to get angry and exasperated with Harley’s escapades but she has a wicked streak of her own. It is this interplay of personalities that Harley’s own book is still developing with the Harley Gang.

The story itself is well told although following Harley and PG’s progress through the various planets and moons is a little confusing. While this can be frustrating in some comics, I am just going along for the ride here.  The art is well done, the characters are always easy to distinguish and the various personalities really shine through. Power Girl is, as usual, dressed in her ridiculous chest exposing body suit. Harley is dressed similarly but for some reason she struck me as more modestly clad than usual. I appreciate Harley’s relatively conservative attire because I think that she is done best when her sexiness comes from her character not her exposure.

One minor quibble is that some of the lettering is very small which makes it hard to read. I thought this might be a problem in the digital version of the book only but I picked up the paper comic and its not any better. The small lettering is done for effect but to my aging eyes it is a little hard to read.

As a Harley fan I am looking forward to reading the rest of this series, full of smart dialogue and irreverent situations. I am hoping that Harley’s main book can find a relationship as effective as this one between Harley and Power Girl. It really ties the room together.