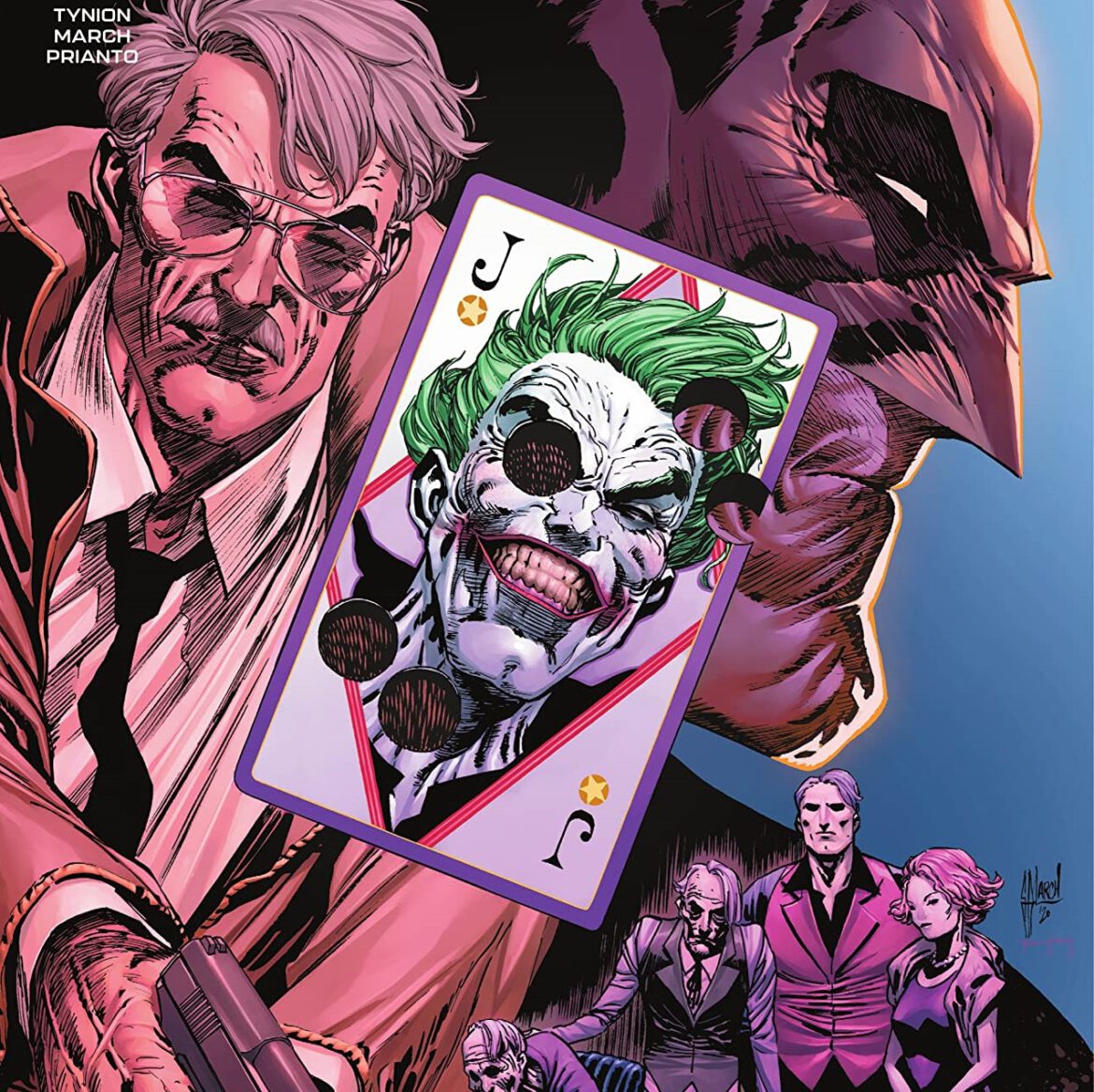 Overview: In The Joker #2, Jim Gordon takes steps to prepare for his hunt for the Joker down in Belize. Meanwhile, other players, including a successor to Bane, prepare to hunt for Joker as well.

Synopsis: The Joker #2 starts as Jim Gordon monologues about how much a life costs, recalling the move to Gotham, his children’s education, and the pull of fighting the urge to give in and accept bribes to pay for it all, we see the woman who hired him to kill the Joker, Cressida, head to a meeting. In Santa Prisca, another woman is in a tank, undergoing treatments while men in Bane masks watch onward. As Gordon continues, other people throughout Gotham, violent people, receive invites to a meeting.

Batman finally arrives outside of Gordon’s apartment, having been summoned by a smaller, more discrete signal. Inside Gordon’s apartment, Jim lays out all of his cards for Batman. He tells Batman about Joker’s last whereabouts and about Cressida and her giant bodyguard. Jim tells Batman that he wants to pursue this, though he leaves out the part about killing Joker. Gordon ends by asking Batman for his resources.

Batman confesses that he’d want to pursue this lead himself, but Gotham is in a state of paralyzing fear right now, meaning he can’t. It eases Batman’s mind that Jim is on this case. Batman agrees to look into Cressida for Jim, as well as give him access to the Batcomputer and a way to contact the vigilante if needed. In return, Batman asks Gordon to contact him instead of taking on the Joker alone. Find Joker, then make a call. He also tells Gordon that he’s providing a chaperone for the mission, Oracle.

Oracle jumps into the conversation and notes that Gordon agreed to everything, except letting Batman bring Joker back home alive. She points out that Gordon merely said, “That makes sense to me” and didn’t officially accept that requirement.

Jim mulls this over for a moment, then plays a card he’s hidden up his sleeve for years. “Are you sure you’re not just worried about your old man… Barbara?” Jim asks, throwing Batman off his scent.

There’s a moment of silence before Oracle tells Jim that she wants him to visit her at the Clocktower. He agrees.

Down in Belize, the owner of a private getaway makes his way toward where Joker is lying low. Through a recalled memory in Gordon’s narration, we learn that these private getaways are a part of something called “The Network,” which is a series of hideaways around the globe where many of the big-time villains go to unwind and recoup. At this particular getaway, Joker is about to get the boot from its owner, Desmond, after killing a high-profile neighbor.

Joker tells Desmond that some other high-profile people are already on their way after the assault on Arkham. He tells Desmond to provide about twenty men, and he can wipe out the search party, and then Joker will be on his way.

Outside the Clocktower, Barbara meets Jim. The two talk about how long he’s known, and during the conversation, Barbara asks about the threat Gordon made in holding Batgirl responsible (in Batgirl #50) for James Jr.’s death. Jim tells his daughter that he was angry and wrapped up in what the Joker did to them – again. As they talk, Jim reveals to Barbara that he’s considering killing the Joker, as Cressida has asked of him. He promises Barbara that he won’t go through with it unless he can convince her that it’s the right thing to do, though.

Barbara gives Jim a special satellite phone that taps into Batman’s network, as well as access to Batman’s files. Among the files are names and information on everyone who died during the Arkham attack (see Infinite Frontier #0). Barbara believes Cressida had ties to Arkham, as well as others who will no doubt be looking to kill the Joker.

In Texas, some of the people who were summoned to a meeting join together to discuss capturing and killing the Joker. In Santa Prisca, the woman from the tank is now imbued and enhanced with Venom. She dons a Bane mask. In Gotham City, Cressida puts on a Court of Owls mask and rejoins the other Owls.

Analysis: The Joker #2 picks up where The Joker #1 left off. Though Gordon has made up his mind to pursue the Joker, he’s still considering the offer to kill the Clown Prince of Crime once and for all, promising his daughter Barbara that he will only do it if he can convince her that it’s the right decision to make.

Much of this issue is devoted to setup. We see, clearly, what resources Jim does and does not have at his disposal. We learn the rules of his outings abroad. We also see the other major players involved in this quest. There’s a successor to Bane, a woman who is rumored to be his daughter (possibly named Vengeance). Jim’s backer, Cressida, is part of the Court of Owls. There’s also a group of wealthy elites from Texas who lost a loved one in the Arkham attack as well.

Throughout The Joker #2, writer James Tynion IV maintains that consistent private eye feel as Jim Gordon narrates on nearly every page, filling readers in with backstory about his life and his concerns, as well as ancillary details that help set boundaries to this world beyond Gotham. It’s smart, and we learn about the idea of the Network, which is a hold-over from the Nazi era that supplies temporary respite and housing to the world’s most notorious criminals. A hideaway in Belize that’s part of the Network is currently providing temporary relief to Joker.

Peppered throughout this issue-long setup are some serious bombs. In order to avoid telling Batman that he’s considering the idea of killing the Joker, Jim reveals that he has known, for quite some time, that Barbara was Batgirl and is Oracle. He also has a touching moment with his daughter before heading off on his mission. The two come to an agreement regarding how Jim will proceed. It’s a bittersweet reunion, one that recalls better years but bears the weight of damage that Joker has wrought upon the Gordon family.

Guillem March, who provided stellar art to this and the previous issue, uses this complicated tone to layer in the demon that is haunting both Barbara and Jim. There’s a scene where Jim takes off his glasses, and as he’s holding them in his hands, March inserts a reflection of the Joker. It’s eerie, and it helps evoke this image of a specter, or in last issue’s case – a boogeyman – that’s ever chipping away at Jim’s psyche. It’s a not-so-subtle inclusion that ties into the perspective that’s been consistent throughout this issue. From start to finish, this is a story about Jim Gordon. He narrates almost every page, despite not being in it. It’s a great tactic, and it makes for a consistently moody tone throughout, one that never strays from feeling personal and focused on stopping evil at all costs.

Synopsis: The backup of The Joker #2 starts in Blackgate Penitentiary, as the Queen of Spades nurses a wound and tells her gang of convicts to bring the Ace of Spades back into play via a parole violation.

Elsewhere, Harper Row is en route to Snyder College to track down leads from an Alexis Kaye (Punchline) Tik Tok (called Tik Tak in the issue) challenge wherein users are recalling tales of her college years. Harper tracks down a friend of Alexis’ by the name of Aiden Priest. After some back-and-forth, Aiden agrees to show Harper everything he knows about Punchline.

Back at Blackgate, the Ace of Spades arrives to take down Punchline, and it’s none other than Orca.

Analysis:  This is a continuation of the Punchline backup story that appeared in The Joker #1. We get a bit more momentum on the story, but these small vignettes, especially when they’re alternating between two different subplots, aren’t allowed enough space to really tell a story or get a reader excited for said story.

This whole backup boils down to a little more than what we learned in the last one. Harper Row is tracking down information for Leslie Thompkins in order to help the District Attorney’s case against Punchline. Meanwhile, the Queen of Spades wants revenge on Punchline for attacking her last issue. That’s it, and it amounts to little more than a footnote of happenings in greater Gotham. It’s a tease, I suppose, but it’s one that doesn’t really move on the needle on anything. Ultimately, what’s the point? This backup might as well have not been included at all in The Joker #2.

The Joker #2 takes the concept of what this story is from last issue and defines the rules of the game, dropping a bombshell or two along the way. The art is great. The tone is consistently moody, and this story is setting itself up to be quite the amazing international game of cat and mouse.