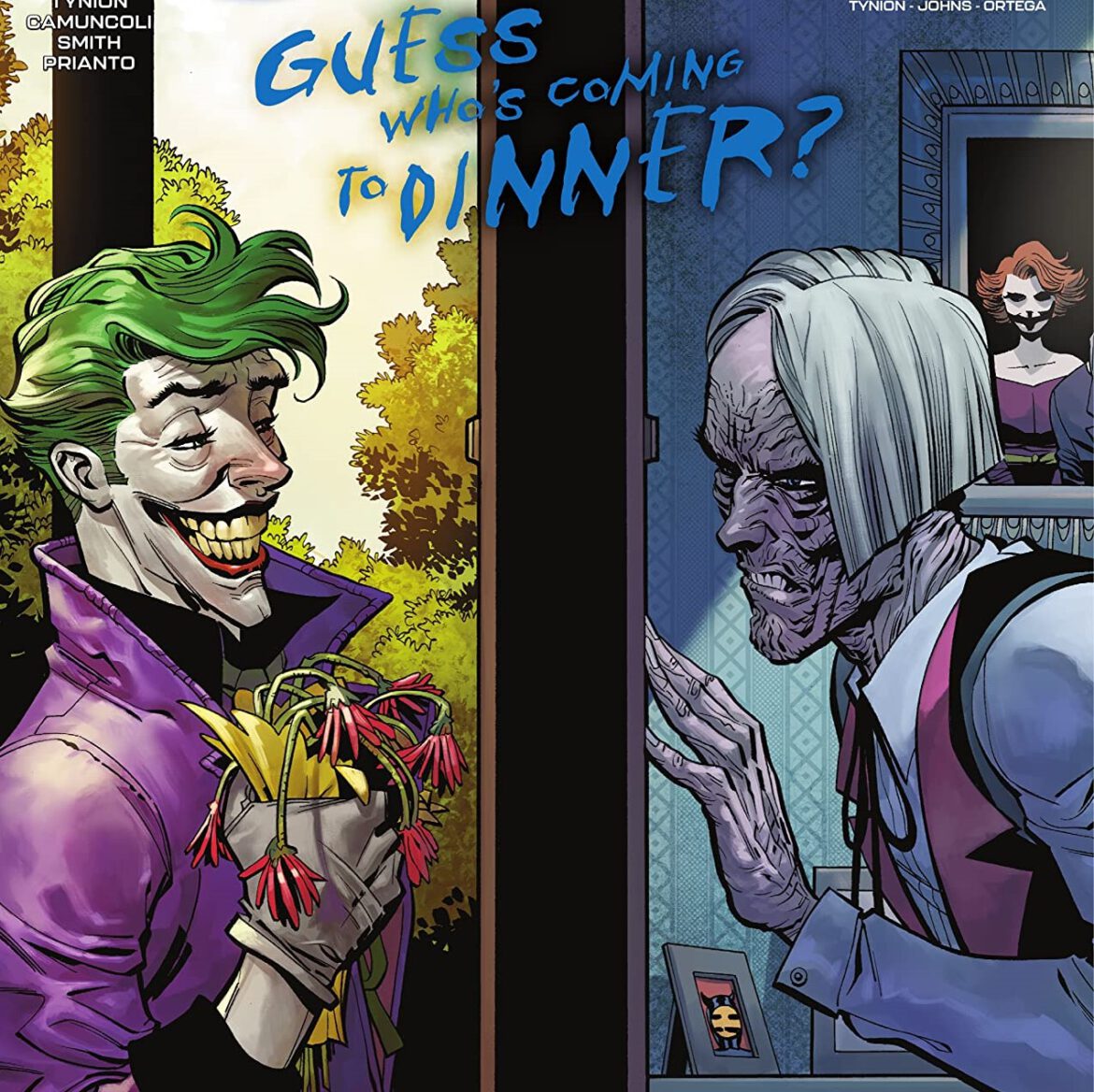 Overview: In The Joker #11, Jim reawakens in Gotham City. Before his wounds can heal, he gets back on his feet and heads to Texas where Joker and the Sampson clan will make their final confrontation.

Synopsis: The Joker #11 begins years ago, as a motorcade from the Network drives up to the Sampson homestead in Hooper County, Texas. A representative introduces himself to Mr. Sampson and Billy. This representative tells the Sampsons that the Network has been reading about their exploits in the newspapers. In exchange for access to the Network and a way to turn their newfound oil into an empire, the representative tells Mr. Sampson that he will need to sacrifice a family member in order to quell the allegations from a young woman about their cannibalistic ways. The agent tells Mr. Sampson that there’s an asylum in Gotham, and this “sacrificial lamb” can live out the rest of his days there in peace. Mr. Sampson agrees.

Today, Mr. Sampson looks at a picture of his brother, Billy, and reminisces. An assistant informs him that the Joker is in their possession and en route. Mr. Sampson orders word to be sent to all the family members that clown meat will be on the menu.

Jim Gordon awakens in Gotham City. After almost dying in The Joker #9, he has been rescued and is under the care of Barbara Gordon. When he tries to get up, Barbara tells Jim that he’s strictly on bed rest for now.

The two argue, with Jim telling her that he needs to get to Texas in time to intercept both the Joker and Vengeance (Bane’s “daughter”). Barbara tells her father that she has it handled. She’s keeping Batman out of the loop because the Gordon family has been targeted. Instead, Barbara will go to Texas in Jim’s place, and Julia Pennyworth will be tailing Barbara in order to keep her safe.

Jim knows that Barbara is not telling him something. Barbara doesn’t divulge what happened while he was away, but she lets him know that Batgirl (Cassandra Cain) is surveilling the apartment. Barbara will know if Jim tries to leave.

Barbara meets with Cressida, Jim’s benefactor, and hitches a private flight to Texas. Meanwhile, Jim tries to piece the clues together. He can’t figure out where Joker fits into all of this, but he understands someone wanted to bring the Sampson family out into the light, as well as disrupt the new line of designer villains that the Network was finalizing. Jim calls Harvey Bullock, who is currently chasing a lead in the Appalachians.

Jim tells Harvey to get to the nearest private airport. Then, presuming that Batgirl wouldn’t risk hurting him when he’s still recovering, Jim walks out of Barbara’s apartment. Using the credit card from Cressida, he gets body armor sewn into his clothes, high-tech surveillance equipment, and a private flight to pick up Harvey. From there, the two will travel to Texas.

At the Sampson homestead, a bound Joker is presented to Mr. Sampson.

Analysis: After a couple of flashback issues, The Joker #11 puts readers back on track with the main storyline. Jim has been saved by Barbara Gordon, who takes it upon herself to replace him in this investigation for Cressida. The deus ex machina used between The Joker #9 and this issue is a little disappointing, especially since readers had to wait a couple of months to see how that issue’s cliffhanger was going to be resolved.

If readers can look past the disappointing off-panel resolution of Jim being saved by Barbara’s hidden agent, The Joker #11 falls back in line with where the series was prior to two months of flashback issues. Despite being injured, Jim picks himself back up, makes a few choice purchases, and gets back on the hunt. What elevates this issue is Jim’s internal narration. He admits to not being able to see two or three moves ahead, despite his best efforts. He knows where to look for clues and follow a lead, but he can’t solve a puzzle from a distance. This confession echoes Jim’s inability to see how his best efforts harmed Gotham City in the most recent flashback issues, as well as proved key to the dissolution of hismarriage, and serves to keep Gordon as an interesting and flawed protagonist.

The rest of the issue serves to pad out how the Sampson family wound up within the Network, though readers aren’t provided with information as to why such a shadowy organization would want to associate with a wealthy family of cannibals. That’s the one missing piece of information that derails the Sampsons involvement in this storyline. Why them? Why was their oil essential to the Network?

The other buffer that keeps Billy Sampson and company from being interesting is the fact that, at their core, this family is really just a reference to the classic Tobe Hooper horror film, Texas Chainsaw Massacre. As more details emerge about the family, the tether between the iconic horror film and these new Batman villains is further entangled, and it’s more of an annoyance than it is fun.

Giuseppe Camuncoli provides art for this issue. While Camuncoli’s penciling feels way different from main series artist Guillem March, there’s a horror element to his style that makes this issue feel right at home. Camuncoli brings a gruesome quality to some of the more horrific depictions of Joker and the Sampson family that complement the macabre that Jim Gordon has been descending into throughout the series. Often in this issue, the art elevates disjointed storytelling.

Synopsis: As the backup in The Joker #11 begins, Punchline gets a call to Blackgate Penitentiary. She promises to deliver on her end, so long as her trial goes according to plan. On the other end of the phone is Bluff, who reaffirms that the trial will end as expected.

Once off the call, Bluff argues with his parents about the game he’s been playing. His parents believe he should focus on the Royal Flush Family first, but Bluff is too focused on expanding the gang. He notes that the Queen of Spades tarnished their name, but now she’s been replaced. When the King and Queen of Diamonds express their doubts, Bluff reaffirms that everything will work as planned.

Cullen Row leaves the Royal Flush Family’s hideout in anger, and Bluff chases after him. Cullen is upset that it appears that Bluff is just enriching his family rather than helping the unfortunate. Bluff tells Cullen that that isn’t the case. Rather, Bluff is trying to get out from under the thumb of his parents. He begs Cullen to help him get the only innocent person in all of this out of jail. The innocent person, according to Bluff, is Punchline.

Meanwhile, Kelly Ness, Leslie Thompkins, and Harper Row argue with the prosecutors about a lack of evidence to convict Punchline. Frustrated, Harper asks to leave and freshen up in the bathroom. As she’s washing her hands, an assistant to the prosecution team enters. The assistant, at first, appears to attempt to calm Harper. It’s soon revealed that the assistant has been passing information to Punchline’s team.

Analysis: As Punchline’s trial nears, new players are introduced as having a hand in this case. Bluff, heir to the Royal Flush Gang, has been coordinating with Punchline for reasons unknown. His parents don’t like it, but he has his own long game. Meanwhile, there’s a plant within the prosecution team that has been feeding information to Punchline’s people, which is why every lead Harper followed up until this point (save for Kelly Ness) wound up either destroyed or dead.

At this point, there’s nothing new that can be said for this backup story after The Joker #11. Personally, it feels overly convoluted and pointless, especially now that James Tynion will no longer be writing Batman comics. With Tynion gone, Punchline will most likely disappear into the ether, making this rudderless and exhausting exercise even more aimless.

After a two-month break from the main storyline, The Joker #11 dismisses the cliffhanger featured in The Joker #9 with a bit of off-panel deus ex machina. While disappointing, Jim Gordon’s wonderful characterization makes up for this misstep.