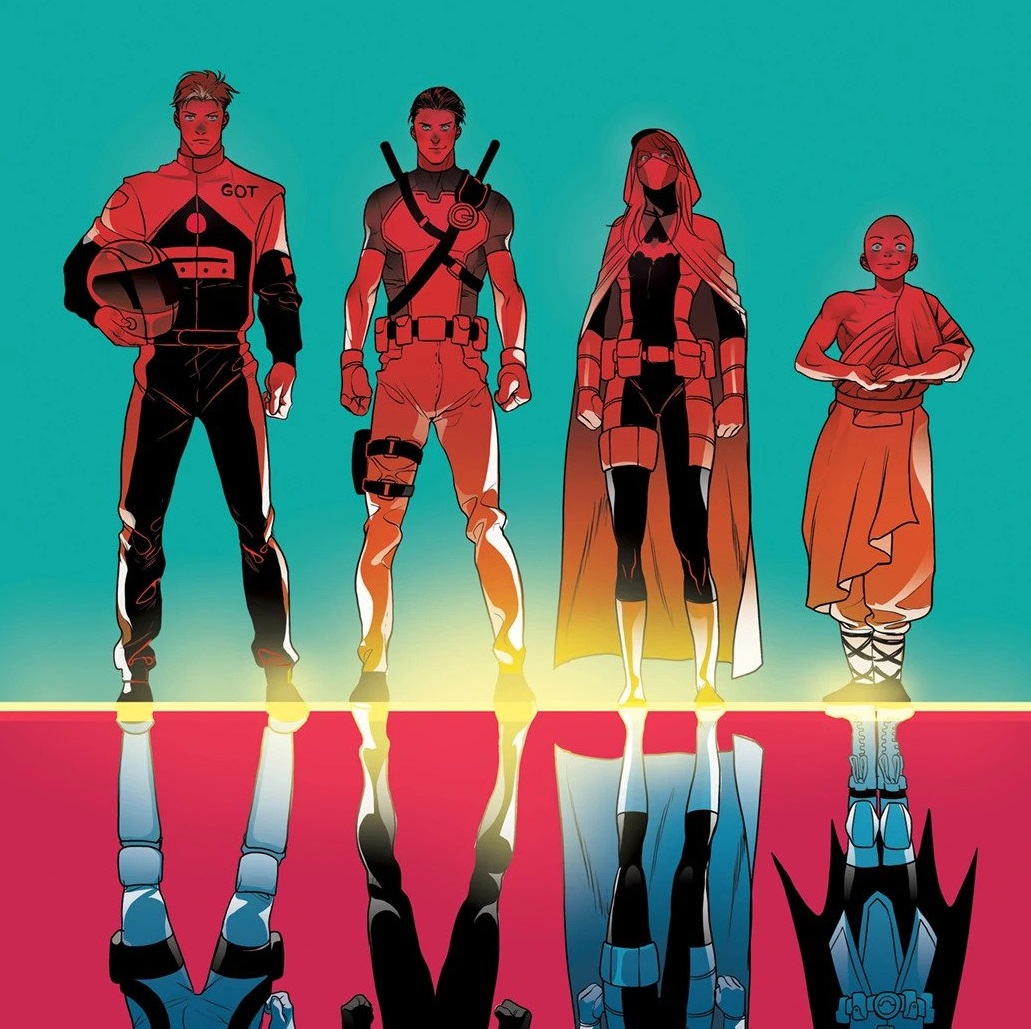 Overview: In Robins #5, the Robins explore a simulation of their alternative lives, and Batman chases his own past demons around the globe.

Synopsis (spoilers ahead): Robins #5 begins in a famous Thai Buddhist temple, Damian Wayne, Brother al Ghul, sweeps the floor peacefully, even accepting another monk’s chiding that he missed a spot. In San Francisco, Stephanie Brown as Spoiler leads the Teen Titans (including Jaime Reyes Blue Beetle, Jackson Hyde Aqualad, and Supergirl) in pursuit of a HIVE villain. In Gotham, Jason Todd, wearing a red helmet, wins a car race for charity to support his drug recovery clinic. And in Markovia, Dick Grayson, Agent 37, works with Helena Bertinelli to take down dangerous American nationalists, but he sees a huge Robin “R” symbol appear in front of him. Though Helena tells him he’s hallucinating, he walks away, following the symbols. He is attacked by one of Dodge’s creations, a hard-light holographic Grue, and defeats its outdated technology after suffering some damage. He uses nano-bats to try to wipe away Dodge’s technology, part of Batman’s attempts to wipe away the past.

Meanwhile, in the REAL Gotham City, Batman crawls through the air ducts of a skyscraper to discover the plans of Cormac Dodge, the Escape Artist.

Meanwhile, in the virtual reality constructed by Dodge, Damian is attacked by Steph, Jason, and Dick, and they all remember that they are in a simulation – one designed around Batman’s projected futures for them if they had never been Robin. Jason believes that Bruce thinks the Robins would have been happy without his interference, but Dick says something else is going on. Another Robin R appears, and Dick says that these symbols led him to the other Robins, and encourages the rest to follow them so that they can all find Tim Drake.

Bruce travels to London, where his Batcomputer located Cormac Dodge’s face in surveillance, which is also where he finds the tree bombed by Jenny Wren in the first issue. Batman sees the picture of AJ, presumably Dodge’s daughter, and heads back to Gotham, to the mental health hospital in the corrections building.

The four Robins wake up together in the simulation, covered in sweat from the tragic outcomes they found – Steph distrusting adults and thus leading the Titans to fight Superman, losing their trust – Damian failed to reach enlightenment and rejoined the League of Assassins after hurting his fellow monk brothers – Jason becoming increasingly desperate to get money for the clinic and turning to crime, landing in jail – and Dick lost himself in the lies of being a spy, destroying his mind and heart. Dick thinks the lesson is that Batman couldn’t catch them because they weren’t Robins, but Jason realizes that the real tragedy of them not being Robins is they weren’t able to catch each other. The simulation unlocks the “prize” of seeing the hinted-at Gauntlet Zero.

Meanwhile, Jenny Wren uses her hard-light technology to disguise the captured Tim Drake as the Escape Artist, as she knows Batman is coming for her.

Analysis: Almost at the finish line for this often controversial, often enjoyable miniseries! And in Robins #5, writer Tim Seeley’s inventiveness makes me wish that the Round Robin contest on DCUniverse had been a bit more expansive (and no doubt expensive) – the winning series getting a twelve-issue maxiseries, the second-place series getting a six-issue mini, the third-place getting a one-shot, and fourth place getting a backup story – something, at least, meaning we get a bit more from more of the exciting pitches that we got in the context (and one of the other pitches that got a lot of buzz, Justice League Queer, got a short story in the Pride anthology later last year, so there is precedent for those pitches getting used in other places at DC).

The alternate histories we see here could each be at least their own issue or possibly miniseries. The adventures of Dick Grayson, Agent 37, Super Spy, partner to Matron (Helena Bertinelli), and saver of the world has already been proved in the Grayson ongoing series (that Seeley was one of the original creators of). Jason Todd, race car driver, perhaps not the most organic of ideas from stealing hubcaps to racing cars for charity, but still a compelling idea with potential for a lot of stories. Stephanie Brown, the Spoiler, leader of the Teen Titans, sounds truly awesome (but of course, I would say that, being biased), and Damian trying to tame his rage as a Buddhist monk would be a fascinating play of contrasting impulses. Some have questioned the paths each Robin took to get to their alternate history, and I think that a bit more showing how each alternate history failed would have been more powerful and where I see the most compression of the concept in the miniseries format. However, despite these drawbacks, Robins #5 is perhaps one of the most compelling yet, for all the imaginative energy it calls forth through its concepts. I do hope that Tim Drake, absent from a lot of the series due to his kidnapping and replacement by Jenny Wren, will get some heroic moments, in the end, to prove his own worth as a Robin alongside his four fellow Robins.

Baldemar Rivas continues to provide great energy in his penciling, though as with many energetic artists, it can sometimes come at the cost of tight, controlled linework. Overall, the package has gotten more and more polished as Rivas and Seeley have brought their tale to a climax, and Romulo Fajardo Jr. really makes the colors of this book pop, as any book about the Robins should!

The main cover is one of Rivas’s most striking – the alternate versions of Jason, Dick, Steph, and Damian stand over the red-eyed virtual reality ensnared “normal” version reflections. Khary Randolph provides our workout variant, this time highlighting our youngest Robin, Damian, with a very dynamic looking cover, though given Damian’s age, thankfully not nearly as risque as the thirst-trap covers the older four Robins got.

Tim Seeley and Baldemar Rivas continue to enthusiastically pack in connection to history and to their own story as well as energetic extrapolations in this penultimate issue of Robins, hurtling our young heroes on a tense collision course with both the villain Jenny Wren and Batman himself.