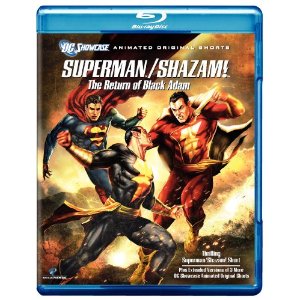 DC Showcase presents Superman/Shazam! Wait, isn't DC Showcase a comic? Well it was, and now it is a series for animated shorts from the DC Universe. The idea behind these shorts is to give a sort of overview of a lesser-known character in the DC Universe. It gives characters that would otherwise not get individual screen time a chance to shine. The first short that was released was The Spectre on the blu-ray and two-disc version of Justice League: Crisis on Two Earths. Jonah Hex was released on Batman: Under the Red Hood. And the latest one, Green Arrow, was released on Superman/Batman: Apocalypse.

So with the individual shorts being released only as special features on multiple discs, how was Warner Bros. going to get these shorts into the mainstream? Superman/Shazam: The Return of Black Adam is the answer. This new release gives us an extended short and collects all of the previous shorts in one.

The Superman/Shazam short is almost double in run time than the previous shorts. Sitting at twenty-two minutes, the short almost feels as if it could be an episode of an animated series. Now saying that, was it more than what we have seen of Shazam's appearances in the past animated series? Yes and no. While the story follows the circumstances that finds Billy Batson becoming Captain Marvel, there are some additions that we would not have seen if this was not rated PG-13. There was a little more violence than we have seen in past Shazam stories and even the inclusion of a prostitute. The story follows Billy Batson as he is telling reporter Clark Kent his story. Kent has promised to tell Batson's story to the world to raise awareness of homeless children. Black Adam appears from a long overdue banishment, and wants to make sure that the person that the wizard will bestow the power of Shazam to is killed. Of course this person is none other than Billy Batson. Fight scenes ensue prompting the appearance of Superman.

The voice talent for the release was spot on. George Newbern who voiced Superman in Justice League. The legendary James Garner voiced the wizard Shazam. Jerry O'Connell voiced Captain Marvel. Arnold Vosloo voices Black Adam. No complaints about not going all out for the voice cast. Warner Bros. has gone to great lengths to get great voices for all of the shorts and this is no exception.

As for the special features, there are commentaries for all of the shorts. There are also four DC Animated Universe episodes from various shows featuring the characters from the individual shorts.

Overall, this was a great release. The story was good and it is nice to have all of the shorts collected in one set.

Superman/Shazam: The Return of Black Adam: