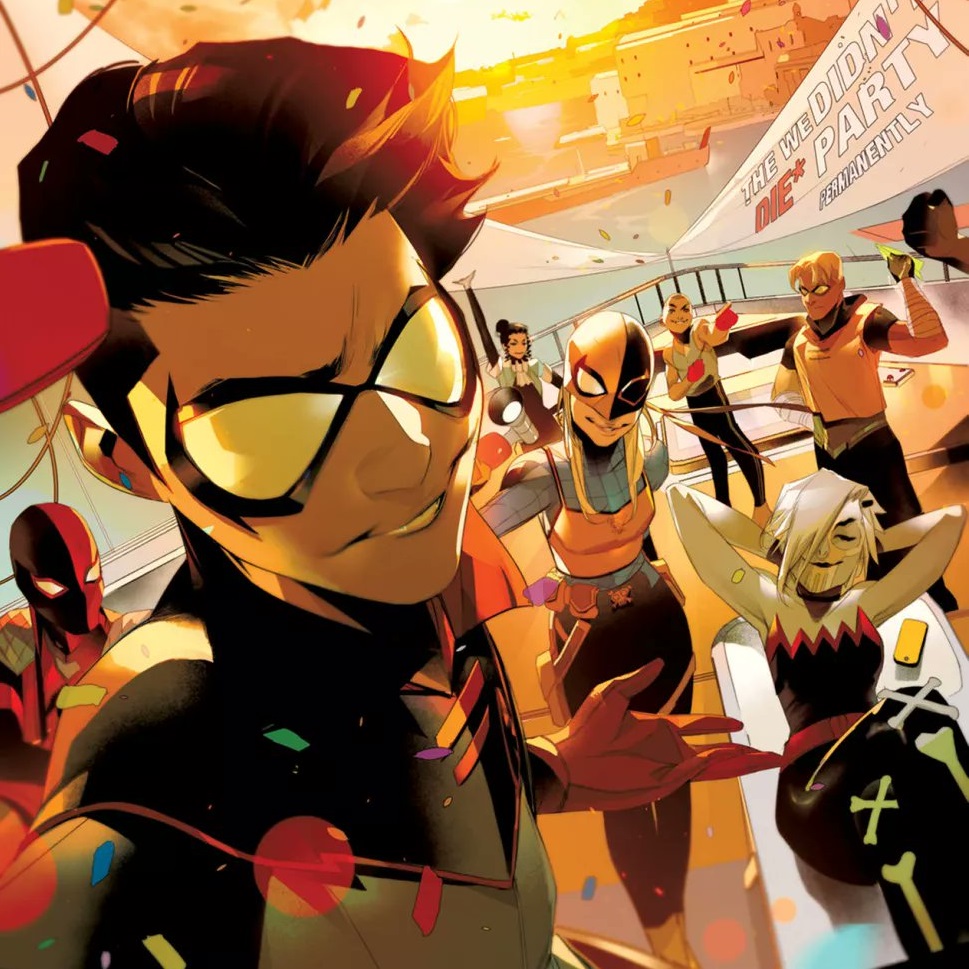 Overview: In Robin #11, the League of Lazarus storyline comes to a finale, and Damian Wayne is set to return home. More than anything, Damian wants to see Alfred and not his father.

Synopsis (spoilers ahead): Robin #11 begins as Damian Wayne wakes up to a family civil war. Ra’s al Ghul and Talia al Ghul are invading the island and are attacking Mother Soul. Talia approaches Damian while Ra’s engages his mother. Damian stands in the way of the fight by inserting himself between Ra’s and Mother Soul. Damian wants answers from both of them. Ra’s stops his attack and has his men take Mother Soul into custody. Talia, the leader of the League of Shadows, orders them to join the League of Assassins and the League of Lazarus.

Talia tells Damian that she found him with the help of the Lazarus Resin that has filtered out into the world. The island revealed itself at the conclusion of the tournament. The Shadows find that Master Dusk has fled. Talia deduces that he escaped to Corto Maltese. Damian gathers his friends, Ravager, Flatline, Hawke, and Respawn, and together they set out after Master Dusk.

The five arrive at Corto Maltese.  They arrive during a carnival, which will make finding Master Dusk that much more difficult. Robin suggests that they split up.  Flatline immediately decides to join Robin. Ravager notices Respawn wandering off and says that she will catch up with them. She removes her mask.

Rose follows Respawn, asking why he joined their little quest. She tells him that he is probably deciding to make a clean getaway.  She wants to know who this man is. Respawn removes his mask, but we only see that he too has white hair and is white. The shot shows Rose’s shocked face. Rose immediately asks him who else knows. Respawn replaces his mask saying that no one else knows, he only has his hate to keep him company. Rose tells him to follow her, she has to get this man out of there before anyone else finds out. This is the last we see of these two characters. (Editor’s Note: Look forward to this cliffhanger being resolved in the upcoming Shadow War crossover.)

Hawke, who is alone, senses that he is being followed. He leaps to the rooftop where he confronts the person following him. The mystery woman admits that she was watching all of the fights on Lazarus Island. Hawke asks why she did not enter the tournament, and she replies that she knew he would win. Hawke is ready for his rematch with Lady Shiva. Shiva is only there to offer her congratulations. She leaves, saying that there will be no more League of Lazarus or League of Assassins, only the League of Shadows, which on the island Talia declares. She approaches the other fighters remaining on the island with an offer.

Talia offers them a place on the League of Shadows. Should they refuse, they will be considered enemies. She leaves the fighters to think on her offer. Her destination is where Ra’s is holding his mother. Talia tells Mother Soul that they control the Lazarus pits and that the plan to unleash the Demon has failed. She wants to know about the Lazarus Resin trade.

On Corto Maltese, Robin and Flatline continue their search for Master Dusk. Flatline, however, is more interested in Talia. She has an interest in becoming Talia’s sidekick. Hawke interrupts them; they have found Master Dusk. The three engage Master Dusk and what is left of his men. Robin and Hawke team up to bring down Dusk.

Talia and her new band of Shadows and the fighters of the Lazarus Tournament arrive to take Dusk into custody. The warriors decide to join the party. In the evening, Robin and Flatline discuss Robin’s like of manga.  Flatline tells her new friend that her name is Nika. They close the conversation with a kiss to the joy of Ra’s and the surprise of Talia.

Back on Lazarus Island, Flatline says that she will return to Lord Death Man and resume her training. Damian needs to return to Gotham. He is holding the Lazarus Resin, will he use it to resurrect the dead Alfred Pennyworth?

Analysis: Robin #11 is a great wrap-up to the Lazarus Tournament arc. We get action and emotion in this issue.

Is this the first time we see Damian in a romantic moment? I am not sure, but I do like his development here as a character. It is Damian that leads the search for Master Dusk, and not out of coercion, as when he formed his Teen Titans. Damian also makes the no-kill order in the fight against Master Dusk, which is an order that Hawke has no problem following. Of course, there is a hint of a possible relationship between Damian and Nika.  Unfortunately, for now, it seems like Nika and Damian may be in a long-distance relationship, only time will tell.

There is also advancement in the Ra’s al Ghul organization. Now there is one League under the leadership of Talia al Ghul. Ra’s is more interested in dealing with his own mother, but Talia seems to have the same role as her own father when she tells her grandmother that total destruction is not the answer, there is a lot that needs to be saved. She also expresses pride that her own son defeated Mother Soul on his own.

I like the detail in the art in Robin #11. I especially want to highlight the panel where Damian steps in between Mother Soul and Ra’s. I liked the detail of seeing Ra’s own reflection in his sword. It is even easy to see the expression on the man’s face. This makes for a dynamic image and a gorgeous splash page.

The rest of the art is fantastic. The overall details in each of the panels are well-drawn. There are backgrounds in the image, and the coloration makes the lighting feel realistic. For example, the evening scenes really look like they are in the evening with the brightness and the lighting really giving the right feel.

This is a fantastic issue that really shows the development of Damian Wayne into his later teen years. I look forward to seeing this character growing more in the coming years.