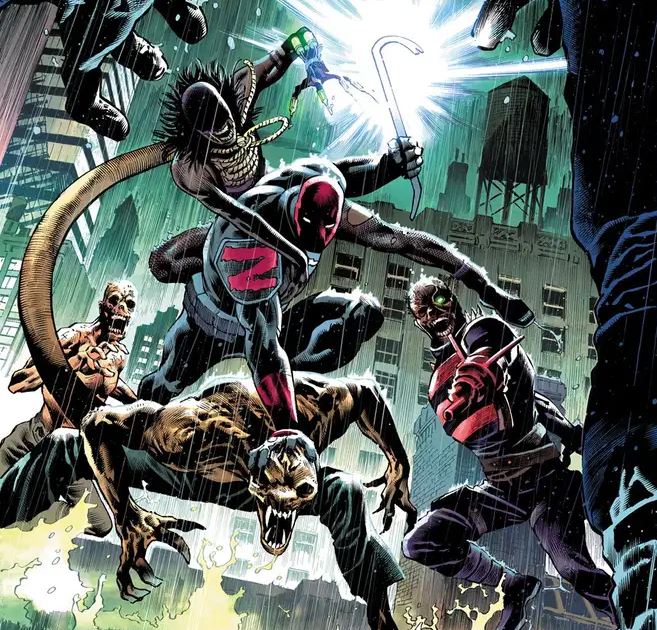 Overview: In Task Force Z #9, a member of Task Force Z dies, sacrificing their life to aid the team’s success while Mr. Bloom and Geri Powers begin amassing their own special ops unit, one that is fully subjugated to their commands.

Synopsis (spoilers ahead): Standing on the train tracks that run through Gotham City, Red Hood is greeted by Batgirl (Stephanie Brown), who offers him a cup of coffee as Task Force Z #9 begins. She offers a few words of advice. Powers International is up to something weird at the old Snyder Rink in Bludhaven, which is a piece of information she’s sure he’s interested in.

With that out of the way, Batgirl turns to leave but not before warning Jason that he needs to wrap this up and quickly. He’s close to irrevocably messing up by pushing people who care for them to their limit; he needs to end this now before their history won’t matter.

Over at a laboratory in Powers International HQ, Bloom presents a fully human-looking Man-Bat to Geri Powers, both to introduce them to each and as a witness to his progress. The new drug is working, and they’re conducting a field trial as they speak.

At the Snyder Ice Rink in Bludhaven, Task Force Z stealthily sneaks in, and after a barked command from Jason, spreads out to search the place. They discover the dead body of Hanna Hobart, otherwise known as Sundowner, and just as they turn to leave with her body in tow, the lights of the rink are turned off.

In Powers HQ, Bloom and Dr. Langstrom make their way into a restricted vault, availing themselves of the files locked away inside. They’re discovered by Derek Powers, the son of Geri Powers, an event all too pleasing to Mr. Bloom who states that he was hoping to get his hands on the youth.

The darkness of the Ice Rink is broken apart by a flare launched by KGBeast into the body of Sundowner. It’s not enough to keep her down, but a second flare does the trick. The monster is once again trapped within Hanna Hobart’s dead body.

Jason directs the team to get the hell out of there and to bring Hanna’s body with them. Their attempt to leave as undetected as they entered is shot by the arrival of several armed officers, who order them to get down on the ground.

Unfortunately, Task Force Z is about as mentally stable as they are morally conscientious, and Jason’s attempts to get his team to leave peacefully and not instigate a fight are quickly tossed out the window. A drone in the air letting out horrible screeching sounds ignites Bane, who isn’t able to control his rampage and charges forward toward the officers. The other members of Task Force Z are quick to follow, despite Jason’s demands for them to back off.

The one good thing to come from Bane’s mindless charge is a great distraction for the other villains and anti-heroes to make a break for their van and successfully complete a hasty retreat, with only minimal casualties sustained against the officers.

As Task Force Z #9 continues twenty minutes later, they arrive at an abandoned building secured for them by Harvey Dent, who welcomes them “home.” Jason states that the others need to get juiced up and that he himself needs to sleep, but both of those thoughts go out of the window as their new landlord makes his appearance.

Black Mask greets Jason and the others as Dent explains that he’s agreed to let bygones be bygones and rent them the building. At an exorbitant price, but still.

Jason, however, is having none of it. There is a level of psychotic, tortuous maniac that he can look away on, but Black Mask is many dead bodies past that.

Scoffing, Black Mask tells Jason to look around him; can he really still believe he’s one of the good guys?

It’s at this point in the conversation that the undead villains of Task Force Z decide that they need to eat, and if they’re not provided Resin then Black Mask will just have to do. It takes very little cajoling after almost having his neck bitten in two by Zsasz for Black Mask to agree to leave and reduce their rent by $6,000.

Dent tries to explain to Jason that he had no other choice, or option, but Jason brushes past him claiming he just needs sleep.

Three hours later, Dent presents Hanna Hobart’s body to Dr. Amelia and Delia, as a resource for them to use to extract the resin stored in her tissue. However, doing so will inevitably kill the woman for good, with no chance of them bringing her back.

Dent feels that they then don’t have a choice, after all, Hanna Hobart was a victim, and they owe it to her to find another way. Making his presence known, Jason states otherwise. There is no other way; Task Force Z is in between a rock and hard place, and with every minute they spend looking for a solution, Bloom and Powers grow more powerful. Making the executive decision, Jason flips a switch and activates the process to extract the resin, saying that Hanna would have wanted to help.

At Powers HQ, Geri Powers storms into Bloom’s laboratory, stating that everything is over and that Bloom is done. He shouldn’t have gone sneaking around into the restricted files if he wanted to continue working as he is. Shrugging off her ire, Bloom states he had already seen those files, no big deal, and that he’s used the information in them to create his own little Task Force to combat the one coming for them.

Once such file contained some interesting information about venom, and the confidential fact that Dr. Acheron implanted chips in people’s brains when he was working in her Hungarian lab, which, when activated, act as a calling device and bring home the person, free will be damned.

Shocked, Geri asks who he used it on, to which Bloom replies she should really ask him herself. Opening a door to the rooftop access, there in the thundering rain is no other than Bane, levitating several inches off the floor.

Analysis: It’s true monsters and mayhem and murderous undead villains, oh my, kind of situation in this issue of Task Force Z, as each small victory comes with its own depressing setback for Jason and his team.

Stephanie Brown’s appearance at the beginning of Task Force Z #9 was unexpected, but not an unwelcome, surprise; it’s nice to see that some people in the Bat-Family are able to have a normal, civil conversation. I am bummed that there wasn’t a bit more of that in the previous issue, but it’s clear that things haven’t gotten to the point of no return, just yet. Stephanie’s warnings don’t seem to have fallen on deaf ears, thankfully.

Whatever Mr. Bloom is in the midst of concocting in Powers HQ clearly has its own special blend of crazy, and the fact that Geri Powers proceeded forward with his unofficial employment shows that at least he’s in like company. Bane might now be a pawn in his hand, but Bloom isn’t done with his work just yet, and whatever its conclusion turns out to be will most definitely not be for the betterment of mankind.

Hard choices need to be made during desperate times; Harvey Dent seeks out a safe house under the authority of Black Mask (a decision that does not endear him to Jason for good reason), and Hanna Hobart gives her life fully for the sake of extracting Lazarus Resin. Her character was a minor one throughout the series, and her loss isn’t felt deeply at all. The decision, however, begs some questions regarding its morality, just like many others throughout the series.

Task Force Z, in a few words, is a fun series. It’s a bit wild and dark, dramatic, and a little over the top at times, but intriguing and with an engaging set of characters and a well-paced plot. The creative team, writer Matthew Rosenberg and artist Eddy Barrows, does a great job producing a story that is, overall, solid and enjoyable.