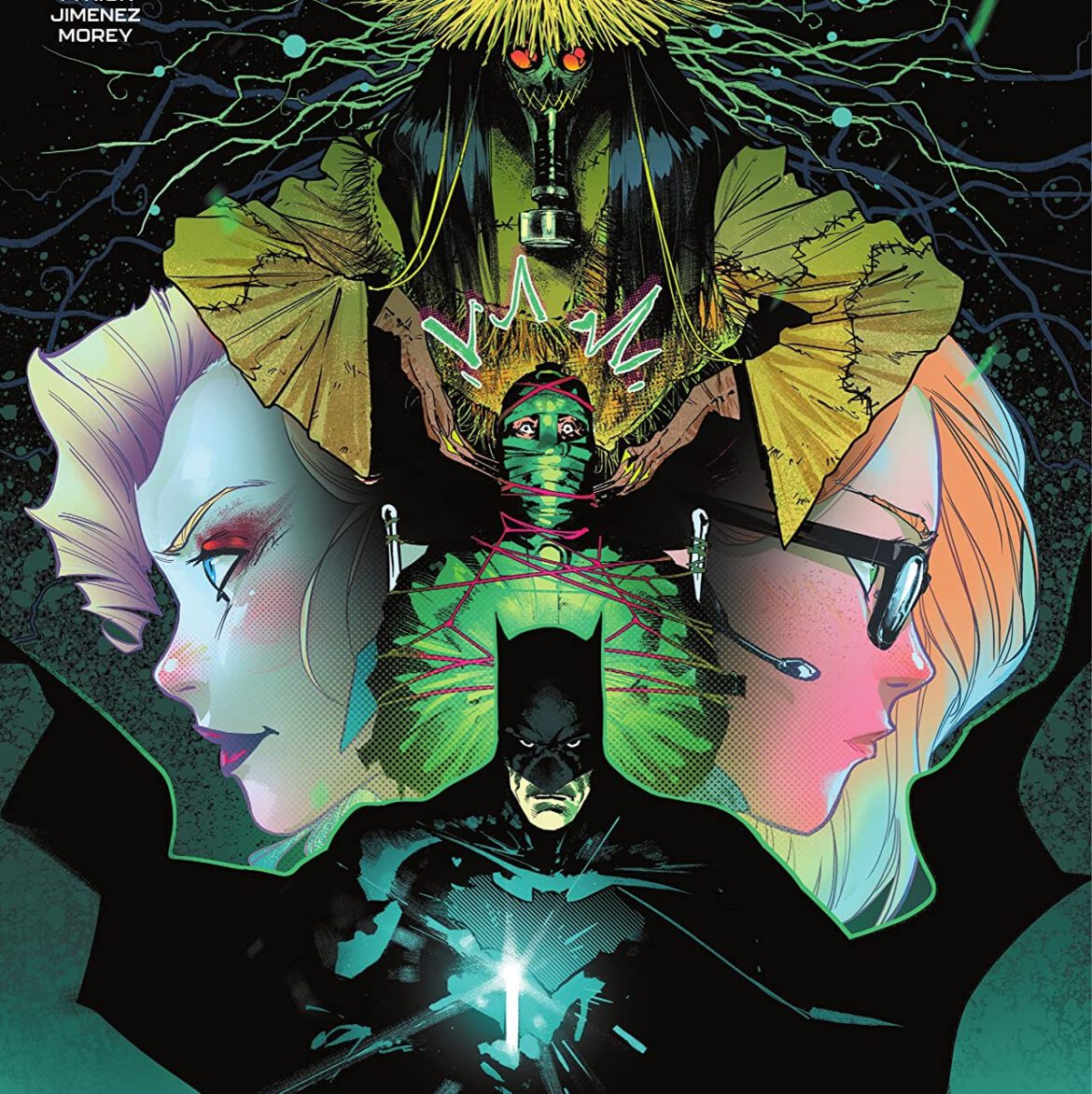 Overview: With the aid of Oracle, Batman investigates a mysterious Scarecrow attack on Mayor Christopher Nakano’s home in the pages of Batman #107.

Synopsis: Much like the beginning of the last issue, Batman #107 starts at a moment some time from now where Batman is being held captive by the Scarecrow. Through internal monologue, we see Bruce Wayne fighting off the effects of Scarecrow’s toxin, trying to work back to how he got into this predicament.

As Batman finds the stuffed scarecrow placed in Nakano’s home, news broadcasts speak to the increased level of violence and unease in the city. Gothamites are panicking, and it’s reflected everywhere.

Batman contacts Oracle and informs her that there is no toxin on this scarecrow. It’s just a straw man. He points out that Dr. Jonathan Crane, the Scarecrow, is using the city’s tension to instill fear without his usual chemical concoctions. As Oracle comes up with possible ways in which the scarecrow could have been placed inside the residence without anyone knowing, the lights come on, and Batman finds himself surrounded by the GCPD.

Commissioner Renee Montoya is leading the GCPD team, and they order Batman to leave the crime scene immediately. Montoya and Batman exchange terse words before Batman uses a smoke pellet to make his escape.

In Electric Town, a knife-wielding maniac runs around screaming about putting people back in the dirt. Harley Quinn drives up on her motorcycle and stops the maniac. She climbs off her bike, announces herself as Batman’s trusty sidekick, and approaches the suspect. Harley recognizes the man as an inmate at Arkham, one who must have escaped during the Joker attack a month ago. She notes that while he’s crazy now, screaming about vines beneath the city rising up, he’s normally sweet on his meds.

A GCPD officer pulls a gun on Harley from behind. Harley knocks the gun away from her with her bat, turning around only to find that she’s surrounded by GCPD. Before the police can open fire, a smoke bomb obscures their sight, and Ghost-Maker arrives just in time to save Harley.

As the smoke clears, the officer struck by Harley’s bat finds the perpetrator subdued. There’s a note on the Arkham inmate’s mask, and it notes that all the inmate needs is his meds; he will be fine with them. A woman with a rose and two pets made out of plants notes that Harley Quinn is still in Gotham, stating that there’s “still hope.”

At the Clocktower, Oracle tells Batman that she’s working on a new multi-Bat-signal system since the GCPD are no longer allies with Batman. Batman tells her that he searched Arkham’s ruins after Nakano’s home, finding a body double in Jonathan Crane’s cell. He needs Oracle to get the DNA analyzed.

After discussing what Scarecrow could be up to, Batman and Oracle turn to the Unsanity Collective. Oracle notes that their leader, Master Wyze, claims to have used old Mad Hatter tech to help people erase their bad memories. She notes that they’re lawbreakers but also transhumanists who believe in a utopia at heart. There’s only one way Oracle knows of to meet the Unsanity Collective, and that’s to infiltrate them via an old outpost in the Narrows.

In Midtown, Simon Saint is working in his office when his assistant comes in to tell him about an invitation to the A-Day Memorial from Mayor Nakano. Saint accepts, and once his assistant leaves, he tells Scarecrow that he’s alone.

Scarecrow tells Saint that fear is rising and that the only way to bring about the Magistrate is to advance their plan. People will have to die. Scarecrow asks Saint if he’s ready to sacrifice people to save Gotham.

In the Narrows, Matches Malone approaches the entrance to an Unsanity Collective outpost. He tells the outpost guard that he wants into the collective.

Analysis: Batman #107 picks up right after the ending of Batman #106 wherein Scarecrow is seen observing Mayor Nakano’s house. He’s since planted a scarecrow, and it’s sent officials spiraling into fear. This paired with recent, city-wide attacks from Bane and Joker, and now the Unsanity Collective, have sent Gotham over the tipping point. Vigilantes won’t cut it anymore, and the Magistrate, as seen in Future State: The Next Batman and Future State: Dark Detective, are soon to be implemented if Scarecrow and Simon Saint have their way.

Batman #107 lays a lot of groundwork for the Batman stories we can expect as this year continues. Batman and Scarecrow will play a cat-and-mouse game while Batman tries to figure out the said game, as well as the angle from Master Wyze and his Unsanity Collective.

We also are reintroduced to new members of the Bat-Family in this issue. According to Harley Quinn, she’s a sidekick now, and she’s bringing her unique brand of vigilante justice to the streets of Gotham. In her case, however, she encounters an Arkham inmate off his meds. This inmate is screaming about vines growing up from beneath the city and impending doom. Clearly this is a nod to Poison Ivy, who is still alive somewhere in Gotham City. In this case, Harley’s arc and path has clearly been set ahead of her.

Beyond the setup, what’s truly great about the Harley scene in this issue is the humanity and empathetic lens through which she views this inmate run amok. Even though she clobbered the man with a baseball bat, she quickly recognized that this would-be maniac doesn’t need draconian justice; he just needs his medication. It’s a minor note in a book that’s loaded with plot and exposition, but the humility of this scene shouldn’t be understated. It’s the best part of Batman #107.

Before running off with Ghost-Maker, Harley makes sure to leave a note to the police concerning this inmate’s needs. It speaks to the unique lens of psychiatry and sympathy through which Harley views the world, and it also helps explain and reaffirm why she would be welcomed into the Bat-Family.

The rest of this story is very much about setting chess pieces on the board. We learn what Batman knows and doesn’t know concerning Scarecrow’s plot, as well as what he needs to do in order to get to the bottom of this mystery before Scarecrow and Simon Saint can move forward with their plan. The pacing is slow, but the foundation for this greater story makes sense. It’s always nice to see Batman do a bit of detective work. If anything, this issue suffers from too much worldbuilding, as we learn about the new Bat-signal system and perhaps one news broadcast too many.

The art from Jorge Jimenez, however, steals the show. Jimenez’s reimagining of Scarecrow’s costume is mortifying, and it clearly elevates this classic Batman foe to a whole new level of terrifying. The gas mask, the straw hat, and the ragged cloak make Scarecrow out to be some hidden spectre haunting Gotham from an ethereal plane, and it’s amazing. When Simon Saint speaks to Scarecrow near this issue’s end, it’s not face-to-face. Saint speaks to Scarecrow through a window, where Dr. Crane is looming from a rooftop. This moment is eerie and easily the best panel of the issue.

It should be noted, earlier on in the issue when different broadcasts are catching readers up to speed with what’s been going on in Gotham, each broadcast uses a different image of Scarecrow. Jimenez uses this to cleverly tuck in nods to older comic incarnations, Batman: The Animated Series, and the Arkham Knight video game.

Synopsis (spoilers ahead): After “meditating” with two lovers aboard his private plane, the Ghost-Stream, Ghost-Maker suits up and prepares to infiltrate Devilskull Island. There, Madame Midas, the richest woman in the world and heiress to a massive, illicit crime ring dating back to the East India Trading Company, has called together a meeting with four of Ghost-Maker’s foes. Her plan is to get them to help her take out Ghost-Maker, since they all have fought him before.

Madame Midas has lured Ghost-Maker here, and he arrives, dispatching with her robot tigers before making his way into her base.

Analysis: This Ghost-Maker backup story is tonally way different than the main story in Batman #107, and for some, this could be a breath of fresh air. It’s silly, bombastic, and rife with classic adventure tropes. Ghost-Maker isn’t the more serious-minded friend we’ve met in previous issues of Batman here. He’s hungry for adventure, banter, and more along the lines of a swashbuckling, epic hero of old. Ghost-Maker’s villains, in turn, are equally silly.

The story is ridiculous, as it’s meant to be. Unfortunately, it’s just a tease, setting readers up for a gleeful bout of action that ends before it begins. To find out what happens, we’ll have to return for Ghost-Maker Chapter 2.

Batman #107 is heavy with exposition - that’s almost the entirety of what this issue is - but boy is it gorgeous! Jorge Jimenez delivers a phenomenal Scarecrow, and we can be hopeful that all of this sometimes unnecessary worldbuilding from writer James Tynion will have an amazing payoff down the line.