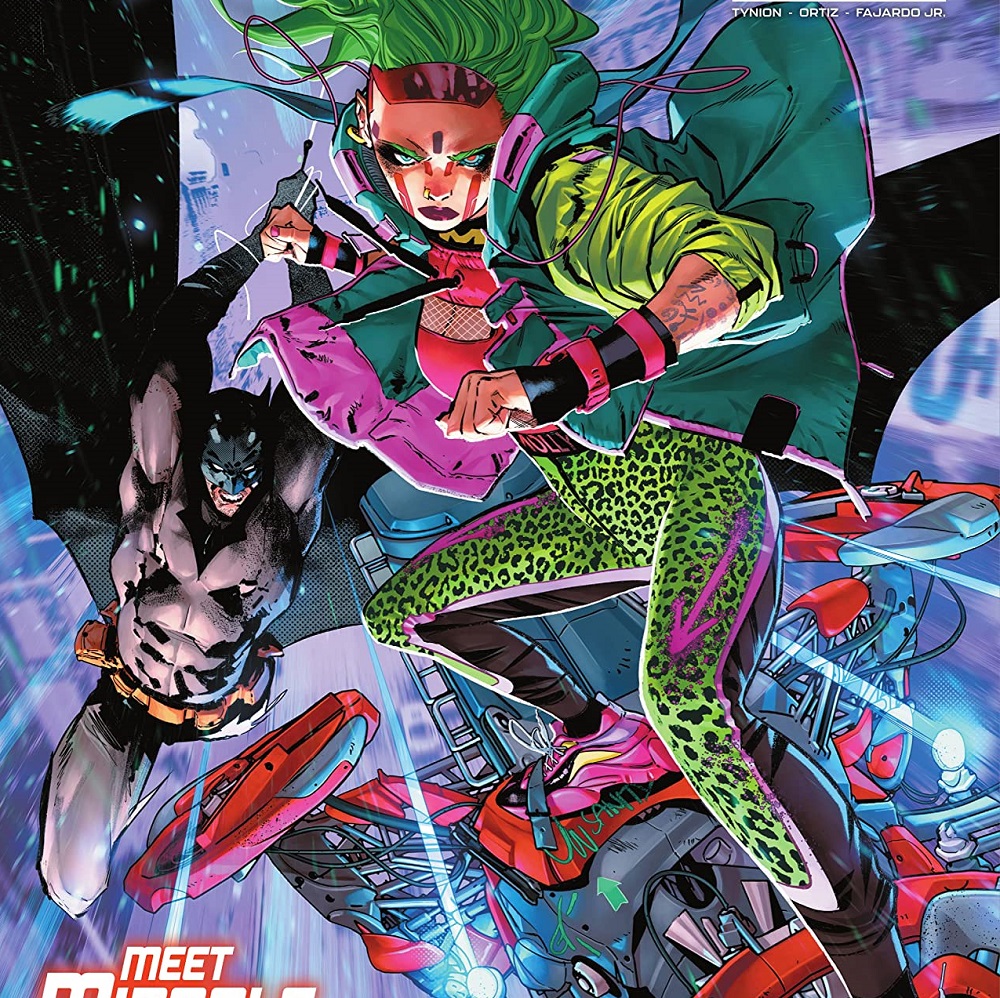 Synopsis: Batman #108 begins as the last two did, with Batman undergoing fear toxin treatments at the hands of Scarecrow at some point in the near future. Scarecrow is struggling this time, as he is battling against Bruce Wayne’s inner monologue, which is doing everything it can to keep Bruce’s mind intact.

In the present, Mayor Christopher Nakano holds a press conference outside of Gotham City Hall to honor Sean Mahoney, the security guard who survived the deadly Arkham attack in Infinite Frontier #0. As Mahoney is wheeled up to the podium to accept his honor, Simon Saint and his assistant Ricardo Huertas watch from the crowd.

Saint asks Ricardo what the PR team has found on Mahoney. Ricardo notes that Mahoney’s personnel file was burned up in the Arkham attack, so the team is concocting a new backstory that should please the public. Saint looks at the nearby rooftops and notes that a silhouette of Scarecrow is watching from the distance. Ricardo then runs up to Mahoney, asking the security guard if he would meet with Mr. Saint to talk about the future.

At the Clocktower, Oracle is listening to a Dr. Meridian (a reference to Dr. Chase Meridian from Batman Forever?) get interviewed on television while reviewing surveillance footage of City Hall. Oracle spots Scarecrow’s silhouette and radios Batman immediately.

At the Unsanity Collective compound, Bruce, undercover as Matches Malone, is being held in a cell by Master Wyze and a henchman named Breaker. Breaker is insistent that Matches is a cop, but Wyze knows better. He ran scans and can tell that Matches had some sort of psychic training, that this level of training is one belonging to no mere cop.

Wyze hands the fate of Matches Malone over to Miracle Molly, who has argued that regardless of who Matches really is, he deserves a chance to start over, much like everyone else in the Unsanity Collective. Molly takes Matches out of his cell and asks him to take off his fake disguise and quit with the act. She tosses Matches some black fabric, which he uses to fashion himself a mask like Zorro.

Molly then asks Matches what he wants, and he tells her that he just wants to understand what the Unsanity Collective is. She agrees to tell him, and the two get on a drone that ascends above the Gotham skyline.

In Midtown, Sean Mahoney meets with Simon Saint. Saint asks Mahoney what his background is, and Mahoney mentions that he comes from a long line of police officers. Mahoney’s father, however, was fired by Commissioner Gordon for taking a bribe, and Mahoney suspects it’s why he wasn’t hired to continue the tradition of a Mahoney in the GCPD. As an alternative, he wound up as a guard at Arkham.

Saint moves on to his next line of questioning, which is asking Mahoney to join the Magistrate program. Mahoney mentions that he’s honored, but he lost an arm and a leg in the Arkham attack, which makes him useless as a keeper of the peace. Saint then asks his assistant, Ricardo, to showcase the top-of-the-line prosthetics that Saint Industries is known for. Were Mahoney to agree to be the first Peacekeeper, he would in turn get prosthetic replacement body parts free of charge. Mahoney agrees immediately.

Meanwhile, Miracle Molly takes Matches to one of the Unsanity Collective’s real outposts, where Molly disassembles stolen technology and figures out a way to make it so that they could transform and upgrade their own members’ cybernetic implants. Molly then tells Matches that the whole idea of the Unsanity Collective is to create a utopian vision outside of what modern society considers sane, breaking the dog-eat-dog cycle of the world, through advanced technology.

After they talk some more, Molly reveals that she knows Matches is Batman in disguise. He affirms her suspicion and then tells her he came to find out who hired the Unsanity Collective to rob and terrify media moguls. Molly tells Batman that they were approached by Simon Saint.

Analysis: Batman #108 continues with the exposition-heavy trend we saw in the last issue. Much of the exposition is at the hands of Miracle Molly, a new character from James Tynion IV and Jorge Jimenez that we’re finally formally introduced to. In turn, a good chunk of this issue is devoted to Molly explaining hers and the Unsanity Collective’s motivations. On the one hand, it’s nice to know who they are. In this case, the organization is an idyllic group of technophiles who want to build a utopian society free of money through repurposed technology. In a way, the Unsanity Collective is similar to the society Batman rogue Anarky created in the pages of James Tynion’s Detective Comics run. The twist here, however, is the cyberpunk aesthetic with all of the various implants each member of the Unsanity Collective is wearing. Miracle Molly, in turn, gets her namesake for her ability to figure out how to create and program these implants among the collective’s ranks.

The collective’s mission is simple, and it seems a bit too simple for how many pages were devoted to Batman’s deep dive into this organization. On the flip side, the other half of the issue was devoted to Simon Saint wooing Arkham security guard and A-Day survivor Sean Mahoney. While it was interesting to see how the pieces fall into place for Sean Mahoney to become Peacekeeper-01, did we really need this? Peacekeeper-01 was the big bad for Future State, and for the past few issues, we’ve seen the idea of the Magistrate grow from a seed into a proposal with a candidate, Sean Mahoney, already hand-picked by the men in charge. The roadmap was built, and the only “new” element brought to the table in these last few Batman comics is the idea that Scarecrow has some plan involved with the creation of the Magistrate. Yet, Scarecrow is essentially just a ghost in this series so far. He’s used as a haunt for both Christopher Nakano and Simon Saint in order to get them to do his bidding. In Saint’s case, Scarecrow is lurking everywhere, which makes me wonder why Saint needs constant prodding to follow along with the plan? Especially when it ultimately leads to Oracle discovering that Scarecrow was at the City Hall event (it should be noted that Oracle quickly disappears from the book after radioing Batman once).

The point of me mentioning all of this is to express that it feels like we’re focusing on the unimportant parts of this story. We’ve already learned which puzzle pieces are used to set the scene for Future State. We don’t necessarily need to see these pieces physically inserted into the puzzle, as we, the readers, can already connect the dots between Sean Mahoney, Simon Saint, Mayor Nakano, and the Magistrate program. In telling us this story in Batman #108 anyway, it feels like the Batman title is just spinning its wheels at the moment. Also, why did Oracle randomly show up and disappear from the rest of the issue? Seriously?

As always, Jimenez’s art is phenomenal. Batman #108 opens with one incredibly trippy image of Scarecrow toying with Batman at some undetermined point in the future. It’s cool, creepy, and psychedelic, especially with Tomeu Morey’s stellar colorwork. As a nice ending point, this first story ends with another full-page image, this one being of Sean Mahoney undergoing the painful surgeries to become Peacekeeper-01.

The art in between is gorgeous, and Jimenez and Morey deliver their best in finding creative ways to keep readers engaged in an issue where people mostly orate at each other.

Synopsis: The backup for Batman #108 sees Ghost-Maker continuing his assault on Devil Skull Island, facing off against laser tigers. Meanwhile, Madame Midas, the owner of the island, coaxes the villainous Kid Kawaii into delivering an origin story of sorts. At the end of the story, Kawaii recommends that the villains abandon the island because Ghost-Maker has most likely already predicted their strategy. Madame Midas refuses.

Analysis: I’m not sure what the point of this Ghost-Maker backup is. In Batman #107, we were introduced to a whole gallery of rogues for Ghost-Maker. They were all cute and silly, as was this whole world that Ghost-Maker lives in. It plays out like a Manga or an anime, and it’s very over the top.

In this second chapter found in Batman #108, however, we stop the already paper-thin narrative to divert to a backstory of one of the side villains. In this backstory, Kid Kawaii recounts a previous encounter with Ghost-Maker, which eats up most of the allotted space for the backup story. It’s even less interesting than the overall narrative, and part of that could be that, in both of these chapters, there’s really nothing at stake. We don’t know who these characters are, and we don’t have a reason to feel one way or another about them. There’s no MacGuffin at play and nothing at stake. This story hinges on us wanting to watch Ghost-Maker fight crime, but so far, it seems like the character of Ghost-Maker just does this for the lolz. That’s not an enticing reason to keep reading.

Batman #108 is part tired retread of how the Magistrate came to be in DC’s Future State event and part essay about why we should care about the Unsanity Collective, but boy is it pretty to look at! In short, it’s a bit of a snooze, albeit a colorful snooze.