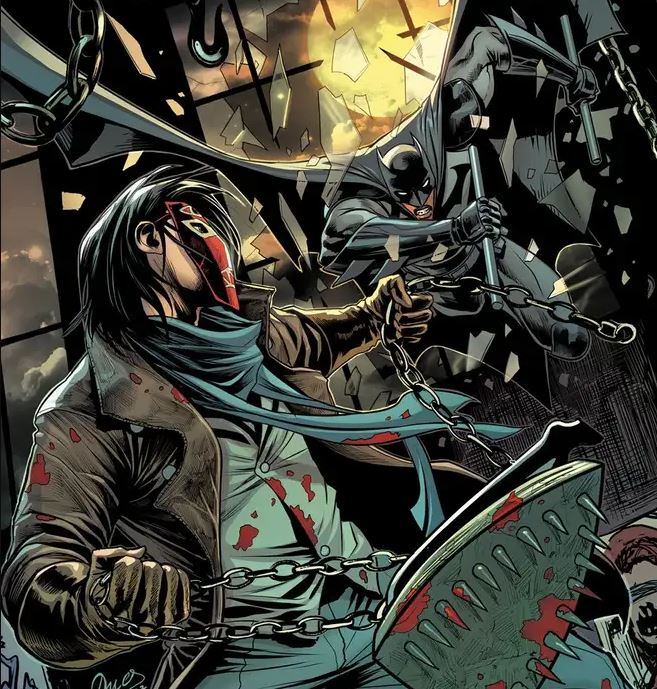 Overview: In I Am Batman #10, the battle with Manray reaches it’s dramatic conclusion, where Batman and the NYPD descend upon City Hall!

Synopsis (spoilers ahead): As I Am Batman #10 begins, Batman and Detective Chubb confront the Mayor over anything he might be guilty of that would put Manray’s sights on him. Angry from the accusation, the Mayor storms off after accusing Batman of having his own demons. Chubb is ponderous and reminds New York’s Dark Knight that she’ll arrest him if she’ll have to.

At One Police Plaza, Officers Desante and Keanan review footage from the evening’s meeting between Batman and the Mayor, vowing to execute Manray should they get to him. Hadiyah phones Jace, informing him of the legend of the Hotlist, essentially a blackmail sheet for very influential people.

At City Hall, Manray quickly attacks the Mayor’s security guard, making short work of them as the Mayor escapes into the elevator. In the lobby, Manray finishes off every security officer on the bottom floor and is about to finish the Mayor before Batman arrives in the nick of time. Determined not to fail like their last encounter, Jace punches it out with Manray, who tries to distract Batman with a rigged explosion on the streets outside. Nevertheless Batman manages to outfight him, knocking him on his back.

Officer Keanan arrives and attempts to shoot Manray in the head, but is shot by Detective Chubb. As the streets burn aflame, Chubb states that the surviving purveyors of the carnage have no idea how bad things just got.

Analysis: So I’m coming into I Am Batman #10 as a new reader, having tertiarily read some of Jace Fox’s early adventures as Batman during the Fear State saga. I’m familiar with him, but haven’t been overtly so until reading the preceding issues that led up to the conclusion of this five-part arc.

I’m also coming into this a big fan of John Ridley’s The Other History of the DC Universe, which was a tour de force of memoir-style writing of various minority heroes in the DC World. That, I maintain, is the single best miniseries DC has published in the last thirty-five years. I cannot recommend that series enough.

So it was Ridley more than Jace Fox that captured my interest when starting this storyline, and overall I feel it’s been a mixed bag. The artwork has been solid and the storyline is decent, but the execution leaves much to be desired. It reads very…CW storytelling, where characters plainly state their feelings to each other dispassionately, rarely in a state of inertia, constantly moving despite the horrors and self-doubt that they loudly talk about. Scenes early in the storyline on like Chubb’s partner giving her encouragement, the Mayor’s office talking about the arrival of Batman (with the Mayor addressing his subordinates by reminding them of their occupation), Jace’s doubt…it’s all been incredibly exposition-soaked, lacking a felt reality that would make this dark and violent story more potent. It’s telling, not showing, essentially. That’s been frustrating to read because the idea of a black Batman is rich with potential, and I feel this story in its conception works to build up that potential. One of the best moments was in Part 2 (I Am Batman #7) where Jace refused to go after Rubel’s murderer because he was already working a Gray-Market gun smuggling case, and didn’t think he needed to put a serial killer on the top of his list just because the victim was rich. Bruce Wayne would never do that, but it doesn’t make Jace out to be a heartless monster either. It’s especially interesting considering he’s working as a member of the Fox family, with his father Lucius in charge of the Wayne fortune, and his lawyer mother and two sisters trying to find their way in the world. All of that stuff is great and helps make this character something new to really look out for, rather than just a race-traded variant of an iconic hero.

The politics of this story are tricky, because of the politically volatile times we live in, readers are going to be more keyed into issues like police brutality, “wokeism”, centrist politics, and the like. It’s a tightrope for Ridley because he’s got to incorporate disgusting, vile, bigoted policemen into his story without them coming off as caricatures. I don’t envy him, as the cops in this story at once come off as both cartoonish and entirely believable. Where I think Ridley stumbles is in some of the good guys’ platitudes. Chubb’s proclaiming that the police must deal out equal or less force felt like a throw-away line unbelievable for the moment (when Batman was beating up an already subdued criminal). There’s also an execrably written scene where Tiffany Fox tells Jace of their mother’s work and rattles off terms like “recidivism” that really just reeks of adult conversational politics as understood by adults and not a kid who’s not even a teen yet. Politics are good, and with black characters, they are intrinsic and necessary, but the voices have to be believable.

Ultimately though, and getting to the meat of I Am Batman #10, the real highlight is Manray. He was a pretty attractive villain throughout. The whole serial-killer-attacking-corrupt-politicians thing has been done to death (hell, it was done in The Batman for goodness’ sakes which I’m sure Ridley would’ve reacted to), but the clearly disturbed language if the character made him stand out. He’s got a creepy, haunted, hipster look to him with the scarf, and would make sense in a latter-day Babs Gordon Batgirl story, but he’s a strong antagonist for Jace to go up against, especially as he got to Jace both physically and mentally.

The storyline overall, in my opinion, got better as it went along but always had some dings in the writing that held it back. That’s gonna continue to be a problem with the run with Ridley can’t find a way to better specify the voices of these characters. Still, the series is solid and there are far worse hands that could’ve tried this kind of political storytelling.

Overall, this final fifth chapter served as a suitably action-packed finale that was well-paced.