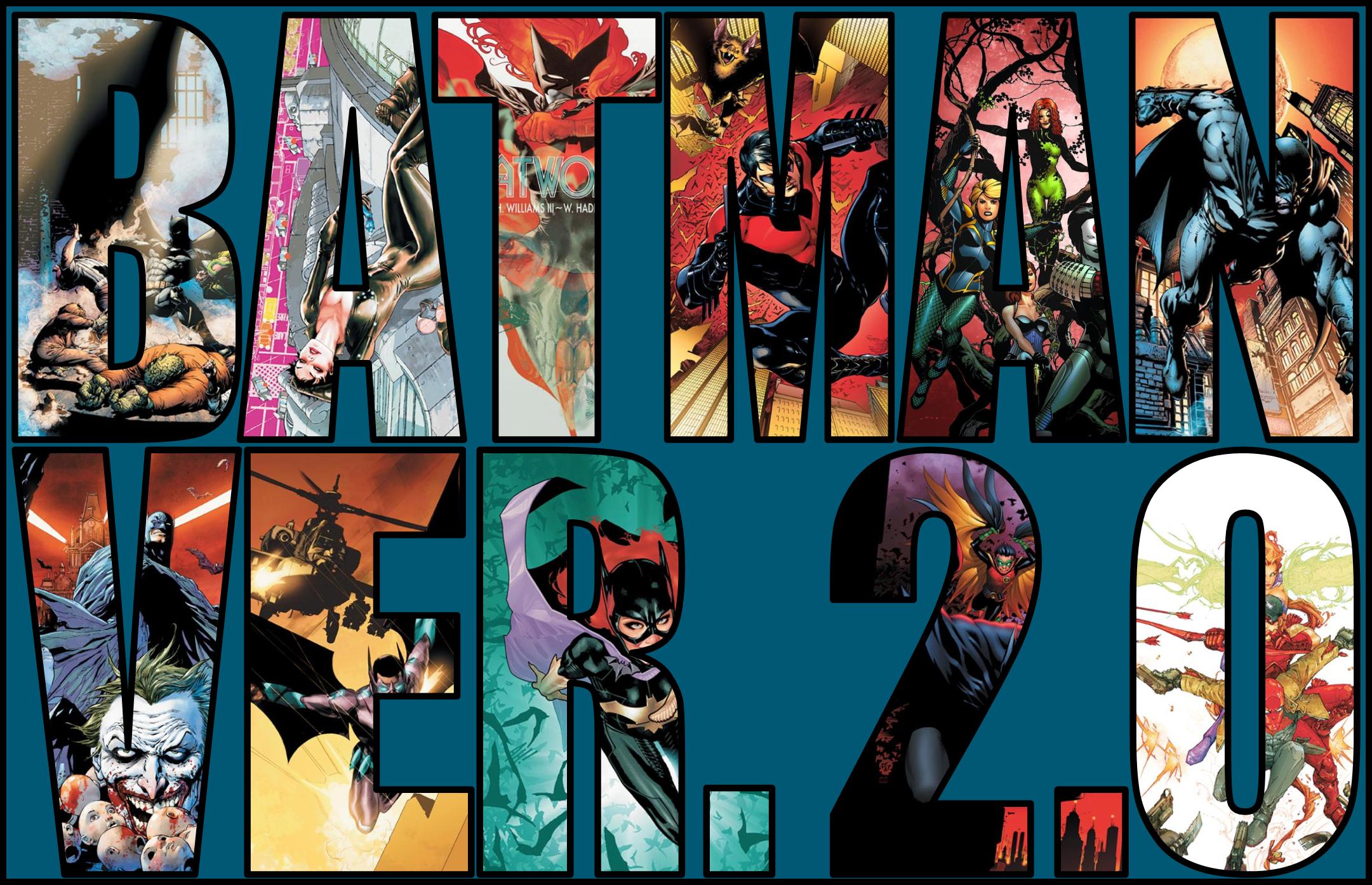 On Monday, DC announced the new titles and their creative teams for the Bat books in the post-Flashpoint Universe. This is going to be my thoughts on the characters DC has changed, the new titles, the new costumes and the creative teams; if you don’t already know the changes, make sure you check out the previous post on the site.

Check out all my thoughts after the jump

First of all, we have ‘Detective Comics’ and ‘Batman’, I was surprised when they announced they were renumbering these titles, their high numbers are extremely impressive, ‘Detective Comics’ only being beaten by ‘Action Comics’ and it’s the comic that the company is named after. However, what we get is basically a creative team switch; Tony Daniel is moving from ‘Batman’ to ‘Detective Comics’ and Scott Snyder vice versa. The most important thing to note here is that Bruce Wayne is now the one and only Batman! Tony Daniel will once again be tackling both art and writing duties (I’m taking bets on how long that will last) and Scott Snyder will continue his writing with former ‘Spawn’ artist Greg Capullo.

I’m not sure how I feel about these, both Daniel and Snyder made their writing debut with Dick under the cowl, it will be very interesting to see their takes on Bruce, particularly Snyder whose work on ‘Detective Comic ‘ is currently outstanding. I’m also not sure if Capullo’s art style, which is very gritty and realistic, will fit the tone of Snyder’s writing; I don’t believe it would work in ‘Detective Comics’ but perhaps with Bruce it will work better. The reason Jock’s art matches Snyder’s writing so well is because the looseness of it matches the athleticism of Snyder’s Dick Grayson. Francesco Francavilla’s art, on the other hand, complements Snyder’s horror themes, themes which I suspect will disappear after the revamp. I have a feeling that with the revamp we are going to return to a grittier and angrier Bruce Wayne, if this is the case, Capullo’s art will work very well and I’m sure that Snyder will find the right voice for Bruce.

At first glance, I thought Daniel’s Batman looked wrong but then I realized that I am used to him drawing Dick Grayson Batman, this is good as it shows we will be able to differentiate the Batmen and I hope that this translates to the writing as well. Having said that, considering this is a reinvention of the character, every title is going to seem as if the characters are wrong because, as of yet, we don’t know what characteristics they have. I also believe that for the first year, we are going to have very inconsistent characters, especially Batman who will be written by many different writers. This is because, until Batman’s voice is completely solid, there will be lots of interpretations of the new character, some of which are sure to clash. The definitive voice of these new interpretations will most likely come from fan-favorite writers like Scott Snyder.

David Finch will also be renumbering ‘Batman: The Dark Knight’, despite having only released two issues at this point in time (that has to be a record). Apparently, Finch will be starting a new story arc within the title but there is no evidence to say that the current arc will finish, making me very skeptical as to whether I should even bother picking up the the final 2/3 issues. Jay Fabok will also be helping Finch to get the issues out on time but not as a fill-in artist, I get the impression he is working more as a shadow artist, perhaps drawing the panels that Finch can’t be bothered to do. From the front cover, we also see the new bat-suit in action.

‘Batman and Robin’ is also getting a new issue one and this is possibly the comic that I am most annoyed about; not only is it Bruce Wayne as Batman but it’s by the creative team of Peter Tomasi and Patrick Gleason! Listeners of The Batman Universe Comic Podcast will know how I felt about this creative team’s last run on ‘Batman and Robin’. I fear for what Damian will be like in this revamp of DC because his character has progressed so much since his introduction- he has gone from one of the DCU’s most irritating characters to one of its most loved. Tomasi never understood this, shown through his writing of Damian as the insolent and arrogant son of Talia Al Ghul from the character’s inception, with Tomasi now writing the character from an issue one, I am very scared that Damian will return to the character we saw in ‘Batman and Son’ (except not as well written) and stay that way. As well as this, we know from Grant Morrison’s ‘Batman: The Return’ that Bruce and Damian cannot work together, how will this translate in Tomasi’s writing or will the new Bruce just be more vicious and accept Damian’s brutal methods?

I mentioned Gleason’s inconsistent art but he has redesigned Robin and it looks ridiculous! He always did take liberties as he scalloped the bottom of Damian’s cape in ‘Batman and Robin’ but he has gone one step further in this and shredded the end of Damian’s cape, not to looked ripped or frayed but to look like feathers… get it, because he’s called Robin? Oh Gleason, you are a genius. Except you are really not because the whole point of Robin’s cape is to act as a parachute and you’ve just made it completely useless for its only purpose, if Robin jumps from a high building now, all that will happen is there will be a small, bloody mess of irony splattered across Gotham City’s sidewalks.

I have a theory about this revamp, if the focus of it is to gain new readers and to better fit the wants of modern readers, it is very possible that these new characters will be more in line with Batman’s portrayal in film, in particular, Nolan’s interpretations. This next book could fit directly into that; ‘Batgirl’ #1. First of all, I’ll quickly get my thought out of the way. It’s written by Gail Simone… that’s enough for me to know that this book will be terrible, let alone the fact that Batgirl is Barbara Gordon! Secondly, with Barbara being Batgirl and the possibility that origins are changed and things like that, it could mean that Alan Moore’s masterpiece ‘The Killing Joke’ is now out of continuity. If that is the case, it also eliminates the Joker’s most popular and well known origin story, leaving it open for the Joker to be more like Nolan’s interpretation- I do not like that idea at all but I do feel it’s a possibility.

I may actually enjoy ‘Birds of Prey’ now as artist Jesus Saiz stays on with new writer Duane Swierczynski, the birds have radically redesigned costumes and the book is described as ‘hard-hitting’ so I’m actually excited for this one, it’s just a shame that it’s the only book I’m actually excited for, actually, that’s not true because we also, finally, have the first issue of ‘Batwoman’! I’m not sure if this has been changed so that it now fits into the post-Flashpoint universe or if it was always meant to be here, all I know is that I’m glad it’s still coming out because I would have been really annoyed if, after all the hype, DC simply cancelled it.

The other new female focused first is ‘Catwoman’ #1, it appears that Selina Kyle may go back to being more of a villain than a hero which I am going to really enjoy because I feel she is starting to lose her character now that she is written with ethics. The downside for me is that the artist is going to be Guillem March, I have nothing against him, I just don’t enjoy his art.

As for the men of the Batman Universe, Dick Grayson will be returning and resuming his pre-Batman role in ‘Nightwing’ #1, interestingly, from what I interpreted out of the solicitations, Dick Grayson chooses to become Nightwing once again, could this be the storyline we will see in ‘Batman’’ #713? If it is, it’s going to be very interesting why and how that works with the rest of the altered continuity, nevertheless, I am happy to see Kyle Higgins on a book; I loved his work in the ‘Batman’ and ‘Detective Comic’ annuals and so far I’m enjoying his writing in ‘Gates of Gotham’. I do, however, prefer Nightwing’s previous costume but it’s not too dissimilar and looks cool nevertheless, not sure about the red eyes though.

Jason Todd will be returning as the Red Hood in ‘Red Hood and the Outlaws’ #1…I see no need for this book. If Jason isn’t just DC’s answer to the Punisher then it might be quite fun and he appears to be sporting a bat symbol on his chest which implies he’s friendly with Bruce, if that is the case I’ll be more inclined to pick this up. I do, however, like the costume. It’s definitely more appealing to me than the glass dome.

Finally, we have an announcement from Grant Morrison that ‘Batman Incorporated’ will be returning with a #1, however, this will be released in 2012. I don’t know how to comment on this… the title could go in any number of directions, all I know is I’m looking forward to it. As well as that, a new Morrison title ‘Batman: Leviathan’ will also be released after ‘Incorporated’ (at least I think that’s what it said, the statement may have just been badly worded and the title of the arc in ‘Incorporated’ is ‘Batman: Leviathan’).