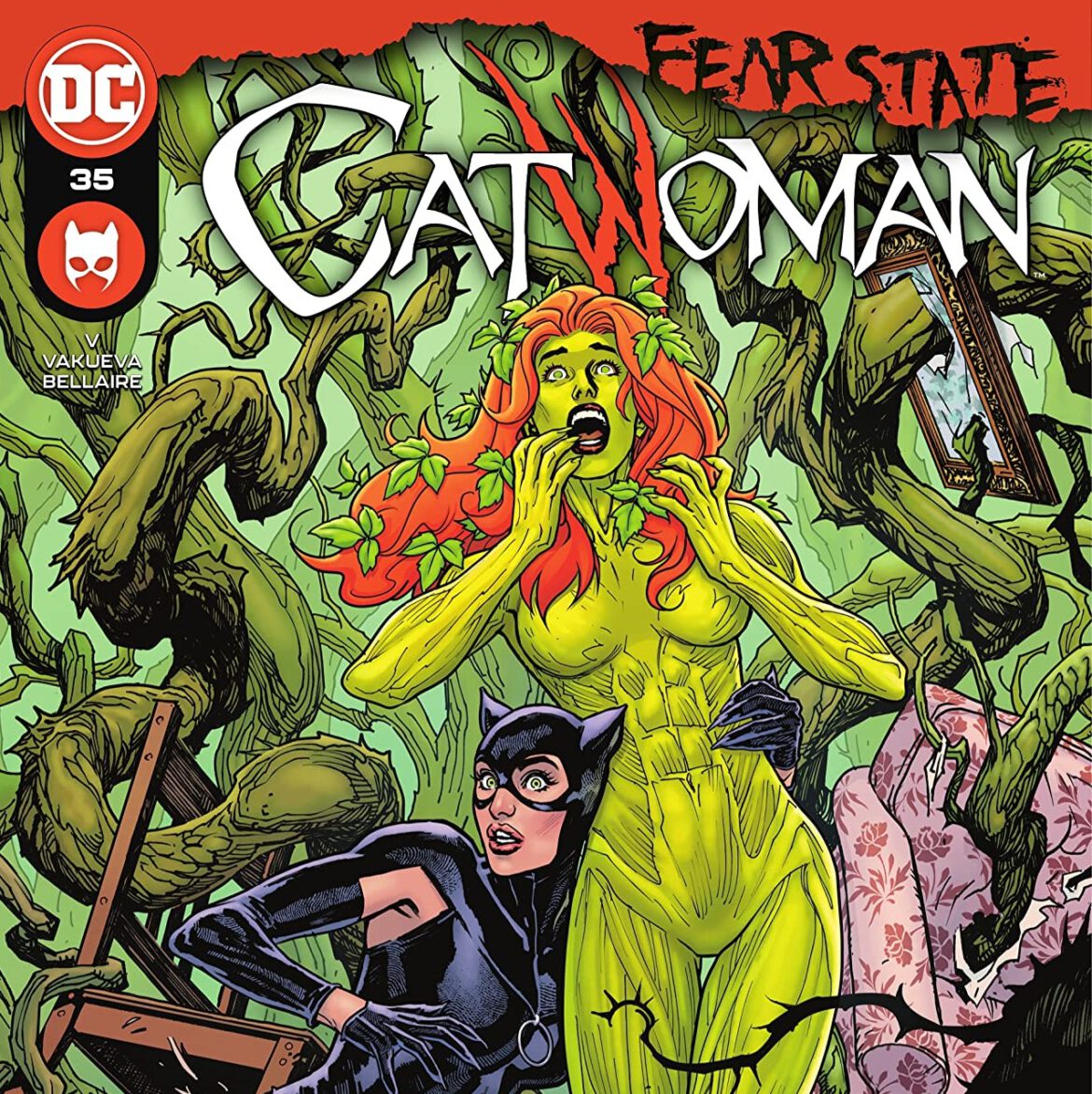 Overview: In Catwoman #35, Catwoman and her allies face the onslaught of the Magistrate as Fear State crashes upon them.

Synopsis (spoilers ahead): Catwoman #35 begins in Alleytown, atop Catwoman’s headquarters, the Nest, a bloody and battered Selina finds a police lieutenant investigating Detective Hadley’s murder scene, where he saved Maggie, Selina’s sister, from an automated sniper’s bullet. Father Valley escaped dressed as a firefighter, and Maggie herself left Selina to escape the danger Catwoman always brings to those who love her.

As the Magistrate’s forces convergence on Alleytown, Clayface rallies the villains who have joined Catwoman – Firefly, Cheshire, Knockout, and Killer Croc, to face down the mech-suited security forces.

Selina confides in her friend Leo, who was brutally tortured and almost slaughtered by Valley, but they are interrupted by the false Oracle’s broadcast as seen in Batman: Fear State: Alpha #1, proclaiming that Batman is dead, causing Selina to rush to find her love in Gotham proper.

The false Oracle’s broadcast turns out to have been partly a trap laid specifically for Catwoman, as Magistrate forces surround her motorcycle, but Selina is saved by Shoes, who shows her one of Oracle’s real message relays, letting her know that Bruce is alive, as Harley and Gardener head to Alleytown to pick up the part of Ivy Catwoman is protecting (as seen also in Batman #113).

Analysis: After a bit of a letdown in quality last issue, Ram V returns to powerful form with the first of his four final issues of Catwoman (his run will conclude in December, according to his recent newsletter). The plotting and emotion return, with the devastating death of Detective Hadley taking the first half of the story and Catwoman’s desperate fear for Batman in the second half. In another fascinating parallel with Genevieve Valentine’s brilliant run on Catwoman, the emotional conflict between Catwoman’s passion for Batman and her painful relationship with a new love interest (here, Detective Hadley, in Valentine’s run, Eiko Hasigawa), Ram V’s emotional highlight of the issue is Selina’s connection to Batman, her painful passion for the Dark Knight and his love for her that makes us root for them to find a way to truly connect, despite all the obstacles. Guest artist Nina Vakeuva, though not quite as assured and polished as series regular artist Fernando Blanco, does a very excellent job at remaining consistent with the noir, red and black washed style of the book set by Blanco, and provides very intense emotion which meets Ram V’s script precisely and delicately.

The scripting manages to fulfill the dual necessity of starting the wrap-up of Ram V’s storylines that have been in process since at least issue #25 and possibly some of the elements seen in his two-issue arc during Jones’s run on the title. We see the Poison Ivy, Simon Saint, Father Valley, Riddler and Penguin, and Wight Witch threads all converging, some in detailed conversations like Penguin and Riddler, some in a fleeting panel like Wight Witch and Gardener and Harley. The latter image was also seen in Batman, as mentioned in the summary, and while it does feel a tad redundant, since neither of these issues actually develops that plotline in any way, just showing the two characters walking together towards their goal of finding Ivy’s missing part, it also does serve to tie things together nicely. It will be quite interesting to see if Ram V pulls off another Catwoman #25 feat, a story that works pretty firmly by itself but also fulfills a vital role in the larger storyline. One wonders how it will further tie into the solo Harley Quinn series as well, which has also been playing with Harley and Catwoman’s relationship, though that series is not referenced in editor’s notes, though those are liberally deployed in this issue.

Yanick Paquette provides the main cover for Catwoman #35, showing a somewhat comically surprised Catwoman and Poison Ivy facing a menacing forest – a tad misleading, as Ivy herself doesn’t appear in any significant way in this specific issue, though her presence is felt in motivation. Jenny Frison provides a sultry Selina in a sleeveless black dress holding a purple cord, the black of her dress and hair fading into the black background in a very stylish effect, though like the Paquette cover, it doesn’t really connect very firmly to the interiors.

Catwoman is back on track as Ram V ramps up to the conclusion of his run in Fear State.