Why Convergence Breaks My Heart 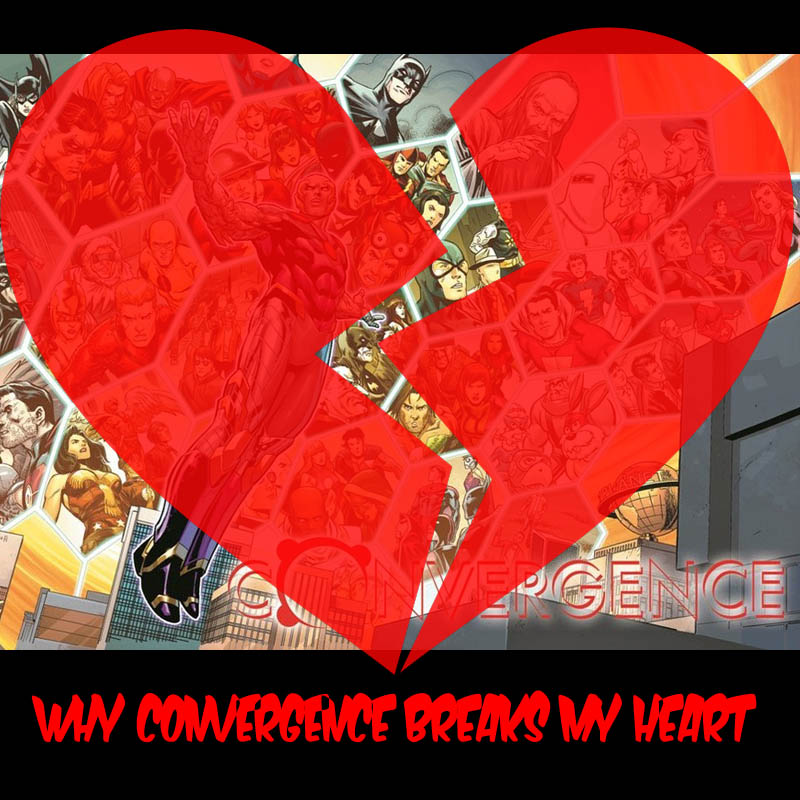 Don’t worry, I’ll explain why my heart is breaking.  In the meantime, I do want to at least introduce Convergence.  For the majority of you reading this (I sure hope it’s all of you), you already know about the event known as Convergence, but just in case there are some of you lingering Stella’s out there (because I generally ignore all news and spoilers), I do want to at least introduce the event.

Convergence is an event like Villain’s Month and Future’s End before it, where all titles will be put on hiatus (this time for two months rather than one) and there will be several specials that examine characters in the pre-new 52 timeline.  YES!  PRE-NEW 52!!!  There are also some Flashpoint characters that flit in and out of the issues, and a mysterious ‘dome’ that makes an appearance in several books.

Convergence will launch April 1 with a zero issue that spins out of the finales of “Earth 2: World’s End” and “The New 52: Futures End,” leading to an eight-part main series and 40 two-part miniseries that examine the worlds from the past eight decades of the DC Universe, and the heroes and villains they contain.  According to Co-Publisher Jim Lee, the event will tackle the most-asked questions since DC rebooted its superhero line in 2011 with the New 52: whether key stories in DC history still “count” in continuity, and what happened to some of the beloved characters that haven’t been reintroduced in the past three years. The miniseries will also introduce a new villain, Tellos, who is “born of Brainiac and this mysterious planet.”

So this article is entitled ‘Why Convergence Breaks My Heart’ or ‘Why Convergence is Detrimental for Comic Readers.’  I have five simple reasons to explain why I believe this is true, so put on your learning caps and let’s begin! I believe that this whole quote is apropos for Convergence.  As comic readers, we have left a home that has lasted through three Crises (or more, depending on how you look at it) and over 75 years.  And what a home it was!  But we were given a new home, albeit one that took some time to adjust to.  Adjust we did, and I dare say some of us have embraced the new universe.  Do we go back to our home?  Just as Webber saw when he revisited his home, things are never the same as when you leave them, and inevitably, you will be disappointed and perhaps disheartened by what you see if you return. 2)  There is a song by Illy, an Australian hip hop artist, entitled ‘It Can Wait.’  The chorus says

Hmm…yes, I do believe that it applies here!  Something that troubles me greatly is the fact that many of us are going to get really excited (over-excited?) for this but it will be over in the blink of an eye (i.e. two months).  It is a brief ‘high,’ and one which may be difficult to get over.  I feel like this ‘event’ is in fact different from Villain’s Month and Future’s End before it because those were tie-ins to a larger event that spanned several months, they were both ‘new,’ and really, we had no emotional connection to the events besides being readers or followers of the series, perhaps not yet as lifelong fans.  These were both one month long, but I think we were satisfied that they were that short (no ‘high’ included).  What can Convergence really do for us when it is so short…besides make us want more of something we cannot have. 3)  One of the draws that DC Comics is putting out there to increase the hype is the fact that there are original creators coming back to the titles just for Convergence.  Hmmm, really?  I see some, that is true, but I am more overwhelmed by names of people that I have never heard of or names of creators that have had no previous connection to the character(s) they are in charge of writing.  I trust people more if I’ve had experience with them in the past and I know that they can actually write the character they are entrusted with.  People who know and me and listen to any of the shows I am on will totally be able to read between the lines and figure out which book I have the biggest problem with.  Go big or go home, DC.  If you wanted to pull people in and get their trust, you should have brought in 100% of the original creators, or at least creators that have dealt with the highlighted characters.  This is not the time for initiation. 4)  What if I’ve moved on?  Yes, I was most certainly one of those people who took issue with the reorganization of the DCU.  I was nervous, distrustful, and upset.  Fast forward three years, past complaints, dropped books, and general ups and downs.  I wouldn’t say I have ‘embraced’ this current continuity, but I am living it, accepting of it, and I certainly enjoy it more than I did in the beginning.  Is it healthy to go back to something that I was forced to quit?  Like a habit or an ex-boyfriend, sometimes you have to move on and not look back.  A favorite character of mine, Daenerys Targaryen, says on occasion, ‘If I look back, I am lost.’  If I look back to the pre-New 52 timeline, I will be lost! Take a look at the graph.  This shows (more or less without scientific numbers), my general satisfaction (or dissatisfaction) at the current DC Comics direction.  As you can see, while New 52 had a rocky start and hasn’t exactly been consistent (but really, what run has!), it has been on the rise.  Isn’t this what DC would want?  Why go back to a happy time (pre-new 52) only to revisit a slippery slope (beginning of new 52) again? 5)  Frankly, I can’t handle it!  Maybe I’m weak!  Maybe I’m frightened at what I will do once I get to those two months and what happens after.  Maybe I’m scared my heart will be bruised or broken once more.  Part of me feels like it is a trap!  I am told I can read about characters once thought lost or not used in this present continuity.  At first I rejoice!  Yay!  I haven’t seen Cassandra Cain in forever!  Then I am saddened at the thought that I have her for two months, 44 pages.  I guess I can choose to love the character as they are for the time they are given to me, but am I strong enough for that?  They will be gone in an instant, and who knows when they are to return.

Well, that’s it; five reasons why Convergence is dangerous.  Of course, these are the musings of one person, one fan.  I know that not everyone will share my opinions, but I did want to at least put them out there.  Will I read convergence when it hits shelves this Spring?  Haha, of course!  I wouldn’t be much of a newscaster/TBU-phile if I didn’t, but that doesn’t mean I have to like it!

Gird your loins, my friends, and prepare for a heart-wrenching journey!  Caveat emptor!