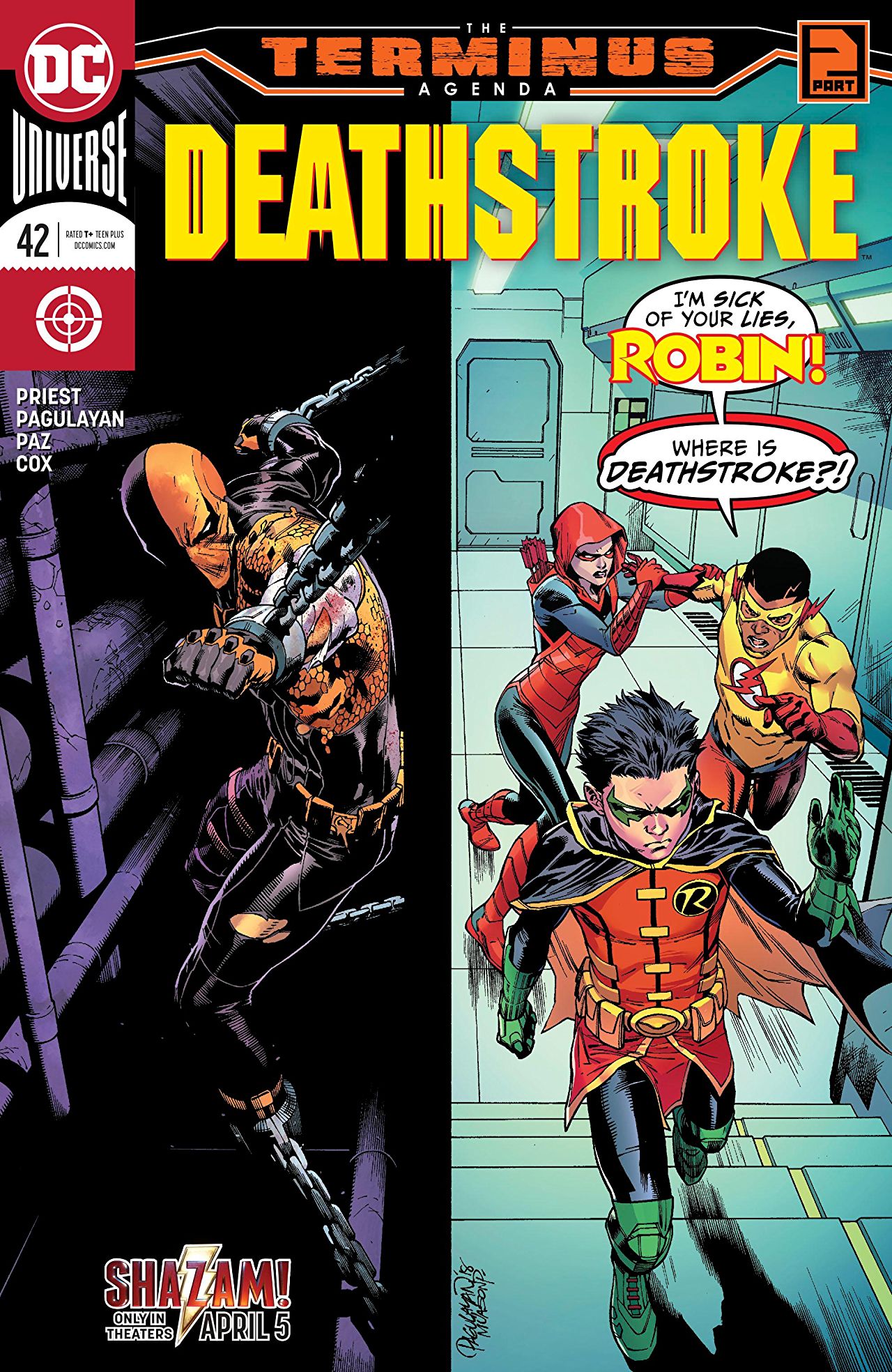 Overview: As the Teen Titans attempt to capture the supervillain Blackrock, Deathstroke forms his own plans…

Synopsis (spoilers ahead): In Robin’s secret prison for supervillains, Black Mask rambles about Deathstroke’s backstory to his fellow captive villains. Slade himself sleeps, suspended in his cell by a complicated rope trap. Mask wakes Slade up, offering freelance work if he helps them escape. Instead, Slade looks at the television screen Robin’s left in his line of sight displaying his many victims and mutters that the kid’s gone too far.

Joseph, Deathstroke’s only surviving son, talks to his boyfriend Terence, telling him about Slade’s history with Robin – through their first clash in Gotham, through the disasters of the Lazarus Contract, and in the conflict in Batman vs. Deathstroke. Terence asks if Joseph is bitter about Slade’s relationship with Robin, and that’s why Joseph helped the Teen Titans capture Slade. Joseph denies the claim, but checks up on his father through the nano-transmitter Hosun implanted which was revealed in the just concluded Arkham arc. Deathstroke breaks his own arm to get free, relying on his rapid healing to fix the limb, then uses the wires he was bound with to rig the lock. Rejecting his son’s help, Slade sets out into the prison.

In the Bronx, a man confesses to a priest, then ominously promises vengeance to the man he blames for his mother’s illness. However, the Teen Titans have formed a trap for the man – and each of them, Robin and Kid Flash receive communication from Slade criticizing and offering advice in their attempts to restrain him. He focuses on Robin and Kid Flash because of their past history, and as the man’s suicide bomb reveals him to be the supervillain Blacklock, the fight turns deadly for all around. Deathstroke wanders around the Teen Titans’ base, eating their food, ignoring his fellow prisoners, and giving more cynical advice and temptation to Robin.

Robin storms into his base, confronting the sandwich-munching Slade, who tells him he flinched, letting Kid Flash save Blacklock instead of choosing his fate himself. Robin challenges Slade to explain how he plans to fix Robin – and Slade replies that Robin is going to kill Slade.

Analysis: The crossover always presents a tricky prospect for a writer. Because they are deliberately appealing to an audience who hasn’t been reading the story up to this point, a significant amount of time must be spent recapping previous adventures or expositing elements of character motivation that would normally be left unsaid for longtime readers to intuit. However, unlike the last crossover, The Lazarus Contract, Priest does a much more effective job with his characters this time, using Slade and Joseph as his primary tools of exposition, and layering character and motivation with all of their speeches and explanations. In addition to the diabolical intelligence and weirdly poetic elements of Slade’s temptations of Robin and his heroes (“mach stem” is a nice motif for the destruction of lives caused by violence), Slade’s cynicism and contempt for the struggling anti-hero-wannabes provides intense elements of dry humor, making the more serious and less successful exposition by Wintergreen in the last crossover pale in comparison.

Priest also lays the groundwork for the next (and possibly final) arc, Deathstroke RIP, by having Slade propose that Robin kill him. Whether he intends actual death for himself, as we saw foreshadowed with the ex-assassin who kills himself in the last issue of Deathstroke, or merely to fix his problem with the connection between Slade Wilson and Deathstroke being made public by Commissioner Gordon, Slade’s plans promise intrigue and excitement.

Continuity note – Blackrock is another deep cut villain, typical of Priest’s tendency to pull from DC’s long history, seen recently in the New Challengers series, and before that, the Lois and Clark series spinning out of Convergence at the end of the New 52.

Main series artist Carlo Pagulayan returns for the cover and interiors this issue (also providing covers for the Teen Titans issues), and though a few of the panels seem a bit less carefully lined as most of Pagulayan’s intensely detailed norm, the issue is visually gorgeous. Inkers Jason Paz and Norm Rapmund provide clarity for Pagulayan’s pencils, and colorist Jeromy Cox gives the contrast between Slade’s shades of gray and the Teen Titans’ brightly colored world intelligence and depth. Francesco Mattina provides the variant cover in his digital painting style, making the choice between the main cover, with its clear visual design of Slade in black cut off from the heroes in light, and the variant with its garish and dramatic orange tones and lovely detail work a very difficult one.

Final Thoughts: Priest and Pagulayan join the Teen Titans crossover with a standout issue full of intelligence and hilarity.