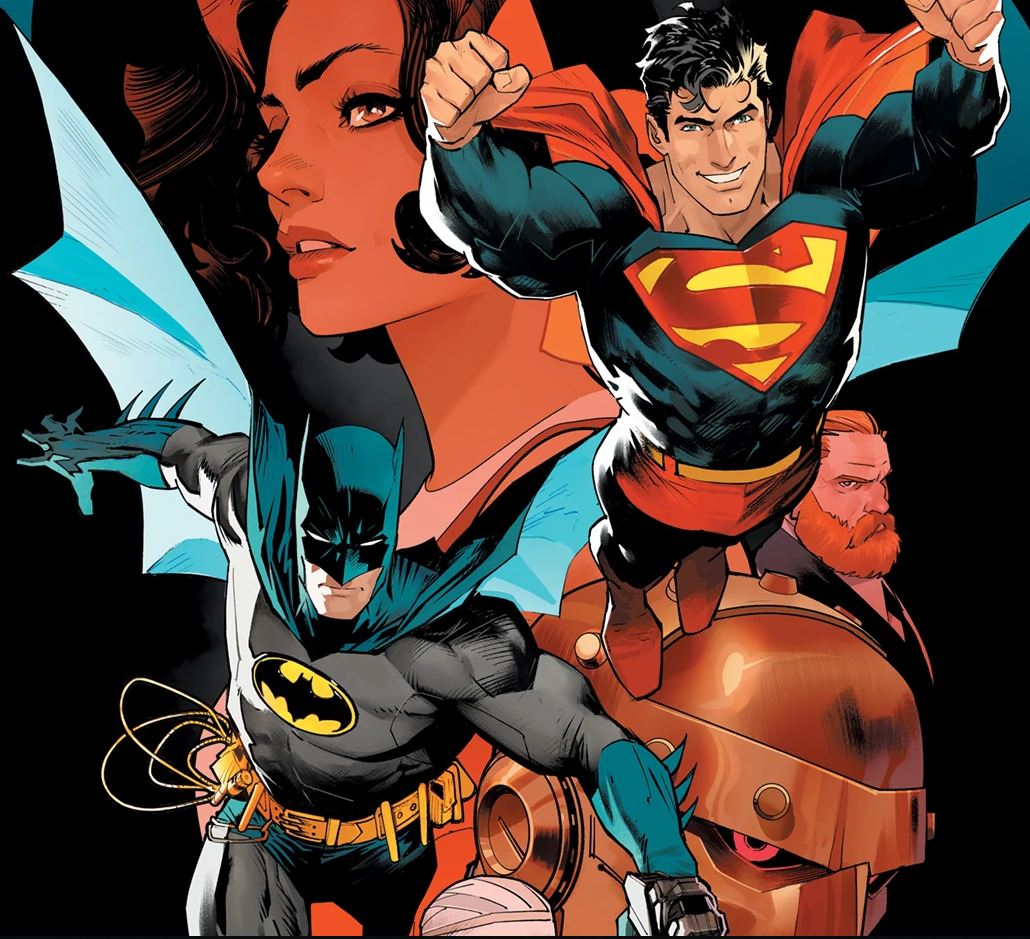 Overview: In Batman/Superman: World’s Finest #2, Batman and Superman battle Felix Faust while Robin and Supergirl travel back in time.

Synopsis (spoilers ahead): Batman/Superman: World’s Finest #2 begins at Caulder Mansion, as Robotman aids Dr. Caulder in performing surgery on Superman. As Dr. Caulder opens up Superman’s heart, the doctor screams for Negative Man. Superman only has minutes to live as the Kryptonite is toxifying his blood. Negative Man must use his radiation to purge Superman of his infection from within. As Negative Man gets to work, Batman pleads with Superman to stay strong and pull through.

Superman survives. Later, Batman, Robin, Superman, and the Doom Patrol talk about an artifact they recovered several weeks ago. It’s a sword from the Shang Dynasty, both Batman and Dr. Caulder surmise. The Doom Patrol notes that it belongs to a man named Nezha. Nezha died young, and his body was preserved, so his father, a warlord named Li Jing, could find a way to resurrect Nezha. Eventually, Li Jing found an elixir that would grant eternal life, having sacrificed his entire empire and wealth to learn about this elixir. When Nezha saw what price Li Jing paid to resurrect him, Nezha murdered his father.

Nezha then went about rebuilding the empire his father once had, slaughtering anyone who stood in his way. He came to be known as the Devil Nezha. Ultimately, magical warriors assembled together to imprison the Devil Nezha for eternity.

Superman, Batman, and Dr. Caulder guess that either the Devil Nezha is free, or some acolyte is using Nezha’s symbol and creating an army of supervillains to throw at the heroes. Dr. Caulder reveals that more heroes are under assault. The Flash, Wonder Woman, Green Lantern, and Billy Batson are all under assault from various foes. Batman decides that they need to split up. He sends Robin to find the House of Ji, the organization that imprisoned Nezha, and learn their secret to defeating this ancient villain. To accompany him, Superman calls in Supergirl.

Batman and Superman fly off to rescue Billy Batson while Caulder and the Doom Patrol locate the Devil Nezha.

In the Fawcett Neighborhood of Philadelphia, Felix Faust torments poor Billy. Before Faust can kill Billy, Superman saves the boy. Batman tries to disarm Faust, but Faust ensnares both Superman and Batman in a trap. Superman uses a high-pitched whistle to cause vertigo and paralyzing muscle cramps, which breaks Faust’s spell by making him lose his focus.

Elsewhere, Supergirl holds both the sword and Robin, and she flies fast enough to break the time barrier. She uses the sword’s tachyon trail to follow it to the right point in history. Unfortunately, when they meet up with the House of Ji, the magical warriors assume Supergirl and Robin are agents of the Devil Nezha (since they carry his sword).

Back in Philadelphia, Superman interrogates a disarmed Faust. Faust feigns defeat, getting the jump on the heroes by telling them that Nezha has imbued him with powers beyond their imagination. As the issue closes, Batman, Superman, and Billy Batson are surrounded by flames and hellish demons.

Analysis: This follow-up picks up right at the cliffhanger of the first issue wherein Superman was poisoned by Red Kryptonite. At Caulder Mansion, Superman is saved with a little help from the Doom Patrol. An amusing exchange between Batman and Dr. Niles Caulder reveals that there is a new (and ancient) villain most likely beyond this latest plot. This Devil Nezha character has allied a bunch of supervillains in an effort to conquer the planet, and one by one, they have been targeting DC’s most popular heroes.

A good third of this issue is devoted to Nezha’s backstory, and readers learn something of the tragic origin story of this new villain. After being resurrected by a mysterious elixir, Nezha murdered his own father in anger after learning that his father sacrificed their entire empire to save him.

From there, the heroes split up. Batman and Superman head to Philadelphia to save Billy Batson. It’s hard to gauge exactly when this story takes place, but it seems like nobody knows that Billy is secretly Shazam. Not even Felix Faust is aware of why he’s been sent to kill Billy. He’s just dutifully following orders from the Devil Nezha, in exchange for superpowers beyond his wildest dreams.

Robin and Supergirl team up. They travel back in time to learn how the original group of heroes locked Nezha away. The details on how and why Supergirl and Robin can “break the time barrier” and travel back to Ancient China are sketchy, but the less readers think about it, the better. This scene really hinges on readers knowing a little about Supergirl’s and Robin’s relationship, as they exchange biting banter as they travel together.

In the final panel, Superman, Batman, and Billy Batson appear to have been transported to Hell by Felix Faust. Dan Mora’s art in this panel (and really throughout this issue) absolutely glows. Tamra Bonvillain brings out an array of vibrant, exciting, and fun colors in Mora’s work, and Bonvillain does a great job separating the ancient past from the present in a way that makes readers question if other artists filled in the flashback sequences (they did not).

It’s a beautiful issue, but the reveal of this Devil Nezha character, his backstory, and his assembly of villains comes at readers at a dizzying pace. It’s difficult to keep track of the who, what, where, how, and why of this series, and creators Mark Waid and Dan Mora use these plot beats hurriedly to move on to the action. It’s not incomprehensible, but the plot stumbles just a bit in this issue over the previous one, and I would have appreciated maybe a little more explanation and less witty banter to help make sense of it all.

If it weren’t for Mora and Bonvillain elevating the visuals in this issue, Batman/Superman: World’s Finest #2 would be less fun of a read. Fortunately for this series, this issue could be one of the best-looking books on the shelves. It certainly is a glory to behold.

Batman/Superman: World’s Finest #2 is a phenomenal treat for the eyes, and it comes packaged with a dizzying plot that begs readers to just “roll with it.”