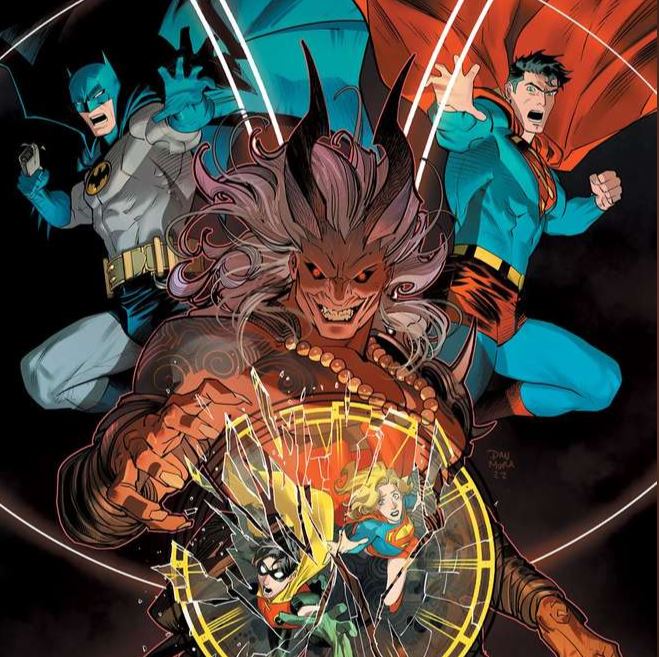 Overview: In Batman/Superman: World’s Finest #3, Batman and Superman find themselves pitted against the whole of the DC Universe, as a new foe, the Devil Nezha, controls both heroes and villains.

Synopsis (spoilers ahead): After their losing battle against a powered-up Felix Faust in Batman/Superman: World’s Finest #2, Batman and Billy Batson find themselves surrounded by demons in Hell. Batman calls out for Superman, who is just floating nearby. Batman demands Superman acts, but Superman shushes Batman. He’s concentrating.

Suddenly, Superman grabs one of Batman’s batarangs and flings it. The batarang hits Faust, which destroys the illusion of Hell. Superman tells Batman that all he had to do was listen for a fourth heartbeat. Problem solved.

As Batman carries a sleeping Billy Batson, he and Superman talk strategy. Billy wakes up and issues a threat that death awaits every superhero. Batman and Superman decide that their next step should be saving the other superheroes.

At Mont Blanc, Switzerland, the Doom Patrol is coming upon General Immortus’ fortress as they trek to find the Devil Nezha’s tomb. Inside, they don’t find the reception they were expecting. Instead, they’re greeted by a senile Methuselah who has no recognition of who they are. Rita Farr starts by asking Methuselah about Nezha, but she doesn’t get anywhere. Negative Man creates Nezha’s symbol in the sky, which triggers an emotional outburst from Methuselah. This proves fruitful, as the Doom Patrol learns that Nezha’s tomb is on a small island off the coast of Corto Maltese.

Back in Ancient China, Robin and Supergirl barely hold it together as they’re attacked by the Warriors of Ji, the original group who locked Nezha away. Robin tries dropping Nezha’s sword as a show of peace. That doesn’t work, and Supergirl is about to be crushed by overwhelming magic when Robin begs and pleads their case.

The Warriors of Ji stop long enough for Robin to explain the situation that they’re time travelers looking to lock the Devil Nezha away once more. The Warriors tell Robin and Supergirl of an island where a magic tomb was built. For five days and five nights, the Warriors of Ji battled Nezha, forcing him into the tomb. Eventually, they knocked him inside, and then they struggled to seal the entrance.

Back in the present, Superman carries Batman to Central City. They’re going to split up to find the Flash and Wonder Woman. Superman finds Flash too late, as Flash dives into a trap mirror placed by Mirror Master. Batman, meanwhile, finds Wonder Woman transformed into a clay statue at the hands of Dr. Alchemy.

Superman ties up Mirror Master, but suddenly a magic mirror appears and chases the Man of Steel away. Batman draws Dr. Alchemy’s fire, timing it, so it blasts the mirror and frees up Superman. After the duo have dispatched the villains, Green Lantern (Hal Jordan) appears. Hal traps Batman and Superman, informing them that the Devil Nezha has started using superheroes to do his dirty work.

Batman calls into Alfred to ask if anyone has accessed the Justice League files, as he finds it bewildering that Nezha would know so much about who the major superheroes and supervillains are. Though Batman doesn’t know it yet, Alfred, too, has been compromised by Nezha, who stands triumphant in the Batcave.

Analysis: Batman/Superman: World’s Finest #3 is a classic, edge-of-your-seat, pulse-pounding thrill ride. Now that the setup has been laid out in the previous two issues, this third chapter juggles three storylines wherein each team of heroes tracks down different MacGuffins in order to stop the new big bad of the DC Universe, the Devil Nezha. This parallel team format works well for this book, hopping between groups just as the action is about to slow down, which keeps the pace of the issue kicked into high gear.

What results is a safari of colorful cameos, both of all-star DC names and lesser-known characters, and a relentless adventure that feels both antiquated and oddly refreshing in light of the grim, character-driven tones of many of the DC books on the shelves right now. And that’s why Batman/Superman: World’s Finest #3 works so well. The other DC books out right now are very dramatic (let’s be real – it’s because most of them are Batman books), and this is a fast-paced action book that keeps the tone light and upbeat.

Much of this upbeat tone can be attributed to artist Dan Mora, who provides incredibly beautiful and awe-inspiring paneling and linework. Tamra Bonvillain aids Mora in the coloring department, and Bonvillain gives this issue a glow that feels reminiscent of The Superfriends or the mid-00s Justice League animated show. Credit where credit is due, Mora and Bonvillain let loose and deliver a variety of locales that feel distinct from one another, which adds to the size and scope of this grand adventure. Aditya Bidikar also deserves praise, as Aditya’s lettering provides the right punches throughout World’s Finest #3 in both delivery and in making those different locales visited by the heroes feel unique from one another.

When reading this book, one gets the sense that everyone is firing on all cylinders and that there’s a general love for this series. And why wouldn’t anyone love it? World’s Finest #3 truly is a celebration of DC’s cavalcade of characters, both old and new. It’s much-needed levity and escapism in a time of worldwide turmoil.

Batman/Superman: World’s Finest #3 is best-described as a theme park thrill ride that takes readers on a tour of the DC Universe, and it totally works.