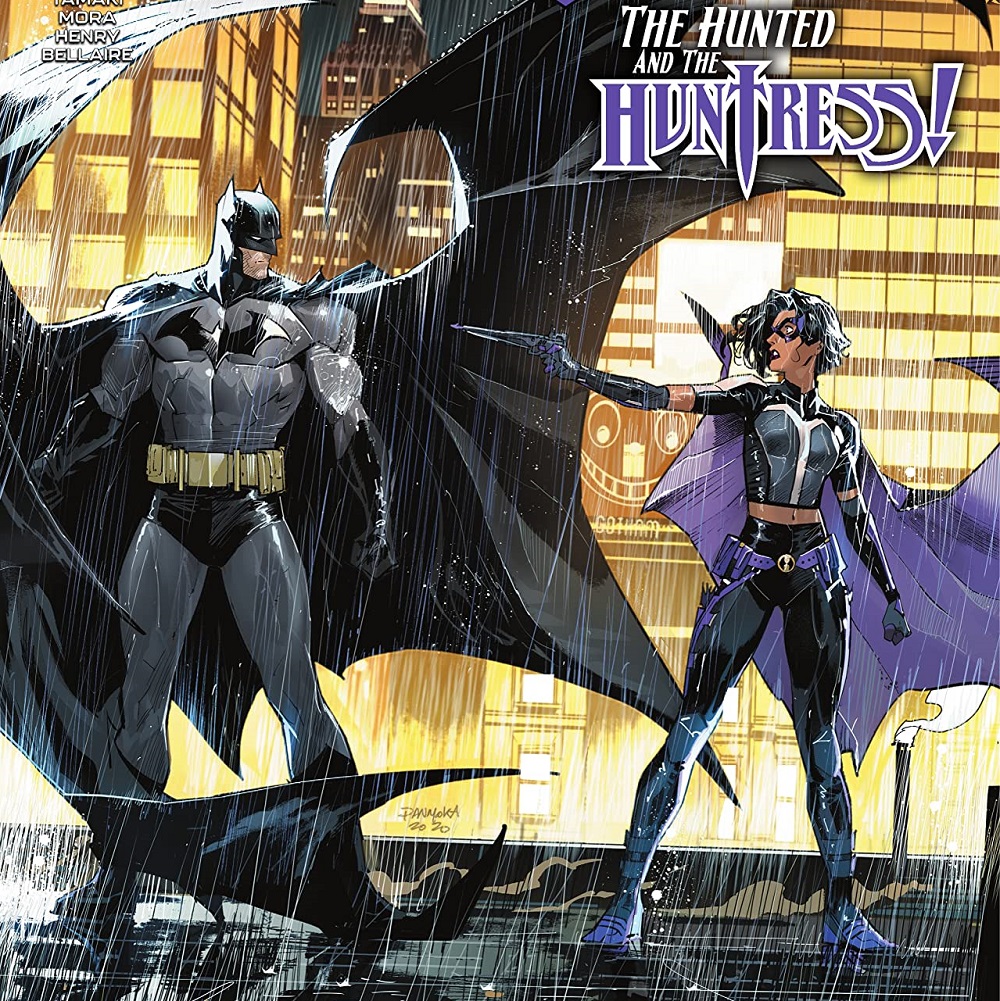 Synopsis: Detective Comics #1036 being with Bruce’s neighbor, Lydia, seeing a glimpse of him carrying the body of presumably Sarah Worth into his house. She chases after them but is unable to catch up as Bruce locks his door. She bangs on the door demanding that he opens it, threatening to call the cops. Inside, “Sarah” begs for help as she begins to deform and shift in shape into Clayface. There’s more knocking on the door as the GCPD has arrived due to Lydia’s call. Bruce invites them in to search the home. Finding nothing incriminating and no body, the officers leave and a still upset Lydia follows.

Walking the streets in the City Hall District, two guys who appear to be members of the Banenito gang stroll the streets at the request of the Penguin. Suddenly someone jumps at them from a dark alley. While this is happening, Bruce stands atop a roof in Gotham’s skyline, holding the bag with “Clayface” inside. He pulls on his cowl as he realizes that he isn’t alone. Huntress is there, pointing her crossbow at him, wanting to make sure Batman is Batman after hearing the news of Sarah Worth’s death. As they talk, “Clayface” oozes out of the bag, sliding off the roof before eventually heading towards the sewers. After a brief tussle, they catch up with not Clayface, but Sondra Fuller – Lady Clayface. Batman takes Fuller and Huntress to one of the underground caves, where Fuller tells of how she witnessed the death of Sarah Worth at the hands of “Kneel” (Neil, Mayor Nakano’s assistant). Batman puts a trace on Neil’s cell phone.

At City Hall, Mr. Worth confronts Mayor Nakano over the lack of action in finding his daughter’s murderer (and the fact that the crime scene has been filled with concrete). He promises to end Nakano if answers don’t come soon. On the other side of town, Penguin’s goons have brought him the guy who attacked them earlier from the alley. There’s something terribly wrong with him; something in his eyes…

Batman and Huntress have located Neil on the roof of a building. Before they can get answers, Neil lets out a loud scream and dies. There’s something wrong; something in his eyes. As Bruce talks to Helena, they realize that Neil’s hands are covered in blood. It isn’t his, so who can it be…?

Deb Donovan walks out of her home. She’s immediately overcome with shock. On the sidewalk lies the body of her neighbor… Lydia.

Analysis: I want to go on record and say this first. Right now, Detective Comics is the best Bat book out there. I say this with true conviction. But I also say this as someone who wasn’t sure what Mariko Tamaki’s run would bring us (two words: Mr. Teeth). But I am a true believer. What readers have been given in the last three issues is some great plotting work as Tamaki keeps her Batman story tightly knitted with the universe with an extra, but well-welcomed caveat. By presenting a story that focuses a lot on the new life of Bruce Wayne, Tamaki is giving readers a story that has long been missed and she proves one thing – it is possible to still tell a Batman story including Bruce Wayne in something other than playboy mode.

As this story arc began, with got bits and pieces of Helena Bertinelli’s Huntress (including Dan Mora’s cover in #1034). In the last issue, we got a backup story featuring her as she suffered the loss of a friend. Her investigation now brings her into the main story in Detective Comics #1036 (with more to follow in the backup story below). It was done really well. I have always been one to say that Batman needs to have Robin at his side and was hoping to get it when it was announced that Peter Tomasi would take the reigns of Tec a few years ago. Of course, that didn’t happen. However, in this issue, as well as in Batman, we have seen Batman have some decent partners at his side, primarily due to the voices given to those characters by the respective writers (jury’s still out on Ghostmaker). The same is happening here. As we first saw in the backup story in the last issue and here, Tamaki has a decent grasp of Huntress’ character and presents her as the no-nonsense, strong character we know her to be. One thing I’m not certain of, however, is whether or not Helena has been aged down some or if it’s Mora’s style of drawing. I’m thinking that it is the former and Huntress might be a year or so younger than when she last appeared in Batgirl and the Birds of Prey. I’d also gladly accept if I’m wrong and it’s simply Mora’s art.

It was also a nice touch seeing Tamaki bring back Lady Clayface into the story, particularly the swerve in making readers initially believe it was Clayface himself. Sondra Fuller hasn’t been seen since the pages of Gotham City Monsters. It will be interesting to see if they address the events leading to her return to Arkham after it seemed she had turned her life around at the end of Gotham City Monsters.

The worse thing about Detective Comics #1036 is that this is Dan Mora’s last issue for the next few issues. While we will continue to see his covers, his interiors artwork that we have been getting since the story in Joker War Zone is going away as Detective begins to go on a double shipping schedule. It will be greatly missed as he and Tamaki make a great creative team (along with Jordie Bellaire’s colors).

Synopsis: As the backup in Detective Comics #1036 begins, Huntress stands inside the home of Mary Knox, her friend who was murdered in the last issue. Helena scours through the apartment looking for information or evidence until she eventually finds info on Mary’s ex-boyfriend. She also finds evidence of domestic abuse and that he had three credit cards in Mary’s name that he was using for his own personal benefit. Huntress makes her way to his apartment, where she confronts him about his whereabouts on the night of Mary’s death. He, however, isn’t going to cooperate. He pulls a gun and fires, missing Huntress. She in turn places a crossbow bolt into each shoulder, pinning him to his armchair. The ex produces an alibi, a plane ticket bought on one of the credit cards in Mary’s name. Huntress leaves, but not before promising to make his life miserable for what he did to Mary. She keeps this promise by contacting Oracle. She wants the guy put away for credit card fraud.

Helena returns home to find Doug, Mary’s cat, waiting on her. She fixes him dinner and tells him that the ex isn’t the culprit in Mary’s death. But she promises she is not giving up.

Analysis: I have one main issue with this story – it should have appeared in the last issue. I would imagine that before the second part of the Robin was placed in the back of Detective Comics #1034, we would have gotten this last issue. So seeing the second part of a story that seemed to have already been wrapped up in the previous story kind of thrown things out of whack. Other than that, this was a well-thought-out story to close out Huntress’s story to thrust her into the main story. As I mentioned in the analysis of the main story, Tamaki has a good grasp of Helena’s character and we see it especially here as Huntress is the main focus of the story.

Clayton Henry’s art is pretty good, but I believe what has been the true, consistent star has been the colors from Jordie Bellaire. Despite styles that are quite different between Henry and Dan Mora, Bellaire’s colors have been so consistent between the two stories, that the differences in art styles are more subtle than they are apparent.

Finally, there seems to be one editorial faux pas. In one panel when Helena is questioning Mary’s ex, she asks him where he was “six days ago.” In a subsequent panel, the ex-boyfriend asks, “two days ago?” Gotta do better next time, editorial.

Tamaki's use of Bruce Wayne alongside Batman has been a welcomed change to Batman comics. Detective Comics' connection to the main Batman book has also continued to bring the universe together. Now that Huntress has been fully integrated into the main story, it can only mean some fun adventures between her and Batman for the remainder of the arc. Overall, this issue is better than a four, but less than a four and a half. It is that good.