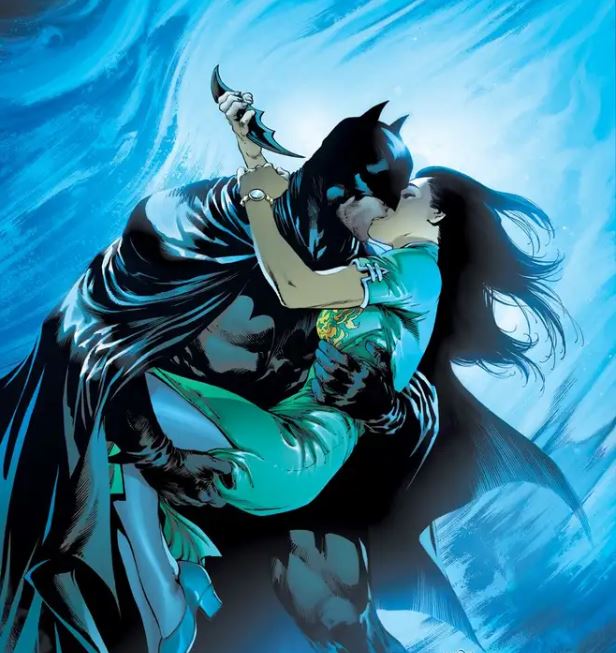 Overview: In Detective Comics #1061, Mariko Tamaki finishes her run on the title, which sees the conclusion of her Riddler story arc.

Story #1: “Riddle Me This, Finale” by writers Mariko Tamaki and Nadia Shammas and artist Ivan Reis

Synopsis: As Detective Comics #1061 begins, Talia al Ghul confronts Riddler about the recent events involving the Citizen Criminals, revealing her involvement in giving Riddler information on Deb and Caroline Donovan. Riddler asks Talia if she wants to stay for the upcoming episodes. Talia declines, stating that she has other business to deal with.

Batman confronts Caroline Donovan, asking her how she got entangled with everything. We flashback one month earlier when Caroline attends a group session at Arkham Tower led by Chase Meridian. The group consists of all of the other Citizen Criminals, including Sarah Pet, the sister of Dr. Wear. Dr. Meridian convinces the group to own up to their past – a past that includes the fact that they each committed a crime that they had not paid for. Deb Donovan arrives at the scene and attempts to talk to her daughter. A smoke bomb goes off, allowing the younger Donovan to get away.

Batman and Batgirl (Cassandra Cain) arrive at the Gotham Harbor where they find Caroline Donovan and Chase Meridian tied up on a scale of a Lady Justice statue. A speaker plays the Riddler’s voice. He tells how the two are connected and how their corruption failed Gotham. Batman and Batgirl go in for the save, but not before Batman is warned to not touch the scales.

Batgirl saves Dr. Meridian while Batman moves in and grabs Caroline as the scales fall into the harbor. He tells her how the Riddler used her, but the judge is at peace. In fact, this is the most peace she has felt in a while. Pulling the trigger and killing Perry will allow her to be at peace. The Riddler was correct, she says. If you want justice, you have to take it into your own hands. She knees Batman in the chin and falls into the harbor below. The GCPD is unable to find her body.

Batman attempts to comfort the grieving Deb Donovan, but she is finding her own comfort in the bottle of alcohol she’s holding. Batman says he will be there for her if she needs him.

Back at the new NEW Batcave, Bruce realizes he’s not alone. It’s Talia. Bruce reveals that he knows of her connection with handing over the Donovans to Riddler. He also tells her that he knows she was the one spying on him the night he took Caroline to dinner. Talia explained that she did that for personal reasons as she couldn’t believe he would go on a date with her. Then again, he does have a type. She leaves her beloved alone.

Analysis: What a disappointing way to end what was an absolutely great run. I’ve said from the start that this arc needed to be longer to truly flesh things out. I don’t feel any different with this final part. While some things are answered, others were not. In fact, I found myself more confused than anything on some matters. First, is Chase Meridian a villain in this? After the voice she had in Shadows of the Bat, Tamaki and Shammas treat her as no better than the late Tobias Wear in doing undercover, seemingly corrupt things (which is also completely different than the voice she’s given in the backup story to come). What is it with the whole “that voice” line? Did Caroline recognize Batman as Bruce? Why does Talia seem so dense that she would think that Bruce is actually interested in her compared to just using her to solve the case she was involved in? The voices across the board just seem off.

I will carry the opinion that the majority of the script was done by Shammas and not Tamaki (change my mind if you can). The characters’ voices were not in the usual style we’ve seen from Tamaki in the past. Overall, I am happy this arc is over, but I am equally highly disappointed that this is how her run comes to an end with Detective Comics #1061. I wish things had ended when Tamaki finished Shadows of the Bat.

I am also sad in seeing Ivan Reis leave the book as well. After Dan Mora, his pencils have been a breath of fresh air in the pages of Detective Comics.

Synopsis: As the backup in Detective Comics #1061 begins, Gotham Girl flies out of the window carrying Chase Meridian but is pulled back in by Huntress. Huntress attempts to subdue Gotham Girl with a tranquilizer cocktail but to no avail. As Claire turns her attention back to Chase Meridian, the doctor asks why Claire wants her dead. Gotham Girl tells her of the information that she found on Andre’s laptop that implicated her in some cruel mental health tactics. Chase swears it wasn’t her. But now they know who.

Claire, Dr. Meridian, and Huntress confront Dr. Rea, who admits to using Chase’s computer to conduct her cruel tactics that eventually cost Andre his life. Dr. Rea isn’t concerned until it’s revealed that Oracle has been listening in and that she has all the evidence needed to bring Margot Rea down. The disgraced doctor tells them where the project is being conducted. Before leaving, Claire gets little revenge of her own. She eventually flies high enough to where the lack of oxygen causes Rea to black out and crash back to the ground.

Back at Wayne Manor, Claire finds Huntress waiting on her. Being a former patient at Arkham Tower, Helena understands what’s going through Claire’s head. Huntress explains the importance of connection and tells her this is likely what Andre was trying to do with her – connect.

Claire doesn’t realize it, but she’s being watched. Talia al Ghul is looking for a Superman of her own. And she needs to try harder to push Claire over the edge to become just that.

To be continued in Batman vs. Robin.

Analysis: This backup story in Detective Comics #1061 turns out to be nothing more than a setup for the upcoming Mark Waid series, Batman vs. Robin. I truly wanted to enjoy it. While this finale was better than the first two parts, put together, the whole thing falls flat simply for the nature in which it sets up the Waid series. Make no mistake, Mark Waid has a special place in my heart for writing Kingdom Come. However, I have zero interest in another father vs. son series. Sina Grace’s backup doesn’t change it. Had it ended with the focus of Claire acknowledging the advice from Helena, I believe I would have enjoyed it more. The Talia reveal ruined it.

I wanted to end this review of Detective Comics #1061 by giving some final thoughts on Mariko Tamaki’s run on Detective Comics. I became the reviewer of this title over two years ago during the run of Peter J. Tomasi. I was very excited when he was announced as the main writer on the title considering my love of his work on Batman & Robin and more recently Super Sons. Needless to say that by the time that run was over, I was pretty underwhelmed and disappointed. I wasn’t sure how I felt about Mariko Tamaki being announced as the new writer either. No doubt, I enjoyed the majority of the stuff she had written, particularly her writing of She-Hulk at Marvel. I missed out on reading her run on Wonder Woman but heard good things about it. My concern, however, for Batman and Detective Comics came in a short story she did feature Mr. Teeth. For a lack of better words, it was bad (and scary).

Detective Comics #1034 was released on March 22, 2021, and ooh boy, it didn’t take me long to become hooked. Not only did we get great art from Dan Mora, but we got a great story. That first arc, The Neighborhood, gave readers something we hadn’t had in a while. We got a Batman story, starring Bruce Wayne. It was amazing how little we saw of the cape and the cowl but how enjoyable the story was. We also got Huntress’ return, which made things better. I don’t want to take away from the job James Tynion IV did in unifying the Bat-writers’ room in giving Bat-readers a truer universe in Gotham. However, of all the writers of Gotham during this time, Tamaki had the best handle on the voices of the characters she wrote in the pages of Detective. For this reader, Detective Comics quickly became the best Bat-book on the shelf, and it remained there until this last arc.

I preferred if Shadows of the Bat would have been the end of Tamaki’s run. It would have allowed her to go out with a bang. As mentioned in the analysis, everything seemed so rushed. We received a finish without receiving a real finish. It was a disservice to readers and Tamaki and not what we received from Tamaki in her other arcs. That’s truly unfortunate.

That being said, I want to thank Mariko Tamaki for breathing new life into the original Batman comic book. It was greatly needed after having a decent run during Rebirth. I look forward to reading what comes from Ram V as he takes the reigns of Detective Comics. Considering the work he did on Catwoman, I have no doubt he will do a great job. But boy, will Mariko Tamaki be missed.

This Riddler arc ends with a whimper, and it's ill-fitting of writer Mariko Tamaki, who gave this title such a breath of fresh air in previous arcs.