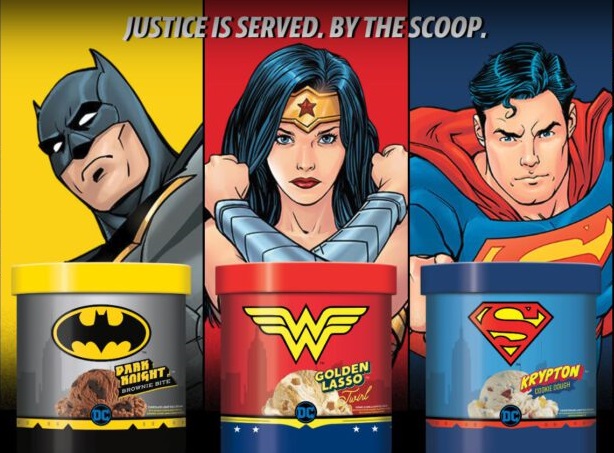 Overview: Back in 2018, Edy’s Ice Cream introduced three unique flavors themed around the trinity from DC Comics. A year later, they expanded the line to include two new flavors in honor of the Year of the Villain promotion DC was running at the time. Today, we give a taste (pun intended) of something a bit different as we take a look at the comics featured on the containers of ice cream featuring Batman, Joker, Harley Quinn, and more.

Part 1: Wonder Woman battles mercenaries in the lost Egyptian Athenian Temple for the twin gems of Wisdom and Nature, but Cheetah steals them while Diana Prince is distracted.

Part 2: The two gems strengthen Cheetah’s powers and mind, giving her an idea of how to defeat Wonder Woman.

Part 3: As she flees Diana, Cheetah chants a Greek spell, causing the gems to flare with magic just as Wonder Woman grabs the villain’s arm.

Part 4: The gems have disappeared, and Wonder Woman uses her Lasso of Truth to compel an answer from Cheetah. The villain confesses that she sent the gems to hurt Diana’s dear friends in the Justice League as she is led away by the authorities.

Part 1: As Lex Luthor watches a video of Superman defeating Zod, he plans his next move after manipulating the two Kryptonians into fighting. Using the Gem of Wisdom from the Cheetah, he plans to take on Superman directly.

Part 2: Superman is on alert after Wonder Woman’s warning, but Lex flies behind him and attacks.

Part 3: As Lex attacks with superpowers that mimic Superman’s, he boasts that he can finally match Superman’s unearned powers, causing Superman to realize how to beat his foe.

Part 4: Superman tells Lex that his powers are a shortcut, while Superman trains to be worthy in his Fortress. Lex admits that Superman is right, and the Man of Steel uses his heat vision to break the magic gem, removing Lex’s power as well. As the comic ends, Superman wonders how Batman is doing with his gem.

Part 1: Jim Gordon radios Batman from his car about Two-Face’s attack on the Gotham City Museum of Finance’s Two-Dollar Bill Exhibit, as the Caped Crusader faces his former friend.

Part 2: Two-Face has duplicated himself with the Gem of Nature, and Batman says he’s been expecting it since Wonder Woman and Superman’s warnings.

Part 3: Batman asks the two Harvey Dents how they decide with only one coin, and the villain turns to fight his duplicate.

Part 4: As one Two-Face strikes the other, the Gem of Nature flies from their grasp, and Batman crushes it under his boot. He explains to the defeated Two-Face that the gem magnifies the holder’s true nature, and nothing would change if he used it.

Part 1: In the Joker’s Lair, the Clown Prince of Crime seems very ill, so Harley eagerly plans her own night out.

Part 2: Harley changes the Bat-signal into a Harley-signal, leading the Joker to comment on her lack of originality from his bed. The police chase Harley, asking where the Joker is, causing Harley to claim to be more than just a sidekick. She starts spraying mysterious gas.

Part 3: Joker observes the strange mist, appreciating Harley’s theatricality, and it appears that Harley’s gas has transformed all the women it touches into copies of herself.

Part 4: Back at Joker’s lair, Harley returns, as Joker turns off the TV reporting that the duplicate Harley Quinns reverted back to normal without permanent damage. Joker tells Harley that he was never sick, that he was just testing her. Harley hands him a large bouquet of flowers, which he appreciates, but then he notices the blooms are burning as Harley smiles.

Unlike similar food-marketed comic ephemera like the General Mills Justice League comics of 2017 or the Batman v Superman cereal comics in 2016, we were unable to track down any creator credits for these comics, though they have a very similar art style across the sixteen pages released. Both of the cereal comics series focused heavily on telling stories with a clear connection to a child’s perspective, as effective (if perhaps puzzling, given the films they were attached to) marketing for kids who want to see themselves interacting with these heroes. By contrast, the ice cream comics are straightforward comics highlighting each character performing characteristic actions, usually against one of their most iconic foes (Cheetah, Lex Luthor, and Two-Face).

Technically, the comics also follow a different path than the cereal box comics – while the cereal box comics deliberately kept their panel counts low (hovering between one and three panels per page, generally, compared to a standard comic’s four to six panels per page), these pages swerve between really basic formatting (one or two panels, just enough to provide one striking image or one striking contrast), and very complex formatting seen most in the Joker/Harley Quinn comics, which utilize small in-set panels to provide multiple locations and commentary, something not seen at all in the cereal box comics. Additionally, while the generally simplistic panel structures provide fairly straightforward action, the dialogue hints at a lot more complexity, forcing a reader to create a lot of connections between each page – an interesting exercise in what Scott McCloud calls “closure” – what your brain does between panels (in his magisterial book Understanding Comics – highly recommended!). It’s also interesting to note that the Joker/Harley comic does not connect to the Justice League overarching storyline, even though Harley turning many women into copies of herself seems similar to what Two-Face does in the Batman comic.

A few notes on continuity: as these comics were released from 2018 to 2019, it’s likely that they are supposed to be considered in Rebirth continuity (though, of course, nothing that happens in them requires any connection or knowledge of past continuity. Batman is wearing his Rebirth suit, appropriate given the time this was released, before Tom King shifted Batman back to the Hush suit from 2003 following the wedding. Jim Gordon has red hair, consistent with his de-aging in the New 52 (and not consistent with the gaining of years seen in Infinite Frontier’s Joker title). A very strange Two-Face design with hair and facial features not generally seen. Harley is in her n52/Rebirth outfit (also seen in the cartoon), with blonde hair and colored pigtails, rather than fully colored hair. Superman is shown with a red belt, no briefs, but a yellow belt buckle and red boots, unlike the Rebirth design. It might be the late n52 design, actually – not the dreadful Jim Lee armor design, but the pretty solid costume that came later. Wonder Woman seems to have her movie-inspired Rebirth design, with a blue leather skirt and gold rather than silver trim and the Liam Sharp Cheetah design.

Thanks to The Yeti Speaks! for the images of the original twelve comics, and some eBay listings, retailer images, and other fans for the later four. Thanks also to our Discord community member Borvoc, who first informed me of the existence of these ice cream comics from Edy’s and Dreyer’s!