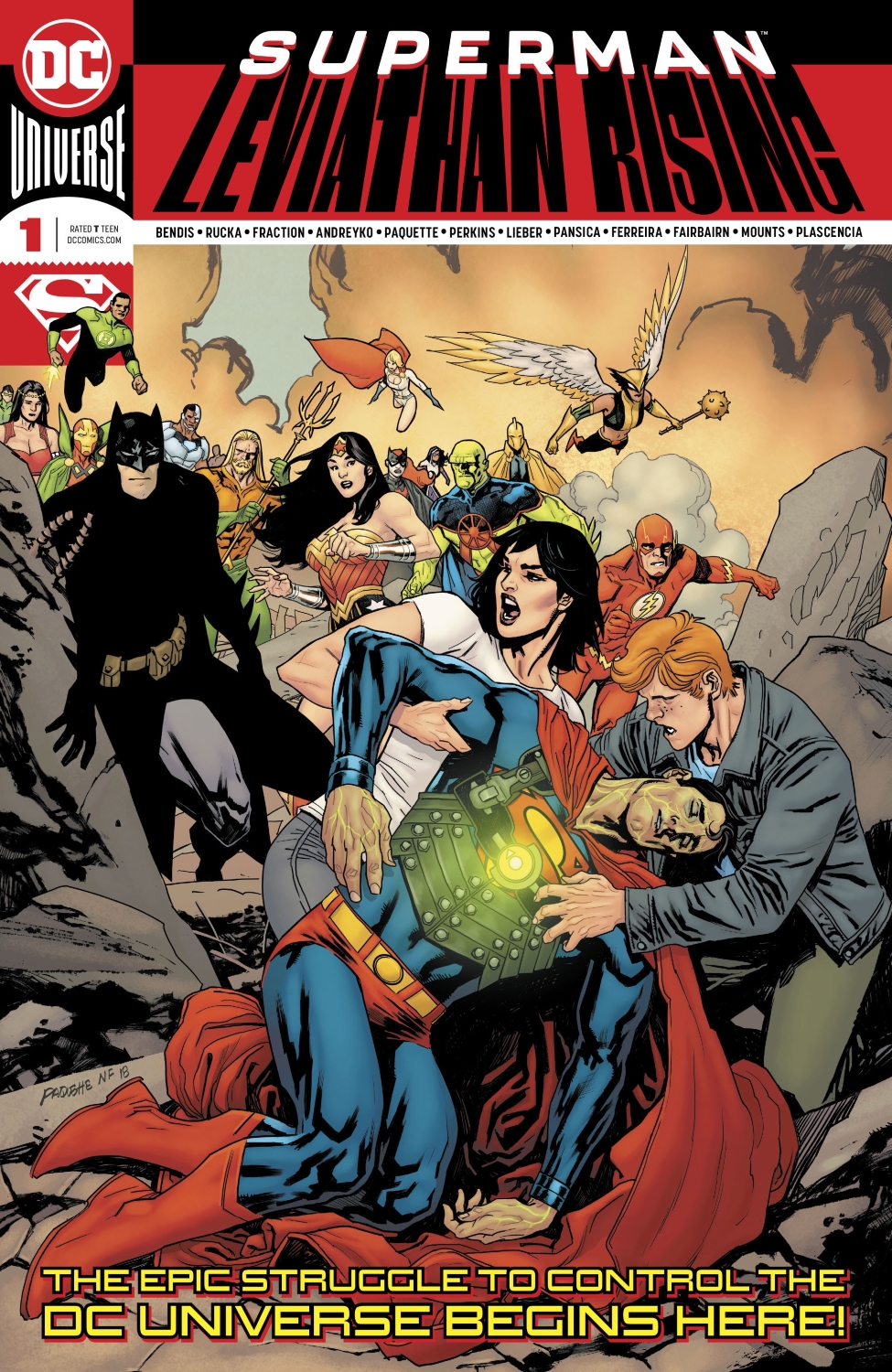 Overview: As dark forces gather around him, Superman decides to allow himself to be kidnapped…with unexpected results!

Editor’s Note: This issue, while mainly Superman focused, is the first title that TBU will cover for the Event Leviathan story. However, if you haven’t been following along in other DC Universe titles up to this point, you may be unaware that the story actually started in the Action Comics months ago. This review will also include a brief description of everything that has happened to the lead up to Event Leviathan. So while the rating and most of the analysis will be on this issue, get yourself up to date with everything before Event Leviathan officially launches in a few weeks. Spoilers are sure to be revealed.

Summary of Action Comics: Leviathan Rising (#1007-1011): Someone has been taking out the various clandestine organizations of the DC Universe: Kobra, Argus, the DEO, and Spyral, in an operation Amanda Waller calls a “Royal Flush”.

Lois Lane, having told her father, General Sam Lane (attached to Argus) the truth about her husband’s identity, and Superman start poking at the edges of these disasters when Amanda Waller tells them that someone or something named “Leviathan” is behind it all. Numerous heroes, including the Question, Adam Strange, Kate Spencer (Manhunter), Agent 0 (Tiger), Golden Guardian (Jim Harper), and Huntress (Helena Bertinelli) are pulled into the mysterious attacks, which Superman suspects may be teleportation rather than destruction, but no one knows for sure.

Summary of Year of the Villain #1: Chapter 2: The villain Merlyn battles Batgirl and Green Arrow, desperately running from Leviathan’s Royal Flush taking out the League of Assassins. They are too late, and everything goes bright, then black. Batgirl wakes up tied to a chair, with a mysterious masked and armored figure giving her an offer to join him. Meanwhile, Robin (Damian Wayne) approaches his father, Batman, asking him to help investigate Red Hood and a potential connection to Leviathan.

Summary of Superman: Leviathan Rising: In Metropolis, Ms. Leone, the leader of the Invisible Mafia, is approached by a man with a sophisticated electronic disguise in a bookshop. Leone resents not knowing her interlocutor, but she guesses correctly that he is Leviathan, though she wrongly assumes he has come to destroy her like he’s destroyed all of the other intelligence organizations. Instead, he asks if she has any ways to destroy Superman, though neither of them says any names that might alert his superhearing. Leone observes that so many people try to take Superman down, but their own need to be seen doing it cripples their plans. She says Superman is just a broken alien boy, feeling alone, and to break him, you just need to take away the people he loves. Leviathan suggests Lois, but Leone scoffs at him since everyone tries that tactic, and everyone fails.

Leone tells Leviathan that just because Lois has no powers doesn’t change the fact that she’s one of the most dangerous women in the world, because of her reporting skills, connections, and access. She then says that no one yet knows how to actually kill Superman, and Leviathan takes his leave, thanking Leone for helping him think through the issue.

Superman, after defeating a supervillain, zooms to Lois’s hotel room in Chicago, telling her that a team is waiting in his apartment to kidnap him. Clark decides to let himself be kidnapped to find out the motivation, though he’s not pleased when Lois tells him that he sucks at acting.

In his apartment, Clark pretends to take no notice of the three operatives and then fakes a reaction to their electric prods.

In an underground room, Talia Al Ghul reveals herself as his kidnapper, who tells him he’s bait for Superman. Her men then buckle a Kryptonite vest onto him, to disable Superman when he comes, then leaves him alone…as the Kryptonite poisons him.

That night, Lois types away then goes to bed. She can’t reach Clark, either through his superhearing or by phone. After a text exchange with Jimmy, she sleeps. The next morning, she goes to the Kent apartment in Metropolis. Deeply unsettled by what she finds, she calls Batman that night, smoking to calm her nerves. Though the Dark Knight is skeptical of her concern, he investigates the apartment and agrees. Wonder Woman also arrives, and the two Justice Leaguers promise to find Superman…though Lois says they need to be looking for Clark instead.

Meanwhile, Jimmy wakes up naked and perhaps married to a strange beautiful woman named Jix in Gorilla City. She reveals herself to be an interdimensional gem thief, jumps out the window, telling him to take care of the cat she found and left in the bathroom. The cat has destroyed his clothes and proceeds to viciously attack him, then vomit red fluid in enormous quantities all over the hotel room. Jimmy desperately texts Lois (as seen in the previous section), and when he can’t get help from her quarter, dashes out of the hotel to save Superman (as he’s not responding to Jimmy’s special watch signal).

In National City, Supergirl arrives at the utterly destroyed apartment building where she and her DEO agent “family”, the Danvers, lived. Flashing back three months, while she was in space, Eliza and Jeremiah Danvers fought over Eliza’s distrust of Bones and Jeremiah’s continuing loyalty.  She finds Jeremiah’s wedding band (part of his cover, but also a symbol of affection he truly had for Eliza). Another flashback shows him leaving Eliza, then later Eliza being exploded like all of the other intelligence agents, along with the apartment by a huge armored figure. As Supergirl continues scanning the scene with her supervision, Kate Spencer, Manhunter, observes from a distance, as Kara finds a note telling her about Leviathan.

As Clark suffers from Kryptonite poisoning, Leviathan arrives and removes the vest killing him, then leaves. The poison takes a while to fade, and before he can break free, Lois (dressed in a similar dress to Talia), Jimmy (in a gorilla costume), Firestorm, and the cat (who turned out to be a Red Lantern) burst in to save him. Lois frees him, as Firestorm and the Cat Lantern fight the Leviathan goons outside. She gives him his costume, and he pursues Levithan, but the ship uses the teleportation effect seen in the previous arc, vanishing.

Leviathan faces Talia on the ship, far away in the mountains. She wanted to take control of her organization back from him, but he intended to convince Superman and the Justice League to join him, instead of destroying them. He pushes Talia out of the ship, letting her fall to her presumed death…but Superman catches her. She thanks him, but refuses to give him any more information about Leviathan.

At night in Metropolis, Leone has Red Cloud kill her security supervisor for his failure in letting Leviathan approach her. Leone and Robinson Goode team up, and determine to find out who Leviathan is so that he doesn’t get in the way of the Invisible Mafia’s plans.

The comic closes on an image of Lois at the Daily Planet, typing up her report of the adventure…

Analysis: Brian Michael Bendis, former star writer for Marvel, has decided to build to his first major event miniseries at DC with five issues of Action Comics, a chapter of the Free Comic Book Day $0.25 Year of the Villain one-shot, and an 80-Page Giant. The Giant also contains sections written by Greg Rucka, Matt Fraction, and Marc Andreyko, which launches spinoff miniseries for Lois Lane and Jimmy Olson and brings Supergirl back into the fold of the Leviathan event after her cosmic adventures. While Bendis doesn’t really delve deeply into the characters or thematic issues behind them, he does wrap a ton of DC spy history together with a great deal of humor. The disguises Clark and Lois don in Action Comics as “Chaz and Andi, Agents of Spyral” are utterly hilarious, and the banter between characters is top notch, as is expected from Bendis. Bendis also lavishes in worldbuilding details, such as the intimidating Leone and the Invisible Mafia, with her protocols about not mentioning anything that might trip Superman’s hearing.

Working with Bendis to set up this event is a truly fantastic set of artists. Steve Epting drew the five issues of Action Comics setting up the event, and his detailed, subtle, and deeply appealing work on the characters brings the kind of spy story feel seen in his collaboration with Ed Brubaker on Velvet. The warmth between Lois and Clark is particularly nicely rendered by Epting, with Bendis’s hilarious dialogue being perfectly complemented by the expressions drawn. (Note – there appears to be a mixup in Action Comics #1010, where Kate Kane, Batwoman, is shown as head of Spyral, instead of Kathy Kane.)

The 80-Page Giant is mostly drawn by Yanick Paquette drawing the Bendis-penned main story (pages 1-22, 61-77), Mike Perkins working with Greg Rucka on Lois Lane (23-32), Steve Lieber working with Matt Fraction on Jimmy Olson (33-47), and Eduardo Pansica (pencils) and Julio Ferreira (inks) working with Marc Andreyko on Supergirl (48-60). Paquette uses his trademark inventive panel layouts and thick, appealing character and action drafting last seen in the beautifully musical end of Tom King’s “Knightmares” arc (Batman #69). Mike Perkins provides a wonderfully gritty but still appealing Lois section, giving us our Batman appearance of the book (complete with typically harsh Rucka writing for the Dark Knight). Steve Lieber’s deliberately cartoon-rendered work with Fraction for Jimmy recalls newspaper strips and Saturday morning specials, pushing the stylization in a similar way as David Aja in Fraction’s famous Hawkeye series for Marvel. Pansica and Ferreira’s work puts the DC house style to good use in Supergirl’s super-investigation of her old house. All in all, the art for these lead-ins to the main event are top notch, perfectly highlighted by Nathan Fairbairn, Paul Mounts, FCO Plascencia on colors, each providing different styles – warm and full, dark and shadow-soaked, and light and memory-washed.

Alex Maleev, the main artist for the event miniseries, provides art and colors for the short chapter in Year of the Villain #1. His digital painting style works with his distinct, clear lines, giving an otherworldly, exciting look to the book, a great taste of things to come. His rendering of Batgirl in her new Sean Murphy designed costume is one of the best renderings of that outfit yet.

Final Thoughts: Five months of work by Brian Bendis and an army of artist pay off in this enormous, action and character packed 80-Page Giant.