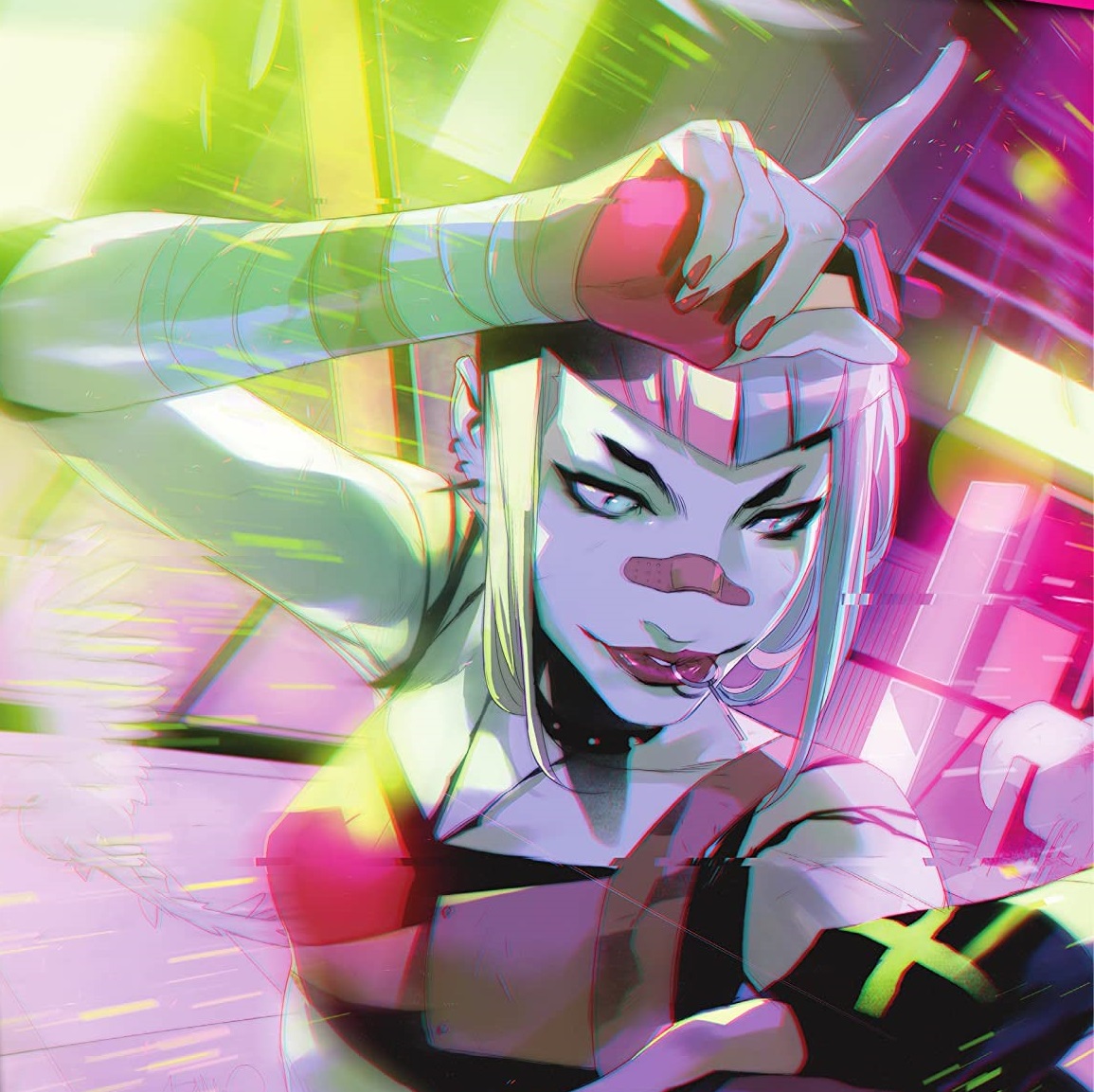 Overview: In Future State: Gotham #4, Harley Quinn and Punchline paint the town of Future State Gotham black, white, and exploding as they fight each other and Hunter Panic!

Synopsis (spoilers ahead): Jodi Edwards, Hunter for the Magistrate, sets out to recapture Punchline after the Blackgate breakout in the last issue, but she’s not the only one – Harley Quinn is on the case as well. Punchline steals an old bracelet of teeth from the Joker back, then Harley bursts in, demanding a duel to the death. In response, Punchline transforms her henchmen into were-hyenas, and as they all fight, Edwards arrives as Hunter Panic (wearing a version of Mother Panic’s suit). Punchline blows up the tower they are all in, and Harley Quinn crawls over Hunter Panic to get to her bike. All three end up in a high-speed chase through Magistrate Gotham, with Harley eventually plowing into Punchline on her roller boots, beating her savagely until she notices the tooth necklace – in fact, a piece she originally gave to the Joker herself. Harley leaves Hunter Panic with a captured Punchline, but Alexis warns Harley that the NEXT Joker is coming.

Analysis:  Guest artist Nikola Cizmesija takes over from series artist Giannis Milonogiannis, and co-writer Joshua Williamson drops out for this issue, resulting in it feeling a bit like a side story where none of the main characters we’ve been following have much to do. Though the series may progress to be more of a rotating team-style book, similar to how James Tynion wrote his Detective Comics run, currently it’s been pretty focused on Jason Todd’s story, so this tale feels a bit like a distraction. That being said, though the fill-in issue art is more than a bit of a step down from Milonogiannis’s usual cleaner lines and solid character face work, the tale of Harley vs. Punchline is a clever use of the two characters, contrasting their different perspectives on the Joker and his impact on their lives, similar to the brilliant writing of Batman #98 in which Harley and Punchline first really face-off. The little details, like Harley’s gift necklace to Joker, and it being regifted to Punchline, was a really clever detail from Culver, and nicely realized by Cizmesija. The appearance of Hunter Panic, clearly someone who’s found the Mother Panic suit from the Young Animal series from the beginning of Rebirth, which itself flirted with alternate universe future stories, adds a nice wrinkle of continuity, and a possible further area of exploration into who Jodi Edwards is, what is her connection to Mother Panic, and what happened to the original woman who wore the suit. Thus, despite being a bit of a filler-style story, this issue does provide a lot of grist for future story mills to grind.

As per tradition, DC includes a backup black and white reprint, The Bottom Line by Michael Golden and Jason Pearson, a goofy and cynical action short highlighting the more farcical side of Batman’s eternal war against the Joker, perhaps a shorter but just as cynical take as The Killing Joke.

On covers for Future State: Gotham #4, Simone di Meo provides a panorama pair of covers for the main and cardstock variant – main cover showing Future State Harley, variant depicting Punchline, together forming a portrait of a duel! Dima Ivanov provides an additional The Suicide Squad cardstock variant with King Shark, Bloodsport, and Captain Boomerang, which of course has nothing to do with the interior of the comic, but promotes the recent film. Since they are by the same artist, it’s up to the reader to pick whether they want a Harley or Punchline cover in their collection, or if they want to give into DC’s wicked plan and buy both for the diptych effect!

As the Bat-Family takes a backseat for an issue, Dennis Culver and guest artist Nikola Cizmesija take us on a madcap but thoughtful and heartfelt tour of the combat between Harley Quinn and Punchline.