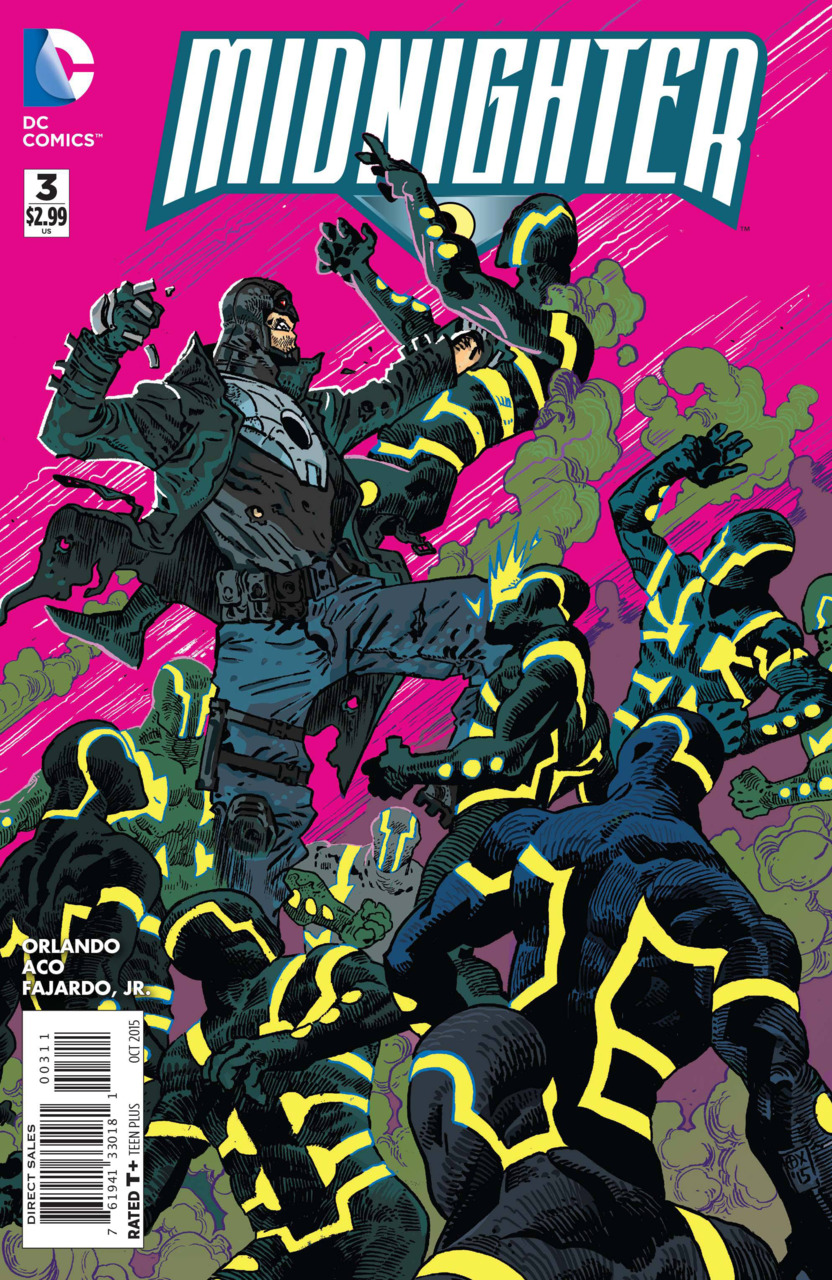 The search for the culprit in the theft of the God Garden tech continues as Midnighter beats up bad guys and saves a little girl from certain death in Midnighter #3.

I see spoilers in your future….

The issues opens in Oakland ‘Now’. A Mr. Rohmer and his hired bodyguard Multiplex are making their way through what looks like a graffiti covered subway station. They hear someone behind them, advancing upon them. They are trying to keep ahead of him but they are being taunted by the sound of their pursuer talking on the telephone. Multiplex calls him out and lets him know that he isn’t to be toyed with as he can make a million clones of himself. Suddenly there are scores of Multiplex’s (Multiplii?) in the hallway. This gives Rohmer a boost of confidence so he decides to call attention to the small army of bodyguards that have appeared and calls his pursuer a smart-ass. That smart-ass is Midnighter, and he gets a look at the myriad of Multiplii and all the fighting he is going to get to do. He declares that it must be his birthday.

The scene moves back in time several hours in a dance club in Boston. Matt, Midnighter’s boyfriend, is having a great time on the dance floor while Midnighter and his friend Tony look on. Apparently dancing isn’t one of Midnighter’s skills but the two are enjoying watching Matt enjoy himself. Tony is happy to see his friend happy and getting his life together.

A little later in Oakland, Midnighter rings the doorbell of a woman and says that he heard her daughter is missing. Midnighter offers to help find the girl and beat the blazes out of the people who took her. He gets handed a plate of pancakes and sausages by the grateful woman.

The story quickly moves to a familiar scene of Midnighter laying a beat down on a guy he wants information from. The poor broken soul has been trafficking people and selling them to baddies who are plugging the kidnapped kids into the one of the stolen God Garden machines. Midnighter gets the name of the baddie – The Zardiis.

The scene changes. Mister Rohmer, whom we saw at the issue’s opening, is bragging to the Zardiis about his Rohmer Reactor. The Rohmer Reactor transfuses the life force from one body into another so that rich people won’t age. Rohmer and the Zardiis are haggling over the price of the reactor when Midnighter shows up. He beats the Zardiis up and saves Amanda from being used to ‘power’ the Reactor. Amanda is scared of Midnighter at first but he shows her that he is on her side and will take vengeance on those that took her. Amanda is concerned for Midnighter’s safety from fighting Rohmer’s ‘costumed guy’. Midnighter isn’t too worried.

Flash forward to the fight between Midnighter and the Multipli. Midnighter is joyfully painting the room with blood leaving Rohmer alone with him. Midnighter correctly suggests that Rohmer wasn’t able to steal the God Garden tech himself and is told that the Moscow Mongrel is the thief. Midnighter smashes Rohmer’s face off. Goodbye Mr. Rohmer.

After the fight, Midnighter returns a very grateful Amanda to her Mom.

Later that night Midnighter and Matt talk and shower. Matt’s mom was a nurse so he isn’t grossed out by the blood all over Midnighter. Later on the roof of their building, they talk about their lives and how they are different but also accept each other. Midnighter recalls his breakup with Andrew and how he needed to get out of that relationship so he could become a whole person on his own. Midnighter tells Matt that the God Garden thief has a file on who he was before he became Midnighter.

Jump forward to tomorrow on a ship in the Northwest Territories of Canada. Dick Grayson and Helena Bertinelli are fighting some super soldiers on the ship. Helena calls out to Dick that there is someone sneaking up behind him. But Midnighter appears and grabs the attacker. To be continued…

This is a comic book that shouldn’t work but somehow succeeds beyond all reasoning. As much of a bad ass as Midnighter is this book really isn’t about fighting. It is about a man searching for answers from his past, but still completely accepting the person that he is. His relationships with his loved ones are touching and feel real. Also, when he meets someone new they are wary of his fierce appearance but soon understand that there is a deep well of kindness in him. This comes through the comic loud and clear.

After a little dip in quality between #1 and #2 the inventive art style is back in full force here. The art technique is typically one that I dislike also but is unique, unorthodox and an integral part of the storytelling. Parts of scenes are highlighted in close up boxes. The fight scene between Midnighter and the Multiplii are shown as if a dozen photographs were spilled onto the floor. I am not a big fan of fight scenes but this page was really something to savor.

There are also a lot of little details that are fun to look for. In Amanda’s bedroom we see a Bat-mite and a Black Canary concert poster on the wall.

If I was to have a criticism of the art I’d say that some of the important details of the scenes were hard to make out. I didn’t get a chance to make it to my local comic book store to write this review so I read the book electronically. I had to really blow up the screen on the scenes with Dick Grayson make out that It was Helena that was with him. It will be interesting to see if I can make her out when I get the paper comic.

Also, I’m really interested to see why Midnighter is back with Dick after their encounter at the God Garden in Grayson #6.

If you like your heroes to feel like real people even if they are a little crazy and enjoy seeing some challenging and groundbreaking art you are going to love Midnighter #3.