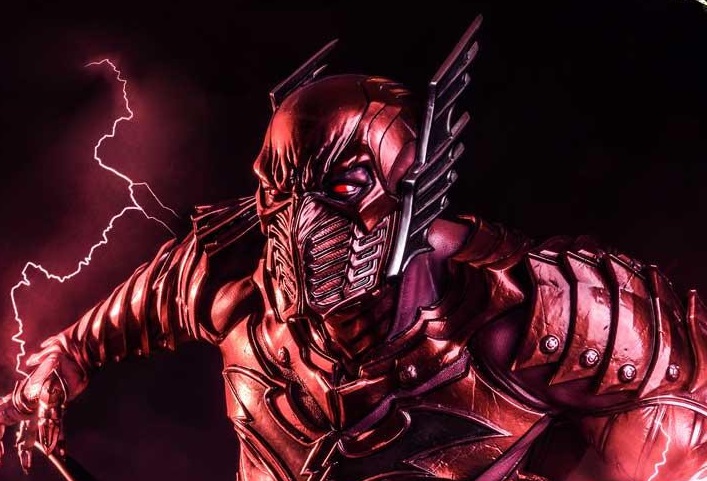 Along with the recent announcement for a statue featuring Dawnbreaker, Prime 1 Studio has also released details for another Museum Masterline statue, which features Red Death from Dark Nights: Metal. The statue comes in a one-third scale and measures thirty inches tall. As with most Prime 1 Studio released, there are two versions available, with the exclusive version including a swappable alternate portrait. The regular version starts at $1,299, with the exclusive version starting at $1,349. Both versions are expected to ship between May and August 2022. Right now, you can preorder the regular version at Entertainment Earth or either version at  Sideshow Collectibles or directly from Prime 1 Studio.

“My name is Bruce Wayne. I am vengeance. I am justice. I am Batman, the Red Death.”

Prime 1 Studio is proud to present the latest addition to the Museum Masterline DC Metal Series! The 1/3 Scale The Red Death Deluxe Version from the Dark Nights Metal!

When the Batman of Earth -52 lost all his Robins to the crimes he felt too slow to prevent, he decided that the solution was to steal the Speed Force from his world’s Flash and take it unto himself. After murdering all of The Flash’s Rogue’s Gallery, Batman subdued The Flash himself and drove them both into the Speed Force. What came out was an unholy fusion of Barry Allen’s tortured psyche and Bruce Wayne’s demented version of Justice. He would become judge, jury, and executioner in the blink of an eye: The Red Death!

And if The Red Death isn’t frightening enough, the Exclusive version comes with a swappable head to fill you with terror. The Red Death’s extra head features an open grille design as if The Red Death is uttering a horrible pronouncement that is most likely the last thing his victims ever hear.

Prime 1 Studio presents The Red Death on his own supercharged base, complete with skulls, exhaust pipes and fiery afterburners: all the trappings of an octane-fueled nightmare! This statue is a must-have for Dark Night and The Flash fans everywhere!

For those who have pre-ordered one of the latest Warrior of the Darkness, The Drowned, The Merciless or The Dawnbreaker, please check out the new campaign for more details on how to save 50$ on your way to owning the entire Dark Nights: Metal collection!

Specifications:
– One (1) themed base
– One (1) Swappable Alternate Portrait [Exclusive Version Only]