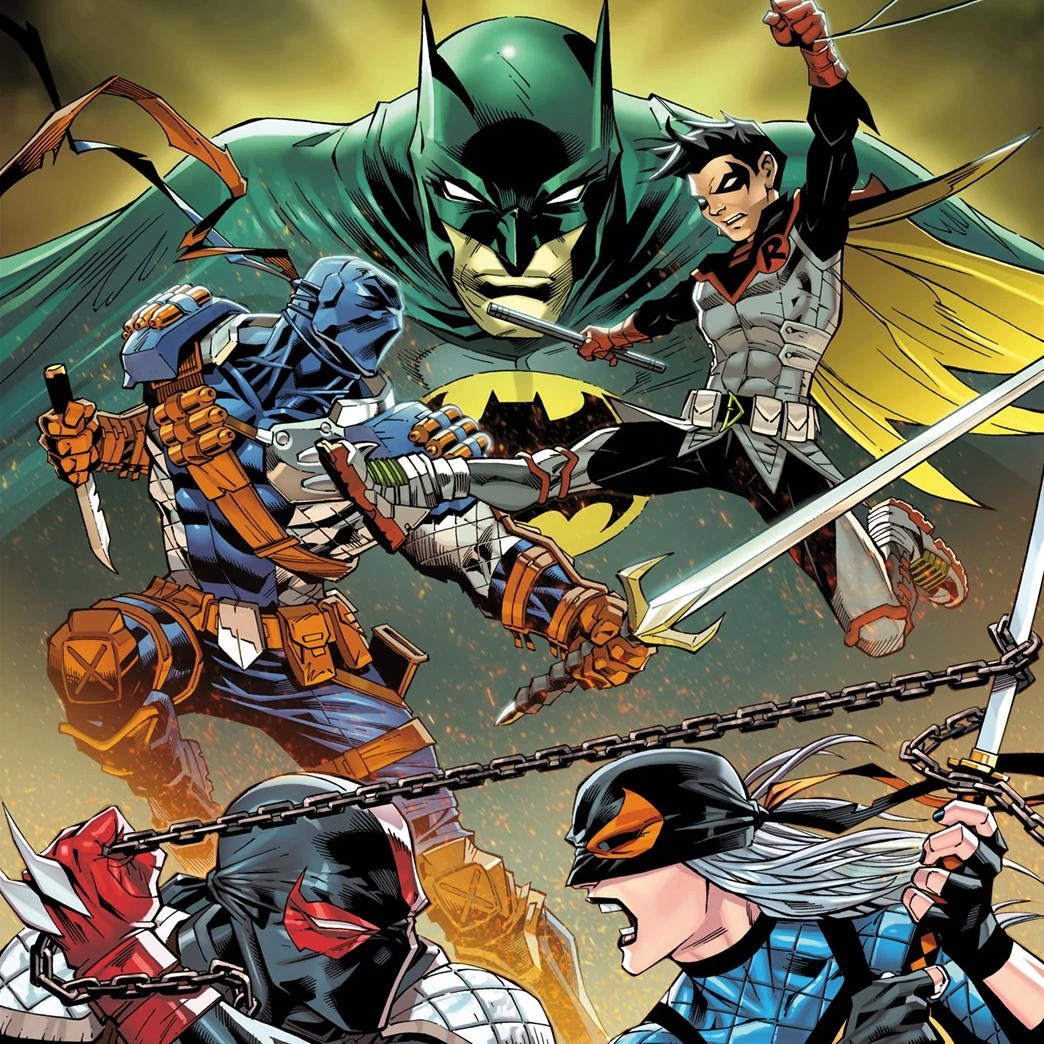 Overview: In Robin #13, Batman tracks down Robin and Deathstroke in San Francisco. After a fight, the Batman and Robin team is reformed, and the two join forces to solve this case.

Editor’s Note: As the Shadow War event continues, some of the reviews may be out of sync with their intended reading order, especially for ones that release during the same week. This issue takes place chronologically after Deathstroke Inc. #8, also released this week.

Synopsis (spoilers ahead): The next Shadow War chapter found in Robin #13 opens with Batman discussing the latest events with Oracle. Oracle reports that there has been no sign of Deathstroke since he was at the Markovian Embassy. Batman says that he only needs to find Damian. Damian vowed to find Slade, and he already has.

We pick up where Deathstroke Inc. #8 ended. Ravager and Robin poised to strike against Deathstroke and Respawn. Deathstroke blows the bunker. Deathstroke and Respawn crawl out of the rubble, but so do Robin and Ravager. The fight continues with Ravager fighting Respawn and Robin fighting Deathstroke. Deathstroke tells his enemies that he was not behind the killing of Ra’s al Ghul. Respawn backs his father up, and Robin asks why he should trust Deathstroke. With that, Respawn removes his mask to reveal that he is Robin’s brother. Robin believes this is a Mother Soul trick, and Respawn tells his story to the shocked teen. Robin discovers that Ravager had known. Robin, at first, is confused, but then he is excited that he has a brother. This is short-lived as the two boys again square off to kill each other.

Batman jumps in between the two and sees Respawn for the first time. We get the explanation again, but Slade is interrupted by Dr. Moon on his radio. The Shadows have him, and they will kill him and Phobia. Angel Breaker will murder them unless Slade surrenders to Talia’s Lazarus Palace in Nepal, where he will answer for his crimes against the League of Shadows and the death of Ra’s. Again, Batman says that he will bring Slade to justice, but he is quickly rejected. Dr. Moon is killed in front of all of them.

Slade then suggests that Talia might be behind the hit. With that, he drops a grenade into the street. Batman and Robin jump to action, saving the good people around them. Batman takes the grenade while Robin protects the civilians. By the time the danger is neutralized, the two grapple up to the roof to find everyone else gone. Batman and Robin now decide to solve the case together. Damian wants to drive as a condition of his agreeing to team up, and both board the Batwing with Robin in the pilot’s seat.

The scene shifts to Prometheus. He is fighting more of the Shadows, and he is seemingly defeated. In the last minute, Prometheus is saved by Batman Inc.

Analysis: The big reveal in Robin #13 is the identity of Respawn to Batman and Robin. Of course everyone, including the readers, already knows this. This was a little clunky in that the reveal happened twice first with Robin and then with Batman. I believe this could have been better if the reveal was with the two characters at the same time. The possible reason for two reveals is the small segment where Robin is excited to have a brother, which does give Damian a small character moment, but it’s not enough to keep the pacing of the book from disrupting. With that aside, Deathstroke is finally able to plead his innocence to the other characters, but nothing else is really advanced in that storyline.

What is advanced is the reunion of Batman and Robin. The two decide to finally work together, and I find that to be a positive development. Bruce is showing a willingness to trust his son, even going so far as to allow Damian to fly the plane. Perhaps his conversation with Talia has opened Bruce’s eyes a little. He admits his mistakes in the past and expresses a desire to move together. I agree with Tim Drake back when he was introduced. Batman needs Robin, and the fact that this Robin is his blood son makes it even more special. I hope that Batman can become more likable. He is already showing that promise.

The art in Robin #13 is the third take on this story. There is a more dramatic difference in the pencils over the last issue (Deathstroke Inc. #8). As with the colors, there is a dramatic difference between the issues as well. There is a less of a painted feel as with Batman #122, but the colors are more pronounced than with the Deathstroke Inc. #8 muted color palette. With that said, I prefer the pencils in this issue. The pencils have a crisp look, and matched with the colors, allow for some dynamic panels. I especially liked the facial expressions used on Damian when he discovered the truth about Respawn. It is easy to see him in the first panel as confused and the complete different facial expression of excitement when he exclaims that he has a brother. Damian may be lonely. We all know that the Bat-Family may not be the most communal group in comics today.

The story really does not advance too much here. We get the Respawn reveal as well as the return of Batman and Robin. In addition, we see a reformation of Batman Inc.