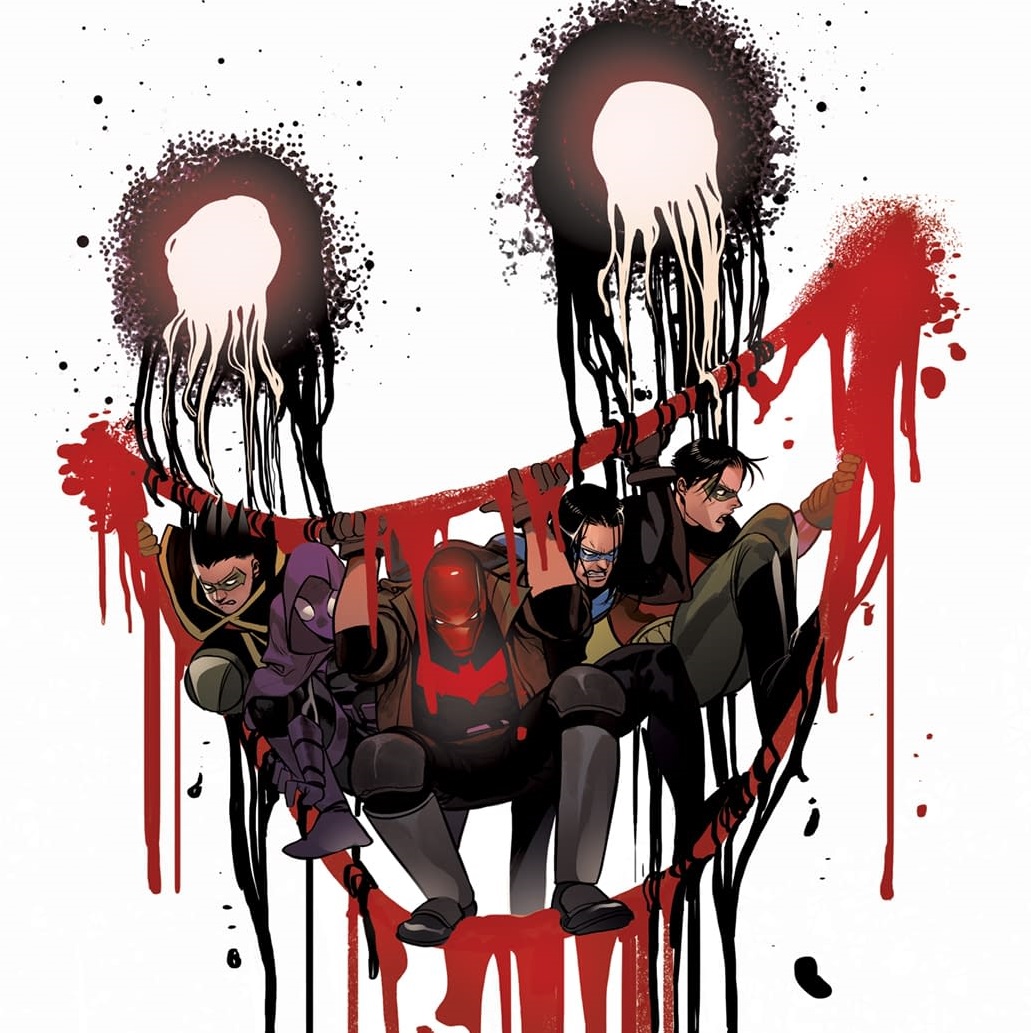 Overview: In Robins #3, Nightwing tells the tale of the Robins adventure to Batman, but everything goes wrong in the end.

Synopsis (spoilers ahead): As Robins #3 begins, Dick Grayson narrates the end of last issue’s adventure fighting the Junior Supercriminals to Batman – turning from fairly pathetic fans of villains into copies of the villains using hard-light technology. More than just a disguise – the henchmen know details of the supervillains’ lives that only they – and the Robins – would know. Dick realizes that the hack on the Batcomputer was where these disguises got their information, so he directs the Robins to fight using techniques learned from anyone EXCEPT Batman, and the Robins win handily, save for the last Joker henchman, who attempts to become ALL of the villains. This tactic overloads the villain, allowing Damian to neck strike him easily. The villains triggered their failsafe – butane gas to suffocate the Gauntlet villains they kidnapped – and Dick orders the Robins into action to save their nemeses. But Red Robin refuses, claiming that it’s time to let these murderers who hurt each of the Robins die. Jason knocks Tim out, and the Robins work together to free the three assassins, delivering them to the police.

Dick tells Batman that the Junior Supercriminals are all in comas with brain damage, and Bruce seems completely unconcerned. Outraged, Dick tells Bruce the reason the Robins gathered, and that he believes being Robin was not a good thing for any of them, storming out as Bruce winces.

In Blackgate, Spoiler visits the woman she helped capture in the first issue, Neophyte.

We see Red Robin swinging to a warehouse…but she removes her own hard-light disguise, revealing that it was really Jenny Wren pretending to be Tim, and she has Tim as a prisoner.

Analysis: After a lighthearted (if controversial) first issue, a historically complex (and perhaps more controversial) second issue, Robins #3 brings the Robins to their darkest place yet – seemingly abandoned by one of their numbers, divided, losing faith – all caused by the villain Jenny Wren, her unknown grudge against Batman, and her capture of Tim Drake!

Tim Seeley’s narrative is deeply tied to both history and to its own issues – plot points crisscross between issues with an intricate network of cause, effect, and motivation, requiring readers to remember vital details from each issue. The story provides ample reward to careful reading, though such careful readers also are most likely to get cranky about historical references which have been synthesized by Seeley into what he believes is the most coherent version of each Robin’s history. This issue continues the crosshatched allusions and character moments, from Jason and Dick both referencing their relationships with Starfire, to Steph following up on her desire to visit the girl Neophyte expressed in the last issue.

Artist Baldimar Rivas continues to provide solid, if occasionally a bit loose and awkward seeming pencils, and gives each Robin and villain great action moments. His drawing of Bruce’s pain when Dick leaves also provides a lot of emotion in just three panels, showing his ability to “act” through the characters very well. Colorist Romulo Fajardo Jr. continues to provide vivid but not garish tints for this series, all-in-all wrapping up a carefully crafted piece that provides a lot of value to those who are willing to put in the work to connect all of the threads, both within and without the series.

Series artist Baldimar Rivas provides the main cover, a bloody Joker mouth forming a prison for the five Robins, giving a nice sense of the darkness of the issue. Marcus To provides a Tim Drake workout cardstock variant, a bit less openly thirst-trapping than the Dick Grayson and Jason Todd variants, but definitely still in the same vein. Some have criticized To for making his characters all seem very young, particularly Tim in the past five or so years, but this cover seems quite reasonable.

This issue brings the Robins to a very dark place, and while Seeley's condensing of each Robin's history may prove challenging to some readers, the overall story has been intense and rewarding thus far.