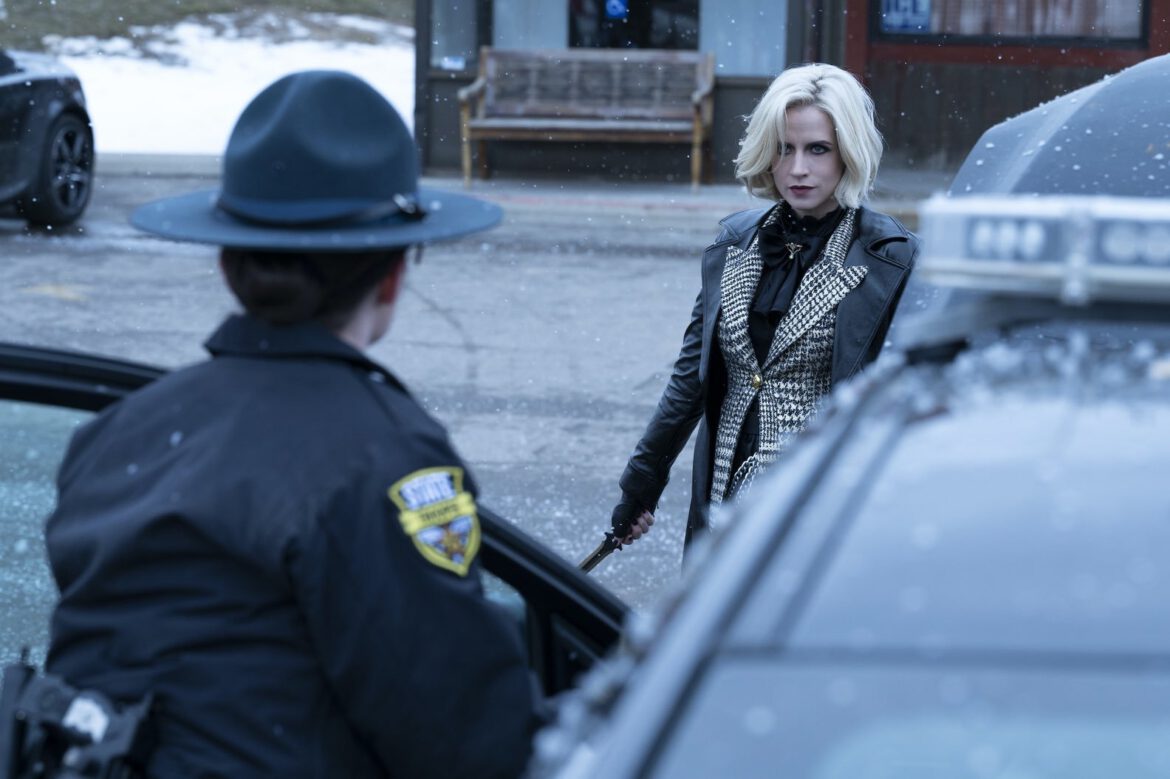 Overview: In Titans episode #306, Dick strives to repair his working relationship with Barbara while Crane and Jason’s relationship devolves. A new threat enters Gotham as Scarecrow moves onto the next phase of his plan.

Synopsis (spoilers ahead): As Titans episode #306 begins, Lady Vic kills a pair of lovebird police officers outside a diner before driving to Gotham. Flashback six years to a museum where a masked woman attempts to steal a vase. Dick, as Robin, confronts the burglar, revealing her to be Barbara Gordon. She is attempting to keep her father on his toes by showing the city’s high-tech security systems to be inadequate.

They leave the museum and discuss Barbara’s reasons for burglary: she wants to be more than her father, more than a rule follower. Dick invites her to join him and Bruce as Robingirl. She suggests Batgirl instead, but ultimately declines. They then go on a robbery spree and enjoy the goods in Barbara’s apartment. Just as things start heating up between the two of them, Dick awakes from his sleep in the present with a gunshot wound to his shoulder (suffered at the end of episode #304).

Jason Todd and Jonathan Crane argue over the pace of their plan. Jason wants to distribute the toxin immediately in order to exact his revenge against Dick. He holds himself up as the prime example of the toxin’s power. Crane implores patience and takes Jason to Thomas and Martha Wayne Memorial Hospital to witness Lady Vic slaughter an operating room of doctors and nurses. She steals a short wave positron multiplier, a machine capable of rapidly multiplying chemicals. Lady Vic is Crane’s weapon now.

Dick and Kori attempt to investigate the murder scene at the hospital. They are denied access by order of Barbara. Kori tells Dick to mend his relationship with Barbara. Dick approaches Barbara at GCPD. He asks about the security cameras. The video is corrupted and only the audio remains. Dick suggests Barbara use Oracle to clean up the audio, but she refuses to revisit “that monster.” Dick steals the audio recording from the evidence room and uses it to identify the killer as Lady Vic.

Barbara receives a call from Bruce asking to meet “where it all started.” She visits Crime Alley only to find that the call was a hoax by Lady Vic. They fight, Lady Vic takes a picture of Barbara’s face and vanishes.

Jason gives vials of Crane’s toxin to a group of guys. They attack the Excellent Gotham Golden Noodle House, the restaurant owned by Tim Drake’s parents, and kill his father. As Tim cries for someone to call 911, Jason watches emotionless from outside.

The Batman Universe Connections: This episode introduces Lady Vic as a highly-skilled thief and assassin. Though she’s not directly connected with Batman, Lady Vic was introduced as a Nightwing villain in 1997’s Nightwing #4. One of her assignments included tracking down Oracle, so her introduction in Titans episode #306 is fitting.

After Robin stops Barbara at the museum, he asks her what’s the deal with all the “Selina Kyle” stuff. This is the third Selena Kyle/Catwoman reference this season. Episode #305 included a glimpse of Catwoman’s equipment and Bruce’s advice to Jason that if his girlfriend likes cats then he should run. The equipment in the trophy case and Dick’s reference to Selena’s criminal side both point to Catwoman being from the past.

The flashbacks also give us an idea of Barbara’s timeline. She begins this journey for something more than her father six years ago. She still has both of her legs at this time and hasn’t yet taken up the vigilante mantle. In six years, she becomes Batgirl, hangs up the cape, is shot by Joker, loses her father, and becomes commissioner herself. That’s a lot to happen in six years. The show intentionally shows the contrast in her view on vigilantism from six years ago to her view on it in the present day, so hopefully, Titans will explore that time more deeply.

The last reference of note is of Oracle. When Dick approaches Barbara for Oracle’s help, it’s evident that Oracle is a device rather than a person. Barbara calls the Oracle machine a monster. At no point does she identify as being Oracle herself. Dick wants to use Oracle to track the voices heard on the audiotape, similar to the machine at the end of The Dark Knight.

Episode #306 continues the pattern of hard-hitting episodes being followed by slower episodes meant to flesh out the plot. Strained relationships abound between Dick and Barbara, Crane and Jason, and Starfire and Blackfire. Hopefully those relationships are mended and we can get back to more action and plot movement.