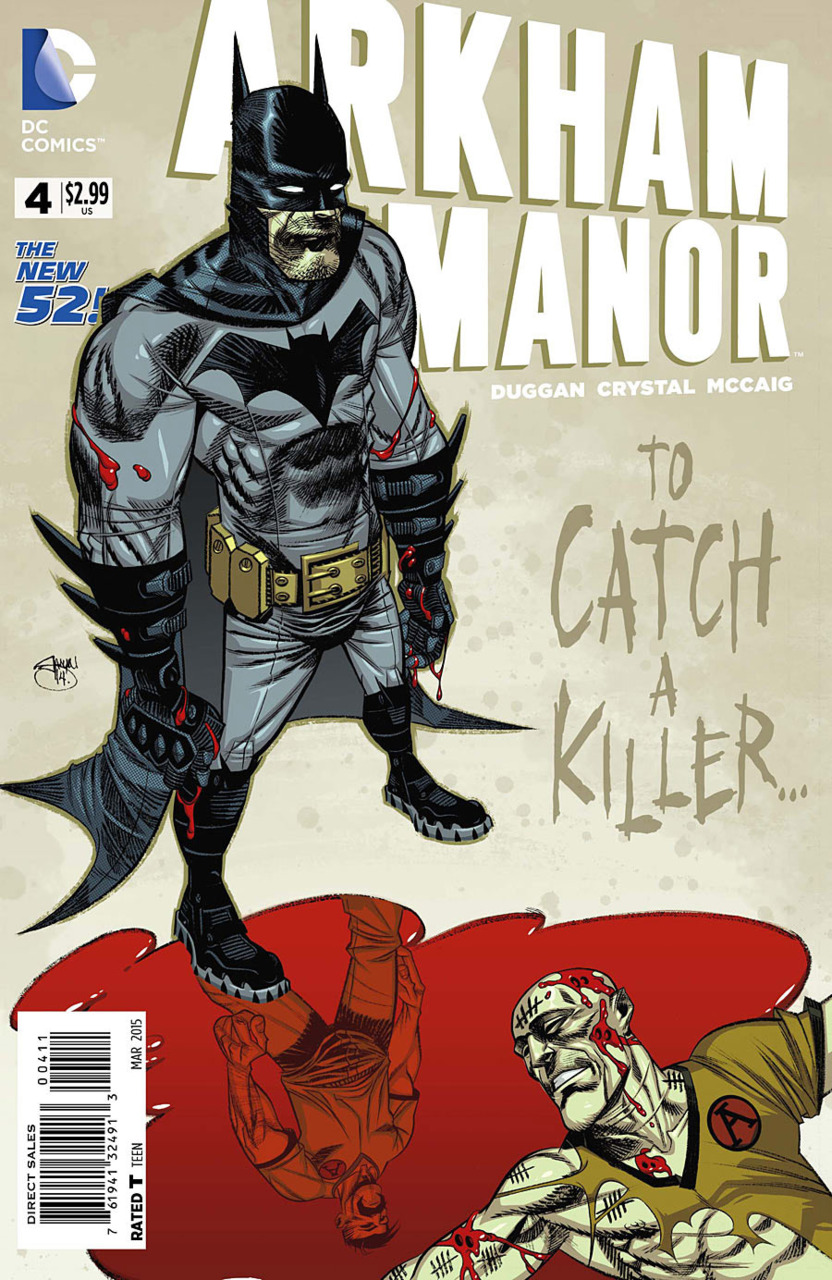 Arkham Manor has been interesting. For a limited series it doesn’t seem to be in any rush to solve the central mystery of the book. In fact it puts that plot line on hold completely until the last few pages. But plot hasn’t really been Gerry Duggan’s chief concern. Duggan has been all about creating compelling character moments and Arkham Manor #4 has plenty of them.

The issue deals almost exclusively with the jokerized Clayface (“Clownface”) reeking havoc on the Arkham inmates. Bruce, still disguised as Jack Shaw, has to enlist the help of Victor Fries to assist in taking down Clownface. The resolution to defeating Clownface becomes pretty obvious once Fries is introduced. The climax is pretty underwhelming but it is salvaged by artist Shawn Crystal and letter Travis Lanham who do some really clever work with the inevitable frozen Clownface.

Though Duggan’s writing and plotting of the action scenes leave a little something to be desired he continues to excel at creating small compelling character moments within this book. Fries has his best moment since the New 52 relaunch in this issue. I won’t spoil it but it is easily the best scene in this issue and I feel pretty confident that it could be the highmark of the series. It’s been really nice to see Duggan play with Mr. Freeze in this series. In a review of an earlier issue I had some pretty harsh criticism for Duggan’s characterization but his wisecracking, ice cream eating, Mr. Freeze has gradually won me over more and more with each issue. I am kind of hoping that this version of Freeze sticks around.

Crystal’s artwork continues to teeters between being good and really good. This issue is might be a slight step down from issue #3 in terms of his pacing and his ability to create tension but he does have a few absolutely stellar pieces that keep it from dipping too far in quality. His Clownface is creepy and frankly kind of disgusting to look at (in a good way), and the splash page that ends the book definitely does a great job of creating strong sense of dread.

With the book in its final stretch I am expecting these last two issues to be heavily focused on plot. It was a big gamble making Arkham Manor a book that actually mattered, instead of just letting it exist as a weird little book that was just loosely tied to the other Bat-family titles, and while the character stuff has been great in Arkham Manor I am worried about it’s chances of resolving in a satisfying way. If the ending doesn’t work I’ll have to wonder if sinking Arkham Asylum and relocating to Wayne Manor was really worth it. Hopefully, Duggan and Crystal can tie up these several loose ends and stick the landing. I think these guys can do it now they just have to prove it.