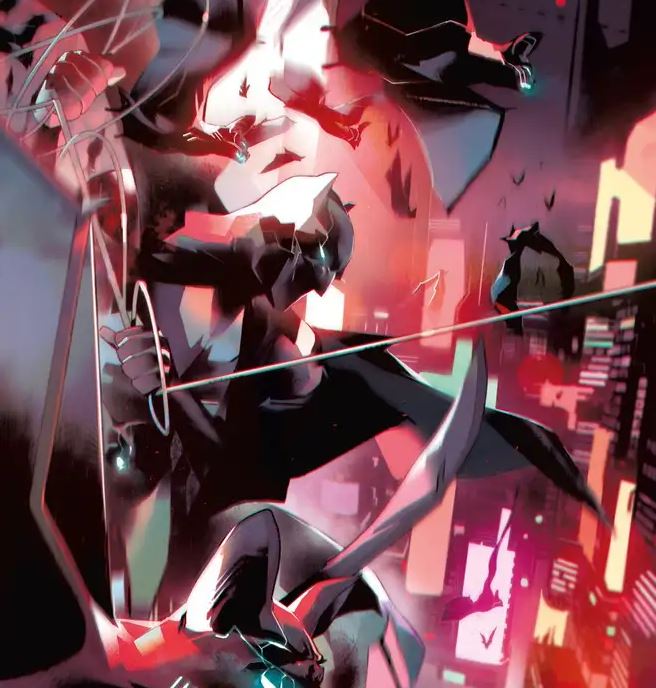 Overview: In Future State: Gotham #13, the Batman of the present and Batman of the past are both perhaps present in Batman’s future as the next arc begins!

Synopsis (spoilers ahead): Future State: Gotham #13 opens with a flashback from Future State: Dark Detective, as Batman (Bruce Wayne) and Peacekeeper-01 (Sean Mahoney, though we didn’t know that until James Tynion’s Fear State storyline) seemingly battle to the death as Batman blows up the building around them. We discover that Nightwing has been telling Talia al Ghul the story of Batman’s second death (presumably the first was RIP, though Endgame seems like it also should have counted) and then sends Talia to the train where they are moving Bruce because of Warmonger and the Next Joker’s attacks. Meanwhile, Dick dons a Batman costume (which feeds him Brane drug, similar to how Bane’s suit feeds venom so that Dick can keep having visions).

We then see a brief summary of Talia’s mission on the train as seen in Future State: Catwoman, where she rescues Bruce and fakes his death in yet another explosion, leading Bruce to her to find Damian.

Meanwhile, Hush gloats over his victory over the Magistrate and the mob to a group of Gotham villains, persuading them to join his minions. Dick’s Batman attacks, taking all of the villains down with his drug-induced psychic powers. Hush flees to fight another day.

Talia leads Bruce to Lazarus Island, where they find Damian’s Bat-(should be Robin-)wing, explore the main temple, and dodge many traps that they assume Damian laid for them. At the center of the temple, they find the angel Zauriel, once a Justice League member, who Damian bound by magic to try to find Bruce in the afterlife. When Zauriel confessed that Bruce was not in heaven, Damian invaded hell instead. Bruce and Talia wish to rescue Damian from hell, but Zauriel predicts Damian’s return as Batman 666, dooming Gotham as Bruce saw during his battles with Barbatos through time after Batman RIP.

Grifter leads Damian Batman 666 through a portal into Gotham, ready to destroy the Magistrate.

Analysis: Instead of a ten-page short from a black and white story previously published in various venues, this issue chooses to reprint six pages from Future State: Dark Detective by Mariko Tamaki and Dan Mora plus four more pages from Future State: Catwoman by Ram V and Otto Schmidt. Writer Dennis Culver finally begins the process promised by Josh Williamson at the beginning of Future State: Gotham of untangling the timeline of the Future State event from January/February 2021. The mystery of Bruce Wayne’s multiple deaths in Dark Detective and Catwoman is explained and gives the previous two arcs a connection to Hush’s plans to take over the city. The attempt to blend this all with Grant Morrison’s Batman 666 concept is quite ambitious – we’ll have to see if Culver can pull it off in the next few issues as Damian begins his campaign against the Magistrate.

Though it’s fantastic to see Dick the psychic drug addict, Talia, and Bruce take center stage, after two full arcs narrowly focused on Jason and Jace, Culver continues to focus a bit too heavily on action instead of character (rather than using action to reveal character). The trek in Future State: Gotham #13 through the main temple on Lazarus Island is mostly a multiple page-long joke referencing the Indiana Jones movies, which is fun enough if you like those films, but as a similar episode of Catwoman during the Contagion/Legacy events in the 1990s, doesn’t really reveal that much about the characters going through the traps. The use of the angel Zauriel is a bit wacky, but given the connection to the demonic, soul-sold-to-the-devil Batman 666 idea, it makes perfect sense. The entire issue is a blend of exposition and setup, connecting many past dots and putting pieces in place for the next moves – but hopefully, the next moves will also be more connected to character motivations beyond the simplistic “Bruce, we just rescued you,” “Talia, let’s find our son,” exchange we got in this one.

The new artist to the series, Geoffo, proves much better than the last fill-in artist, though the contrast between his art and Dan Mora and Otto Schmidt’s art in the interleaved pages from the Future State issues is not kind to Geoffo. However, he does a fine job, and hopefully, in the next part of the arc, he won’t be as stymied by the comparison unless the series continues to try to use previous Future State issues as cost-cutting/padding instead of using short stories.

Simone di Meo paints another vibrant cover, featuring the Next Batman and a lot of bats bathed in neon red/pink. Mike Bowden pencils a Talia (wearing white) and Nightwing (on a billboard behind her) cover, with solid linework, though strangely short blades for Talia. Di Meo’s cover seems a much superior buy for dynamism and appeal, though Nightwing and Talia fans will naturally be pleased with Bowden’s offering.

Though largely an expositional issue, the potential of the addition of Bruce, Talia, Nightwing, and Damian as main characters in the next arc of Future State, and the heady excitement of exploring more of the Batman 666 concept, do provide a lot more interest than the last several issues, as new artist Geoffo provides solid pencil work in the series’ black and white imagery.