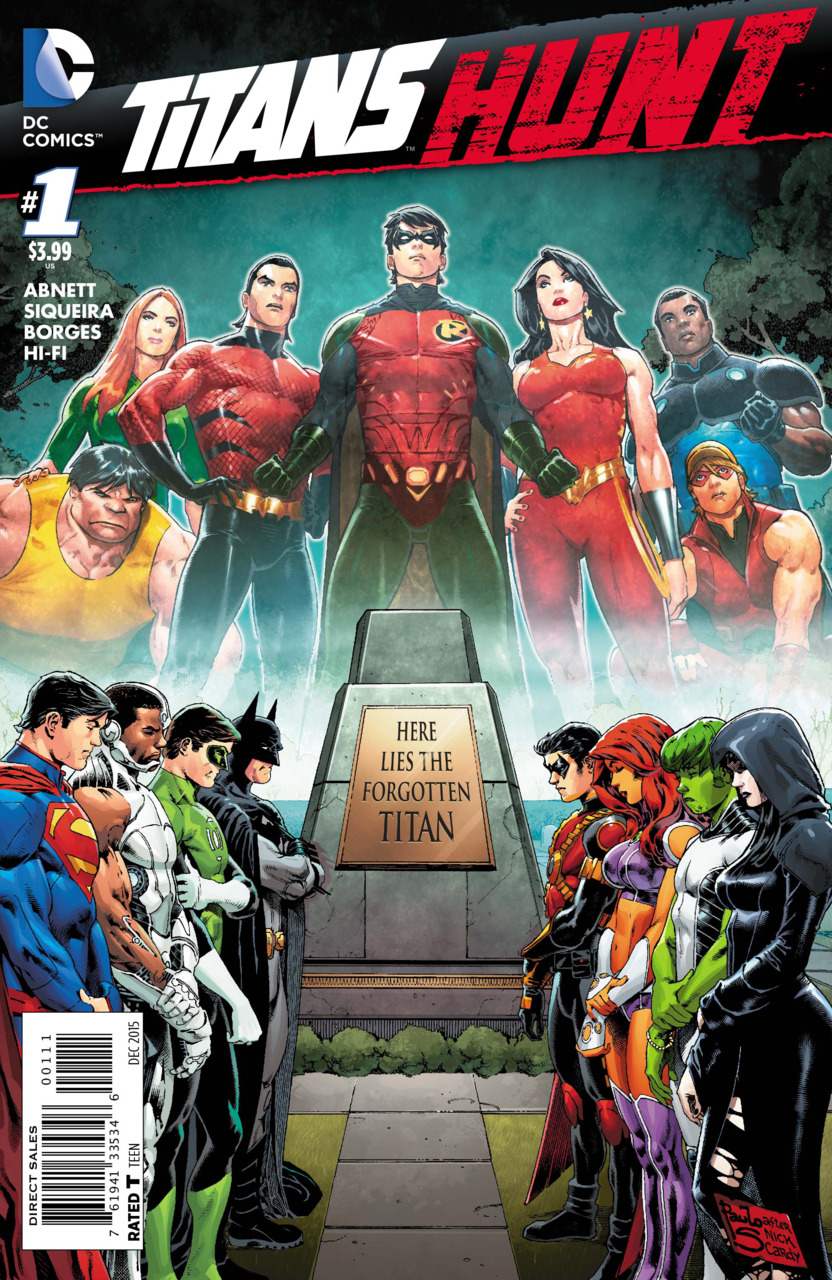 “Titans Hunt Chapter One: The Brave and the Bold” opens with Roy Harper. He looks like the Roy we know from the Post Flashpoint Universe. He is staring at a water tower. It looks like a giant T or half of a free weight and he is wondering what it is that has got his attention because he does not fear free weights or alphabets. There is something else that Roy is not afraid of and that is the weather. The tornado sirens have sounded but instead of finding cover, he goes to a liquor store to buy a bottle of rye whiskey. Roy buys it from a large fellow named Gnarrk. As Roy takes his ID back, he bumps the bottle and catches it before it hits the floor to which Gnarrk calls Roy Speedy. Roy leaves and opens the bottle and starts to drink to remember.

Elsewhere we see Spyral Agent 37, who we know as Dick Grayson. He is on a mission to catch a crime lord with the merchandise. We do not know what the merchandise is yet. Grayson settles in in the shadow and draws his firearm to wait. He does not have long to wait, the merchandise is of Atlantean origin, in fact it is an Atlantean lung. Grayson is to wait until the transaction is completed and then take action but he is not alone. An Atlantean attacks the criminals. Grayson intervenes and the Atlantean kills one of the criminals in front of Dick. The two start to fight as Dick tries to explain that his fight is not with the Atlantean. The Atlantean quickly beats Dick and escapes into the ocean leaving Dick to stare into a possible whirlpool but he is not sure what he sees.

We change scenes to a woman standing by an old clubhouse. She is being watched by a group of fishermen. They approach her asking if she needs help. The woman asks how long the place had been in ruins and the men say five years maybe more and ask if she needs help again. The woman responds that she might be in trouble but the men need to leave her alone before the trouble finds them also.

We switch scenes to the Golden Star Awards. Malcolm Duncan the composer of the score for “Trouble Finds You” has won. As he approaches the stage he suddenly sees the stairs ascend to infinity and then snaps out of it to give his acceptance speech.

We return to Dick. He is resting and tending to his wounds from his encounter with the Atlantean while he is giving his verbal report to Spyral. He settles down to watch the terrible movie “Crash Site”. Dick knows the movie is bad but he wants to hear the soundtrack which he believes won an Oscar. I believe this is the same score that won the Golden Star Award from the previous scene. The melody reminds Dick of something and he cannot put his finger on what that is. His phone rings and he finds himself in a conversation with a mystery woman who knows his name. Dick quickly learns that she is not on phone but in reality is a projection in front of him. Dick draws his sidearm but the woman admits that she is not in the room either. She references the whirlpool the Atlantean she identifies as Garth made. She asks Dick what it reminded him of and he is not sure. She says that time is running out and he needs to remember and find them and then find her. She does not identify who they are.

Back to Roy. He is drunk from drinking the whiskey he bought. He calls his addiction counselor, Lilith Clay, who looks a lot like the woman who “visited” Dick. She goes to a file drawer labeled “T” saying that she knows someone is watching her and that someone cannot have them this time. She puts a file folder labeled “Speedy” in the drawer with the file folders for Wonder Girl, Robin, Herald, Hawk, Dove, Caveboy, and Aqualad. Above the drawer we see Lilith with a version of the Teen Titans team that is not the team we see in the current Teen Titans title. Next issue: “Trouble Always Finds Me”.

This was a set up issue and I do not have many thoughts about it other than I am interested in where this is going. If this is taking place in the current continuity which I believe it is since we see the Roy and Dick characters appearing as they do in their current Post Flashpoint Universe books. We even get references of the supposed ‘death” of Dick Grayson at the conclusion of the “Forever Evil” story line after “Trinity War”, both prominent story lines in the New 52. This team of Titans consisting of these characters among others may have some some form of mass amnesia. The characters we see on the final splash page corresponds to the characters we meet throughout this issue. All of them seem to have some form of returning memories including Dick and Roy.

Not a lot happens in this issue, but what I see has peaked my interest in this story.