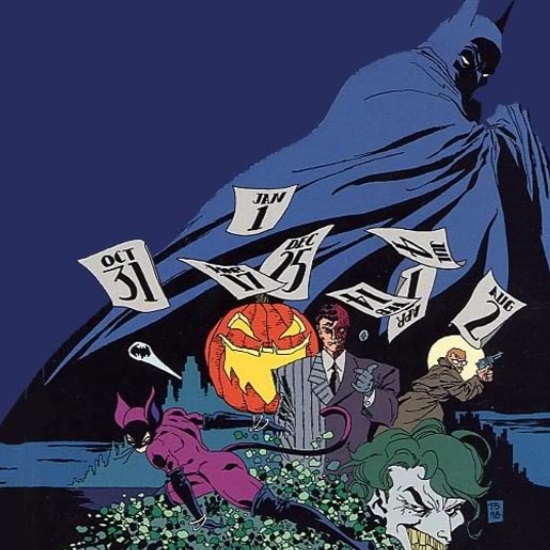 The Batman classic ‘The Long Halloween’ graphic novel may just be produced as a two-part animated feature film if a new rumor is true. The thirteen-part comic series was first published from 1996-1997 from writer Jeph Loeb and artist Tim Sale. The series is also said to have inspired many of the events in the The Dark Knight trilogy.

The story features an all-star group of Batman characters including Harvey Dent, Jim Gordon, Poison Ivy, The Riddler, as Batman assists Gotham’s law enforcement in stopping a war between two prominent mob families. Matters are made worse by a new Gotham villain whose tell-tale mark is taking a new victim each month.  Batman must race against the clock to find out who the Holiday Killer is.

A rumored cast list has been released for the film, but there is no word yet on what characters the cast members will play. The list is as includes Troy Baker, Jensen Ackles, Naya Rivera, Titus Welliver, David Dastmalchian, Jim Pirri, Amy Landecker, Matthew Gray Gubler, Katee Sackhoff, and Fred Tatasciore.

Jensen Ackles, best known for his long-term role as Dean Winchester on Supernatural is notably among the rumored cast. There is no confirmed release date for the film, but it’s assumed to be planned for a 2020 release as typically these projects are worked on a year out.