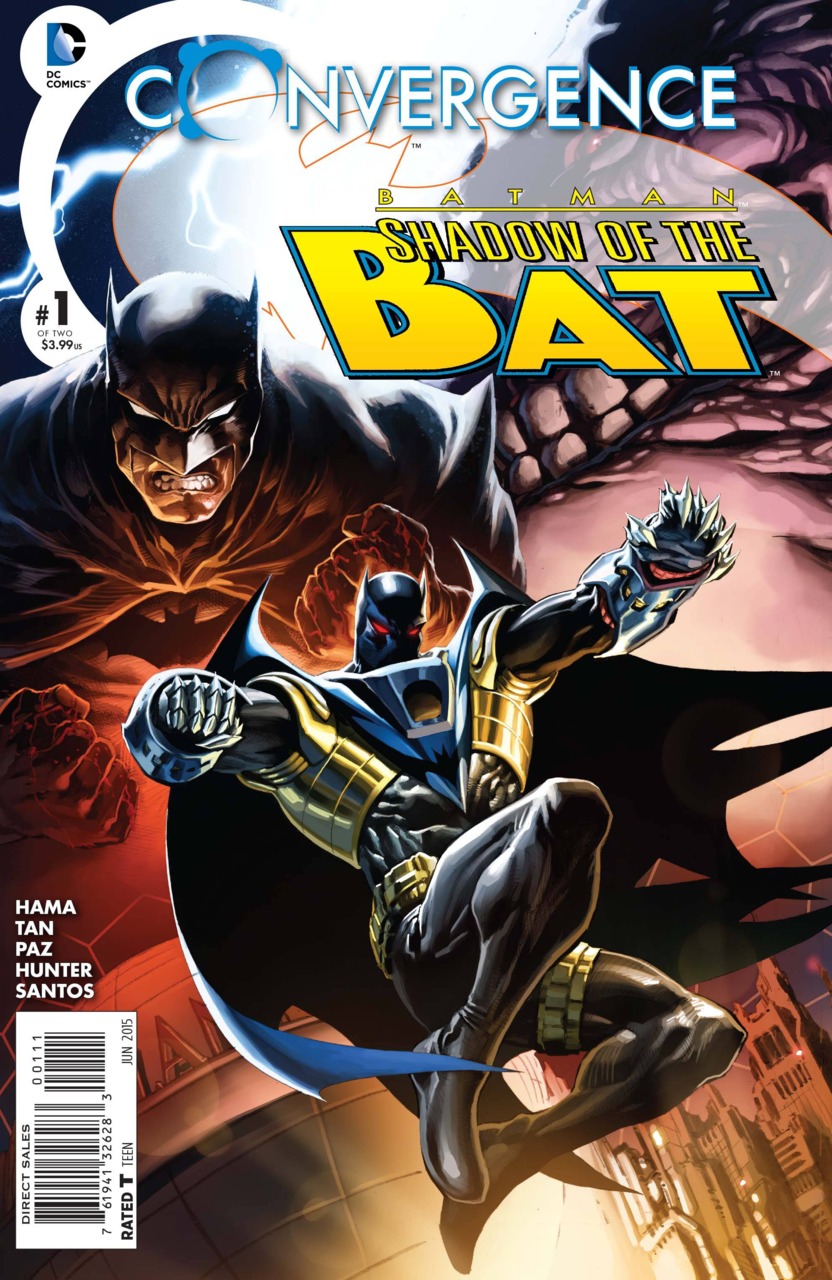 With all warning to you guys I need to preface this review with the fact that if it were not for Knightfall and it’s a 6 year old little boy named Josh Paul may not be standing here as his 21 years later reviewing this comic book for you guys. I have no idea what kind of a comic fan I would have ended up being if that story hadn’t reeled me in. The entire epic from Knightfall thru Knightsend for me is quintessential Batman reading. It was Hush before Hush. Batman: Eternal before Batman: Eternal and redefined raising the stakes for the Dark Knight that are still felt in every form of media related to the character to this very day. Whether you like or hate that book that is something you have to give respect to.

We open up the book in Pre-Zero Hour Metropolis in which Tobias Whale has Bruce Wayne under the dome captive after the latter tries to convince the former that he wants a slice of the city’s crime pie in exchange for using his influence to work for Whale’s ambitions in getting the rights to a food truck route in the wake of the dome cutting off supplies around the city. Tobias isn’t completely convinced and in a coincidence that makes little sense but services the story (more on that later) has his muscle in Jean Paul Valley rough Bruce up in order to get him to tell the whole truth. To really nail home the fact that this is recently after Knightsend a staggering number of references, some even eye rolling, to the status Bruce Wayne’s back are made throughout the issue.

The two of course decide to team up and we also get a lot of exposition not only in general as I don’t think there is one panel without someone talking but we especially get several balloons on how much a loose cannon Azbats is still is only to back track on it when he throws one of Whale’s henchmen out of the cab haphazzardly and he is then decapitated by an ill timed speeding truck wheel.(Which is another thing that I will touch upon later.) A highspeed chase erupts when the foodtruck is hi-jacked by Whale’s men.

Our heroes pursue the truck but not before another zing at Bruce for wanting to take the stairs as opposed to swinging off the building they are standing on during their stakeout. Azbats tries to gain control of the vehicle while Whale and Batman fight on top of it. The two Batmen trade barbs at each other in regards to how well their team-up is going and eventually stop the truck before slamming into what I believe is the side of the dome. And in what I hope isn’t only me in being confused as the issue comes to an end when after what amounts to little more than an explanation right of Doctor Who (Wibbly wobbly timey wimey>Time slipping) as it turns out that Pilgrim and Jester of the Wildstorm series Wetwork’s crew will be the opponents for our Batmen and have been staking the city out for their Convergence battle in the next issue.

So this issue was a mixed bag for me.

1. The art really throws off the feel of what this story was meant to represent to me. The art is really good mind you but back in the 90’s comics were still printed on the old school paper so artists couldn’t do some of the things they do today with perspective and shading. I wish they would have gotten an artist from that era to give this book the proper look of that time if they were still alive and/or healthy depending on the case of some of those greats.

2. It seems like a common theme in these two shot stories that are coming out for the Convergence line is taking top tier heroes and/or villains and placing them against ones that in some cases are at this point even beyond obscurity. I never read Wildstorm when I was younger so I don’t know very much about Jester and Pilgrim other then they are a part of a covert operations crew called Team 7. One of them might also be a werewolf of some sort. Hopefully DC will give us an explanation on who they are and why we should care in the next issue like they gave Jean Paul one in this one.

3. Okay, I promised more later and here is more. I get this is an alternate timeline and what not to what really may have taken place after Knightfall but anyone who read that story before knows that only in very extreme instances did Azrael ever put on the Azbats suit again let alone have it in his possession just in case. I guess we just have to chalk this up to service of the story than picking knits. Jean Paul was also an incredibly broken man after Knightsend. He was homeless, afraid, and lost. I believe, if I remember correctly, he almost tried to eat a rat for food. The claim in the book he was in Metropolis because of the events of Zero Hour makes little sense to me since this was supposed to be before that happened and not after as well. Like I said. It’s a mixed bag.

4. While Jean Paul was slowly losing his mind after becoming the most brutal Batman we have ever seen this side of “Dark Knight Returns” he never actually killed anyone. He left someone die by allowing a villain fall into a pit of molten metal but the brutality that we saw in this issue with the henchman being thrown from the truck and his head getting crushed was a little extreme for even this version of the character. And for Batman to be cool with it after trying to get him to knock off his antics throughout the issue was strange but I will chalk it up to wanting to take care of Whale first and deal with Azrael after. I will concede this issue shows the darker side of what this character was meant to represent but after Knightsend that all changed. Azrael reformed and gained control of himself and his actions and became a true hero even though he was still bat-sh*t insane from time to time.

5. I almost get the feeling that the writer of this book didn’t actually like Knightfall at all. The moment that get that feeling is when Bruce decides to take the stairs and Jean Paul makes fun of him. I feel like it was a jab at the writers for ever making Batman paralyzed in the first place. And this again doesn’t really line up with the overall ending of Knightsend. Bruce specifically spelunked off a building much higher than the one they are on in this issue as a test to make sure he was ready to return to fight Azrael for the mantle. Why he wouldn’t jump here is perplexing.

6. One thing I did like was Azbat’s being the brash, pride-filled, cocky SOB he was in the comics. Some of his dialogue was a little more juvenile than it was back in the 90’s but the writer definitely nailed his personality even if like I said before in his attitude not really matching the timeline of Knightfall.

All in all this story wasn’t what I thought was being advertised and that brought with it a little disappointment. What I believed was going to happen was we were going to get a Post-Knightfall Bruce and an Azbats who was Batman before succumbing completely to the System and being forced out of the mantle. What we got here was close but I am one of those guys who likes details being fleshed out in a concise manner. If some of the dialogue was spent instead on explaining what happened in the year before the dome for Azrael that would have been helpful as I might not have as many knits to pick. Does it do the time period that it was set in justice symbolically? I would have to say yes. But I think I would have done things differently in the way the issue actually shaped up.