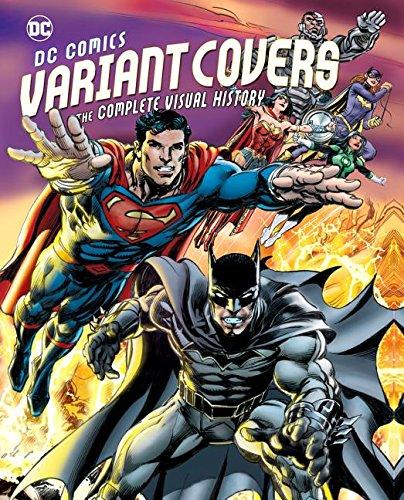 In the past two years, DC Comics has changed the way they do variant covers with their Rebirth main line of titles. So it’s an interesting fact that the newly released “DC Comics Variant Covers: The Complete Visual History” only touches on the first few weeks of titles, giving the impression that the variant covers are just business as usual, celebrating a new launch and incentivizing extra purchases of different artistic takes on a new number 1. This omission is a bit emblematic of the entire approach the book takes if you approach it from the “Complete Visual History” title. However, if you ask the question: “What is the purpose of this book, and who would enjoy it most?”, the book becomes much more comprehensible.

Written by longtime media franchise “guidebook” author Dan Wallace, the book functions as a handsomely produced art gallery for casual fans. The images are numerous (out of 182 pages, most of them are covered with the books’ 277 variant cover reproductions) and varied – to a certain extent. Only about a quarter of the images hail from before the launch of the New 52’s Themed Variant initiative in 2013. A bit haphazardly organized (neither chronologically nor topically), the book presents a brief rundown of variants from 1986’s Man of Steel to 2011’s launch of the New 52, then jumps into a hopscotch presentation of the various themes. The book rounds out with a length display of convention and character variants. Interspersed among all of the images, ranging from quartets of images on one page to double-page reproductions of “wraparound covers”, are interviews with a good number of the artists involved, giving some idea of the artists’ inspiration and process for creating these images. Additionally, artistic director at DC Mark Chiarello provides some executive level insights into the production and reception of the images in some introductory paragraphs.

None of the details provided really go into the fundamental reason for variant covers: the collector’s market. The interviews hint at the sales-based nature of the variant cover practice, but nowhere is it stated that publishers, stores, and conventions commission rare variants to increase sales and revenue from a market which is only tangentially connected to the story or artistic content of the variants. Because if you did acknowledge that fact, the variants become not works of art or pieces of emotional resonance, but simply numbered tokens which describe the importance of a title or scarcity of print run. Lest that seem too cynical, the Rebirth initiative mentioned at the beginning of this review does provide a change in the perspective. With the open to order (which is to say, stores do not have to order 100 copies or a percentage of sales to get a small number of variants, but instead can just order however many copies of both the “main” and variant covers) two-covers per main title policy, fans are encouraged not necessarily to buy all variant covers for a collection, but to choose the cover which they feel best meets their artistic desires. Those desires could be for a particular artist, style, concept, or representation of the interior story ideas- as seen in the noticeable sales boost popular artist Stanley “Artgerm” Lau provided to the Supergirl title with his warmly hued, painterly variants featuring the Maid of Might in images paying tribute to her historical and modern image. The book also refuses to mention the strong appeal of sexy covers, particularly featuring DC’s iconic heroines, though it includes images of many of the famous Power Girl, Wonder Woman, etc, covers which clearly demonstrate that aspect of the variant cover business.

Though this approach to buying variants isn’t touched upon at all in the book, as it seems likely that it was completed in 2016, since no images appear after that year, the vast majority of the images appearing as part of the themed variant initiative section hints at the new approach to variants. The most popular variants create a kind of internal world that invites the comic book reader to want to collect the covers themselves, to give scope for the imagination to these worlds. Almost all reviews mention the high quality and popularity of Darwyn Cooke’s artist month. The book itself mentions their place at the top of the themed variant months in sales and fan comment, and instead of collecting smaller sized images, multiple covers per page, it devotes 12 pages to six “wraparound” covers in Cooke’s signature neo-retro style, with its deceptively simple lines, warmly smiling heroes, and lovingly rendered geometric backgrounds. In addition to the pure appeal of the images, Cooke’s covers create a sense of an entire world, similar to his Justice League: The New Frontier miniseries, and invite one to collect all the variants and imagine their subjects going forth into vast new adventures.

Similarly, the other successful variant themes, most notably the DC Bombshells, Green Lantern 75th Anniversary, and Batman ’66 variants, all create their own worlds – in the case of Bombshells and Batman 66, which are directly tied to actual ongoing comic book series which flesh out these characters in storylines directly tied to the aesthetic of the covers. A similar effect can be seen in the Looney Toons mashup theme month, which was incarnated a few years later in the DC/Looney Toons crossover books, particularly the famous Batman/Elmer Fudd book by Tom King and Lee Weeks. The less successful variants, such as Mad Magazine, movie posters, the Flash 75th Anniversary, Harley’s Little Black Book, or the other two artist highlights (John Romita Jr and Neal Adams – though the Batman 66 variants function as a stealth Mike Allred artist highlight) are not unified enough or appealing enough – or are simply too “gag” focused to make much of an impression. The exception to this pattern is the Joker 75th Anniversary series – even though its most famous and controversial image, that of Joker menacing Batgirl by Rafael Albuquerque, was never released, all of the images have a dark wit and artistic inspiration that manage to overcome the lack of unity.

Batman Universe fans will be pleased to note that many, many fine images from both Batman and the Bat-Family – particularly of the ever popular Catwoman – grace the book. A spreadsheet analysis of the titles represented doesn’t indicate a total dominance of the Bat, as Superman easily equals the Dark Knight in number of covers printed, but the prominence of the Jock variant for All-Star Batman as a frontispiece shows the priority and visual intensity the Caped Crusader has had and will continue to have in the history of DC Comics.

If you’re really looking for a complete history of variant covers and an actual analysis of their purpose and effectiveness, this book doesn’t provide a lot of the information to really sink your intellectual or artistic teeth into in the end. However, the number, variety, and focus of the image are exactly right for a book to leaf through and recall periods of DC history or lose yourself in the worlds the artists create. Definitely recommended for image number, quality, and selection, this book will grace many fan’s coffee tables in the years to come and delight many people unaware of the vast amount of skill and beauty available to them in the world of comics.

Editor’s Note: Insight Editions provided TBU with a review copy of this title. You can purchase your own copy by heading over to Amazon.