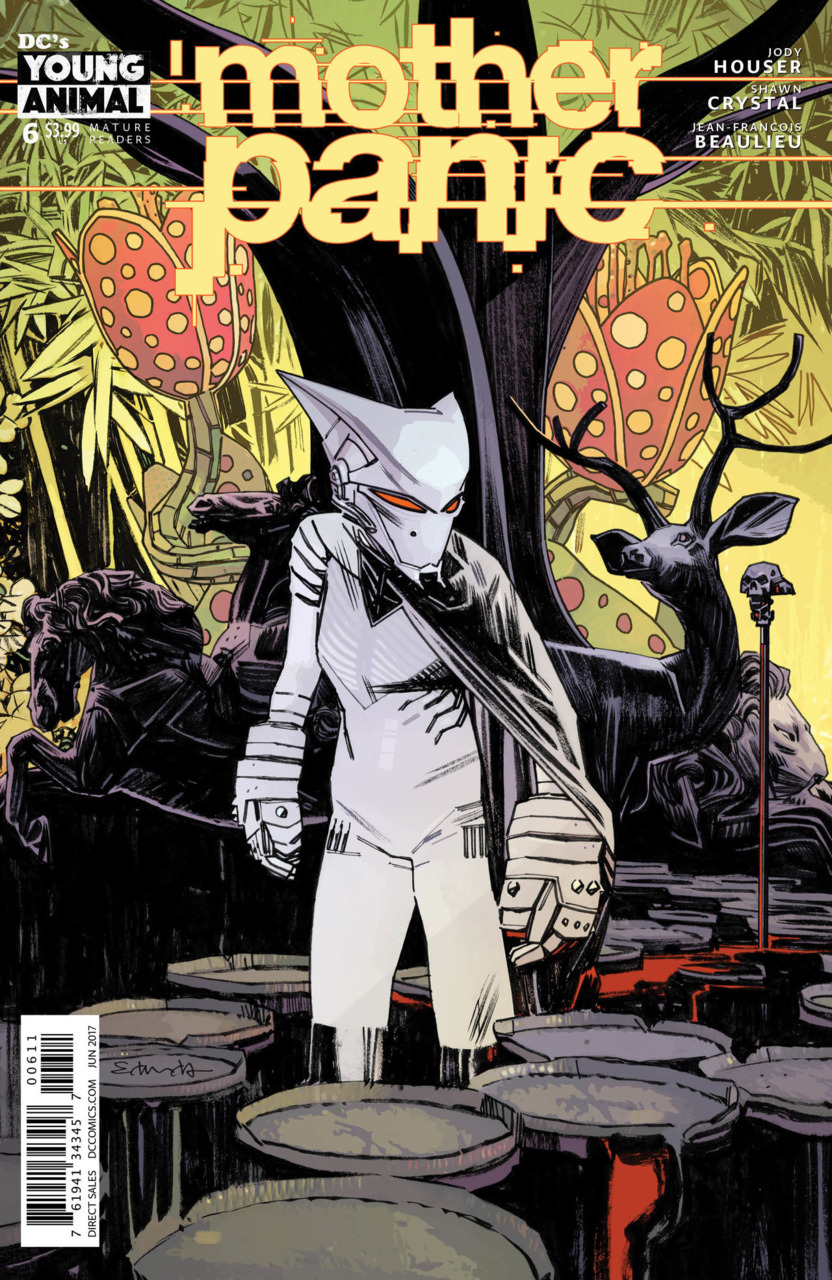 Pretty continues his reign of terror against those that he blames for his disfigurement. When he sets his sights on Violet only trouble can follow, in Mother Panic #6.

The Story (Spoilers): Another one of Ashley Layton’s buildings has been threatened with a bomb and needs to be evacuated. Layton gets into a waiting car. The car explodes and he is killed. The car bomb was the work of Pretty as revenge for the horrors inflicted on him at Gather House.

Violet is out on the party-filled streets of Gotham with a lady friend when she is accosted by a paparazzi trying to get a photo. She is angered and strikes the photographer. This scene is captured on video and makes it onto the news where the commentators use it as another exhibit of Violet’s bad behavior. Pretty watches the newscast and believes that Violet has betrayed their common cause by not wanting to kill in order to get revenge for Gather House. Pretty wants to make Violet pay for her treason.

Violet’s date from the night before has decided that she didn’t like the terrifying look she saw in Violet’s eyes during her fight with the photographer. She has decided she wants to break off their relationship. Violet leaves and goes to another bar where she has to ward off men trying to hit on her. She has had enough for one night and heads off to bed.

Pretty has been trailing Violet and has followed her to her mansion. He sees Violet’s doctor, who was also one of the surgeons from Gather House. He grabs her and threatens her so she will let him into the house.

Violet’s Mother is chatting with her rat friends when she hears voices in the house that are out of place. She wakes Violet from a nightmare to tell her that there are intruders. Pretty is in the house and takes the surgeon to the medical office and tells her to so surgery to fix his face.  Violet arrives in her Mother Panic costume and beats him to the floor. Pretty uses his cane to trip Mother Panic and tries to escape. Violet’s Mother tells her rat friends that Pretty doesn’t belong in the house and the horde descends upon him, chewing.

Violet asks where all the rats came from. Also, who is the disheveled man with them? They introduce Otis Flanagen, the ex- Ratcatcher, whom Violet’s Mother has allowed to live in the basement with his rodent charges. Mother Panic sees that the rats have saved them and says he can stay. The rats clear away from Pretty, they have eaten off his face but he is happy to no longer be the monster created by Gather House.

Break Down: Writer Jody Houser continues to build her world in Gotham. It is a Gotham seen through the eyes of a local celebrity train wreck and not from the perspective of a respected local businessman. We see the cruelty that the privileged of Gotham inflict upon their own, they who run afoul of their rules.

Pretty has a rightful grudge against Gather House. The uncanny-valley-monster he was turned into viscerally frightens people. Being naturally despised broke his spirit and he turned to violence. It is this murderous response that makes him a villain.

Violet has a similar grudge as Pretty, but simply can’t bring herself to kill. Her aversion to kill seems to be an instinct, not a well thought out morality. Because of this, as broken as Violet is, Mother Panic is a hero. And the Bat-Family knows it.

The art is by Shawn Crystal. The colors are by Jean-Francios Beauheu. The lettering is by John Workman and Shawn Crystal. These three disciplines work well together in the construction of these pages. The text flows around the art and leads you through the visual aspect of the story very effectively. It is a visually stimulating book that is easy on the eyes.

The art is simple, but it is dark in its own way. Some panels seem to be from a horror comic. The pages aren’t over full with details, but the emotional story is fully told through color and abstract imagery. The colors are clear and strong but evoke an eerie Gotham, a city of secrets.

My Take: After six issues of this book, the whole thing is working for me. This has been an effective introduction to a new character that I want to see more of. The art in this book is expressive and isn’t busy. I tend to like that kind of book design and it succeeds for me here. It prioritizes the way the character feels over the literal action. This approach results in some memorable imagery. There is a panel of Mother Panic confronting Pretty to protect the surgeon: she is surrounded by a red background and back-lit leaving her face all in shadow except for the glare of her eyes. It looks cool.

In past reviews I was holding back on a high rating for this title, but I enjoy the way the story has progressed and I love the art so I am going to go higher. If you haven’t been reading it, I recommend you give it a look.