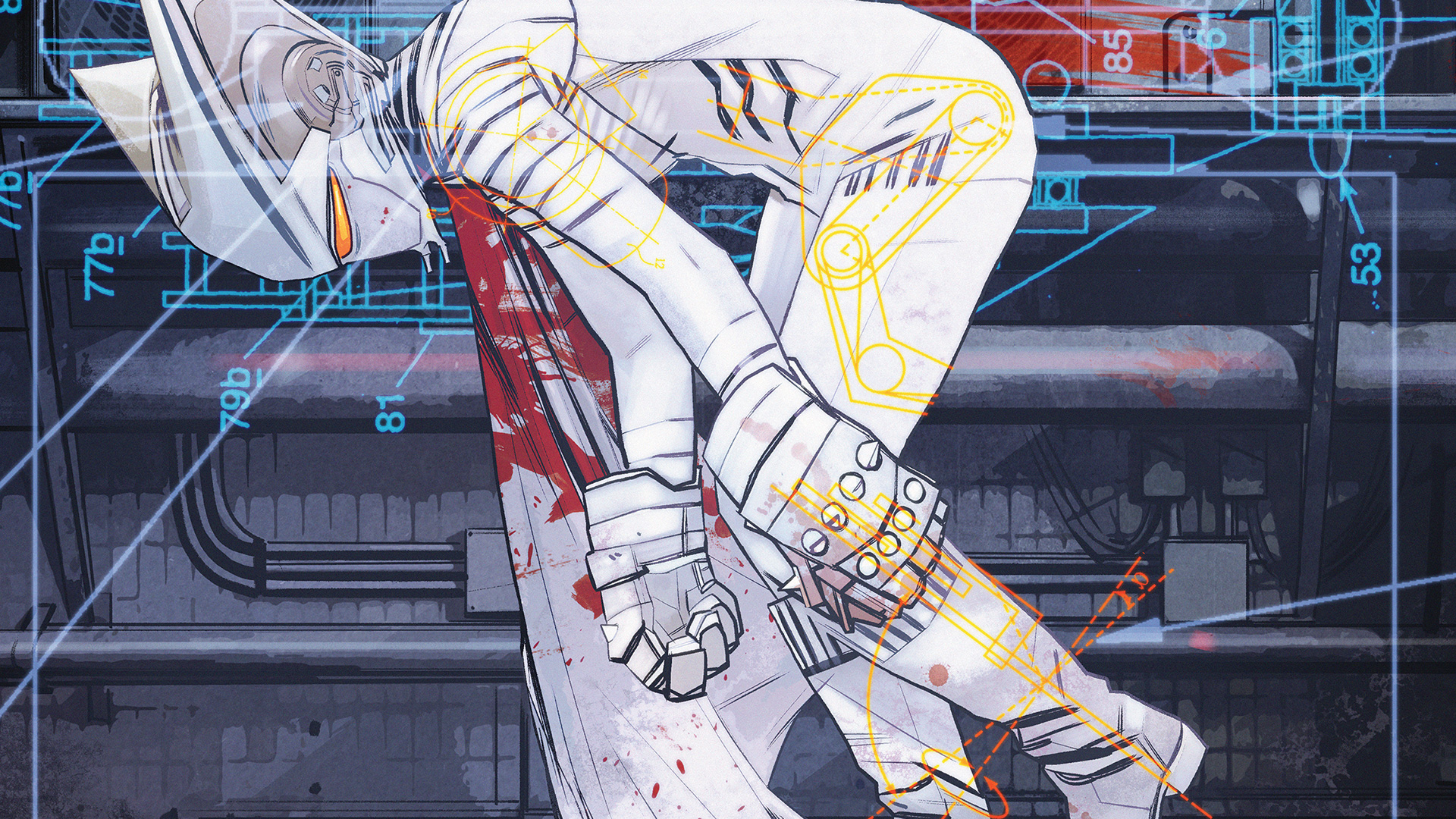 Our next comic creator interview is with the current writer on Mother Panic, Jody Houser. Mother Panic is still a fairly new comic series as part of the first wave of books from DC’s Young Animal imprint. At Comic Con, Houser spoke with us about everything having to do with one the latest heroes to live in Gotham.

TBU: Your book is, I love it, it’s a little familiar, but it’s a lot different and I’m just excited to see where it’s going.

Jody Houser: Thank you. I’m glad it seems to be connecting with people; it’s always a little bit of a stressful point when you’re bringing a new character into a universe like this and whether people are going to accept them, if they’re even going to check out the book but the response I’ve gotten from fans has just been lovely. People seem to really be digging Violet which is good because I dig her too and want to keep writing her.

TBU: Yeah, that’s great. So Violet doesn’t want to be called a hero. Dr. Varma doesn’t call her a hero, but she’s doing some good, maybe accidentally. What term would you use to describe Violet?

Jody Houser: She’s so complicated; it’s hard to sum her up in one phrase. I would probably say vigilante because her main goal has always been revenge and she keeps sort of getting sidelined by heroic actions, but you know people call Batman a vigilante too and he is 100% a hero. So I think whatever she’s doing, [vigilante is] a fair term for her. She’s taking the law into her own hands.

TBU: Her past story has been running parallel with the present. Is this something that’s going to be continuing indefinitely or do you think that the two are going to intersect at one point?

Jody Houser: Well the current story arc does actually drop a really big reveal from her past and after that I think we’re going to be going a little bit out of order. It’s not going to be completely linear for her back story. Once we sort of laid the very basic groundwork for what happened to her, but I think it’s more going to be that flashbacks are going to come into play as relevant to what’s going on in her life after that.

TBU: Have we seen everything revealed in terms of her father’s death?

Jody Houser: In terms of her father’s death, mostly it’s less about his death and more about his life. There are things we haven’t seen yet. But no, she totally shot her father. That’s not a question there.

TBU: You’ve got different villains running around, but would you say that the Gather House is sort of the big bad of the whole story that you’re writing?

Jody Houser: Oh yeah, that’s her motivation for putting on a costume and running around. That is the core to who she has become, even though you know she’s looking to hunt them down and make them pay. She’s still very much what they made her in a way, just not the way that they had hoped.

TBU: Absolutely. I love your hodgepodge of side characters that you have with the Ratcatcher, you’ve got the intern, you have her mother. What would you say each of these characters brings distinctly to Violet’s life?

Jody Houser: I think that’s one of the great things about heroes in Gotham, is they just tend to collect a lot of family members even when they say they’re not looking for a family. Her mother is very core to who she is outside of Mother Panic. Her mother is going to be the one person she’s always going to treat with kindness and want to protect. And I think from the beginning her mother has been there to help show her softer side or just show that she can be that person who does good.

Dom was someone who I just loved in the first arc, and I wanted him to stick around and I liked having that new person and who was outside of this world of Gather House and costumes and everything. He’s just a normal guy who is training to become a nurse. So he wants to help people and he sort of sees that he can do some good here both for Violet and her mother. And Dr. Varma, as we have seen, was one of the initial surgeons who started performing the surgeries on her to put the implants in. I’m hoping we will get to the story of how the two of them connected after that because usually performing surgery on someone without their consent is not the basis for a lasting relationship.

Jody Houser: But I think we’ve seen that Dr. Varma feels very strongly about Violet. I don’t think Violet is aware of how strongly Dr. Varma feels, but there’s definitely something unrequited love there.

And Ratcatcher is the weird guy who moved into the basement. But I like having someone who has that experience in Gotham around and I think as we saw in the most recent issue, that came out, number eight, you know that’s someone who Violet can go to and be like, so how does this whole hero thing work. I mean I know you’re super villain, but the hero of the city punched you in the face a bunch of times so how does he operate? I like having that sort of font of information there and also just like a weird dude with a bunch of rats who lives in the basement.

Jody Houser: I love the Pike Hotel, just how strange it is. Although to be fair, the Batcave is pretty strange too. You have a T-rex, you have a giant penny, that’s not a normal place but I think it’s so ingrained in our collective psyche that it just seems normal to us. So I am trying to do something really fun and different with Violet and her home base and the family she’s collecting.

TBU: Ratcatcher is sort of a D-list villain in Batman’s rogues. Why of all the villains did you chose him?

Jody Houser: Well, we always wanted it to be like a very D-list person to start and I think Ratcatcher specifically was Gerard’s idea, but I mostly remembered him from an arc of Catwoman I read as a kid where Catwoman and Batman are trapped in the sewers and being attacked by rats. So, it was like, yeah that dude is awesome.

TBU: Besides Otis and Batwoman who appeared, is Violet going to go up against or meet any other member of the Batman family?

Jody Houser: Well we’ve seen hints that Batman might be keeping an eye on her in the current story arc so we’ll see if he shows up. And other than that, we’re planting some seeds for some things for the future, but it’s a little early to specify anything. I would say definitely keep reading and I’m sure you’ll see some familiar faces pop up sooner rather than later.

TBU: Okay. I want to talk about something that I really like about the art. There are these moments where you have a fight scene and juxtaposed with them is sort of a natural phenomenon like a snake eating a mouse or something like that, and I wondered what went into writing those moments and what impact do you want from those moments?

Jody Houser: Yeah that’s a, that’s a sort of a fragment that’s left from Violet’s conditioning. These are things she’s actually seen as she’s fighting and they’re always in red and white and I think it was set up in Gather House. The Gather House was feeding these images into them so that’s one of the things that she hasn’t been able to shake off from what they were trying to make her into. That’s something that she’s still a little hunted by. But mostly it’s just trying to come up with something weird and creepy in red and white. It’s also a little bit of like the little lines of poetry scattered throughout the issues.

TBU: Okay. So we’re actually seeing flashes of what Violet’s seeing in these moments?

Jody Houser: Yeah. So probably, I’m imagining they go very quickly for her, she might not even really have time to register what it is but I just sort of love having that peek inside her head. She’s not really a normal person. She was sort of taken apart and put back together and she has a lot to deal with.

TBU: Final question. Does Violet deserve to be happy? Do you ever foresee her being happy in your story?

Jody Houser: I think Violet definitely deserves to be happy. The question is, is she is so broken that she can’t get to a place where she can let herself be happy? I think Varma is an interesting example of this because she talks about how much she’s after revenge, but Varma was part of what was done to her and she’s allowed Varma into her life so I think she has more of a capacity for forgiveness than she realizes. If she can sort of accept more of that side of herself and more of the side that has delightful fairy tale conversations with her mother, I think the more she lets that person out the happier she’ll end up being. But it might take some while for her to get anywhere close to that.

Mother Panic release on a monthly schedule with Mother Panic #9 releasing just last week. You can check out our review of the issue here, and look for Mother Panic #10 to hit stores August 23. In tomorrow’s interview we will talk with current Detective Comics scribe, James Tynion IV.