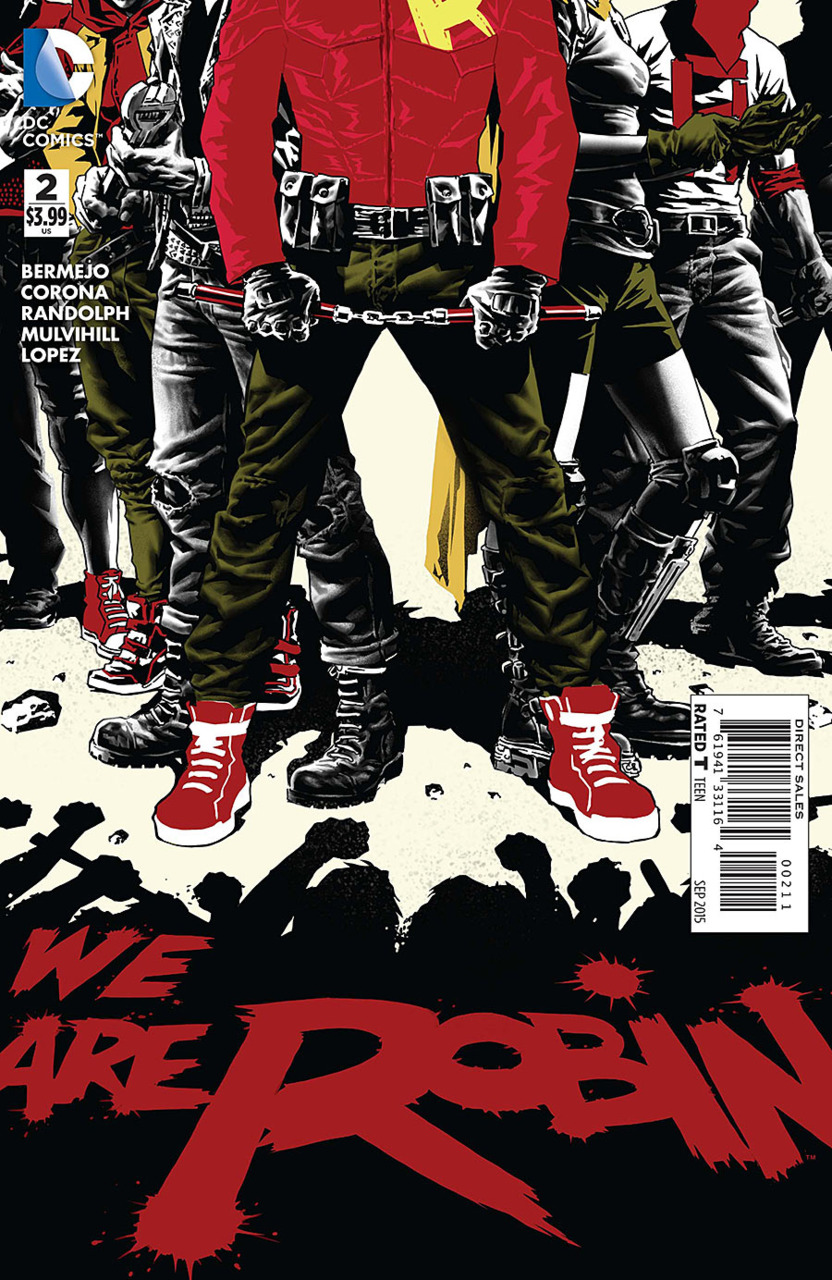 As the battle against the homeless erupts, the Robins engage several opponents as Duke Thomas defends himself. Narrating the events in the form of a letter to his parents, Duke talks about meeting the Robins for the first time and how they helped rescue him. As Riko attempts to make contact with The Nest, the rest of the Robins and Duke continuing fighting. Getting knocked down, Duke goes unconscious as the Robins begin to make a break for the exit…tossing a flare as a distraction everyone escapes up a manhole to the streets above. Receiving a text that states “leave him and run,” the Robins abandon their target as a police car rolls up to the still unconscious Duke.

Awakening in an interrogation room, a man stands before Duke who quickly states that he wants a lawyer. Responding that a lawyer wouldn’t be necessary, the bearded man with glasses goes on to explain that Duke isn’t under arrest…but the man seems to know exactly who Duke is. As Duke asks about the bombs that the homeless people and “rat-man” were planting, the man counters that “we” will have to take care of that. Stating that he only wishes to find his parents, the man offers to help with the search…but only if Duke helps deal with the bombs. As he prepares to leave, the man states that he has been keeping an eye on Duke for a long time.

With his departure, Duke wonders when he will be released by the police…as time passes, Duke eventually tries the door handle to find it unlocked. Leaving the room, Duke finds himself in an abandoned warehouse…not a police station. Ahead of him stands a motorcycle with a red, Robin jacket and cell phone. A text tells him a location to meet “them.”

Across the city, the Robins discuss abandoning Duke to the cops, but come to the conclusion that it is what The Nest told them to do. Raising the point that they could have been killed by tonight’s events, Duke suddenly arrives and states that it’s what a Robin does. Revealing that each of them seem to have met the old man with glasses, a few believe him to be the Batman…while Duke states assuredly that it wasn’t the Dark Knight.

As the group begins to wonder why they have been assembled on a rooftop, Duke states that he was instructed that he’d be helping find the bombs the homeless were setting up to blow up landmarks…one of which is conveniently across the street. As the issue closes, the Robins leap to the ground and enter the subway tunnel below the Hall of Records.

In the epilogue, the “rat-face” leader of the homeless people is seen speaking to his people…however, as a bat-shaped camera watches from above the man meets with a shadowy figure whom he refers to as “lord” and states that the first is ready to fall.

Well I can definitely say that this issue was better than the last. We did away with whiny Duke Thomas and I am glad for that. The battle sequence was pretty interesting as it highlighted each of the new Robins’ techniques…several use gadgets and weapons, while Duke seems to rely on his martial arts…and of course who could forget the techie Robin.

I was really intrigued by this mysterious man that grabbed Duke after the battle…who is he? And what does he have to do with the Robins? Was this the same man that we saw in the epilogue of last issue? He did have a cycle and costume waiting for Duke as he left the interrogation room…or is this simply the “public face” of the real benefactor. Maybe it’s Alfred?! Just thought of this, but since he has been absent in “Batman” title, maybe he has joined up with Bruce or some other Bat Family member to try and recruit the troublesome youth into a fighting force to save the city? Seems like a good theory…but I have so far been pretty wrong, let’s hope this one pans out.

As for the ending, I like that we see Duke unite with the other Robins…although I would really like to get a bit more of an intro for these characters…haven’t even got half of their names down yet. So hopefully we get a bit of a meet and greet next month. As for the big bad, I’m interested to see whether this is going to turn out to be someone we know, or a brand new villain to add to the Rogues Gallery.