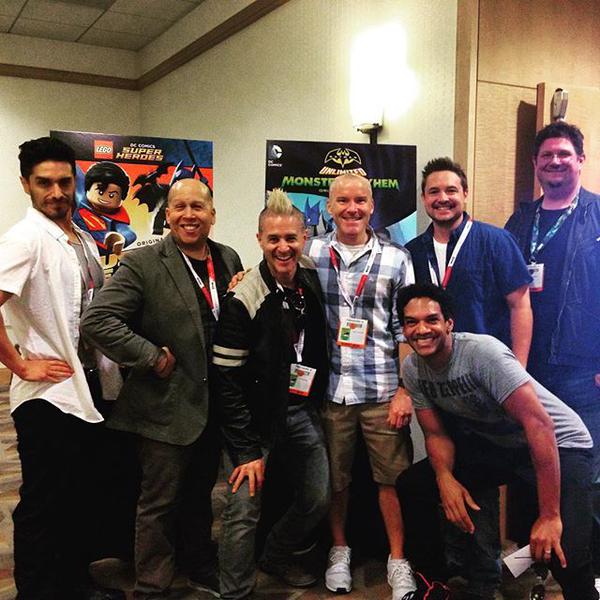 On Sunday, July 12 at SDCC, DC and Warner Home Video had a press event for Batman Unlimited: Monster Mayhem (due for release August 18, 2015), and Lego DC Comics Super Heroes: Justice League: Attack of the Legion of Doom (due for release August 25, 2015). The following actors and creators were present at the event, and while I was unable to interview them all, it was a great privilege and fun to talk to those I was able to.

The creators and actors from both spoke often on the importance of creating family-friendly stories since there is so much out there that is dark and more adult. “I really hope we get to continue with the series,” writer Heath Corson stated, “I think it’s a really fun version of Batman, and it’s nice to be able to do something for a younger audience. I truly believe every audience should have its own version of Batman…When I was growing up there was a Batman comic I could read that was okay for kids. Now it’s too dark. My sister called and said… ‘when are you going to write something that my kids can actually see?’ So I was so excited to say ‘this is a Batman for all ages!’”

It was clear how much enjoyment the actors got from portraying the characters and working with each other as they mentioned how fun it was to record in the same booth. Troy Baker said, “Khary cracks me up! Constantly! It’s really just him doing Khary, but I think he’s absolutely hilarious and it’s written so well!” “It can be difficult for poor Wes Gleason, the voice director for the project,” Yuri Lowenthal began, “because when you get people like me, and Roger, and Will Friedle, and Dave B. Mitchell in a room, we goof off a little bit because we can’t help it, because we love each other so much.”

Many of the actors and creators spoke on wanting to continue both lines of films, but “it all depends on toy sales.” Heath Corson, the writer of both Animal Instincts and Monster Mayhem seems to have designs on future stories but was tight-lipped about it. The Batman Unlimited universe is also expanding, as Yuri Lowenthal spoke about recording lines for what he believes to be animated shorts and was particularly excited about a Red Robin/Nightwing one. While I did not get to talk to the creators of Attack of the Legion of Doom, from several of the cast answers and the popularity of the prior films and games, this is a line that could continue and expand.

Kari Wuhrer (Silver Banshee in Monster Mayhem), Grey Griffin (Wonder Woman and Lois Lane in Attack of the Legion of Doom), and Cree Summer (Cheetah in Attack of the Legion of Doom) – i.e. the actresses and female representation from the films – were noticeably absent from the event. When a reporter brought this up, John DiMaggio made a point of saying there needs to be more women represented in these films. “There’s not enough [female characters] and there should be!…Women love these characters as much as men do. There needs to be more parts for women. That’s all. Straight up, I’m with you!…They’re coming, though. They’re coming because women are down for this. Women are starting to create stuff. The content is coming. And when that happens, it will be a good day!” He is excited to see what Wonder Woman’s (in Batman vs. Superman) and Supergirl’s introduction to the live action world will do to draw people to these characters and have more female characters properly represented in these worlds/media.

In an era where dark and edgy animated films are the norm, the Lego DC Superhero and Batman Unlimited lines are a breath of fresh air with fun stories, fan-favorite characters, and all-around family fun. And if you’re nervous about this Batman being ‘too kiddie,’ don’t be! Yuri Lowenthal loves the comedy and believes that veteran Batman-fans will love this even more because of the writing giving nods to Batman mythology and history.

For full audio interviews, check out the Batgirl to Oracle SDCC wrap-up episode later this week, and be sure to pick up Monster Mayhem and Attack of the Legion of Doom on August 18 and August 25, respectively.