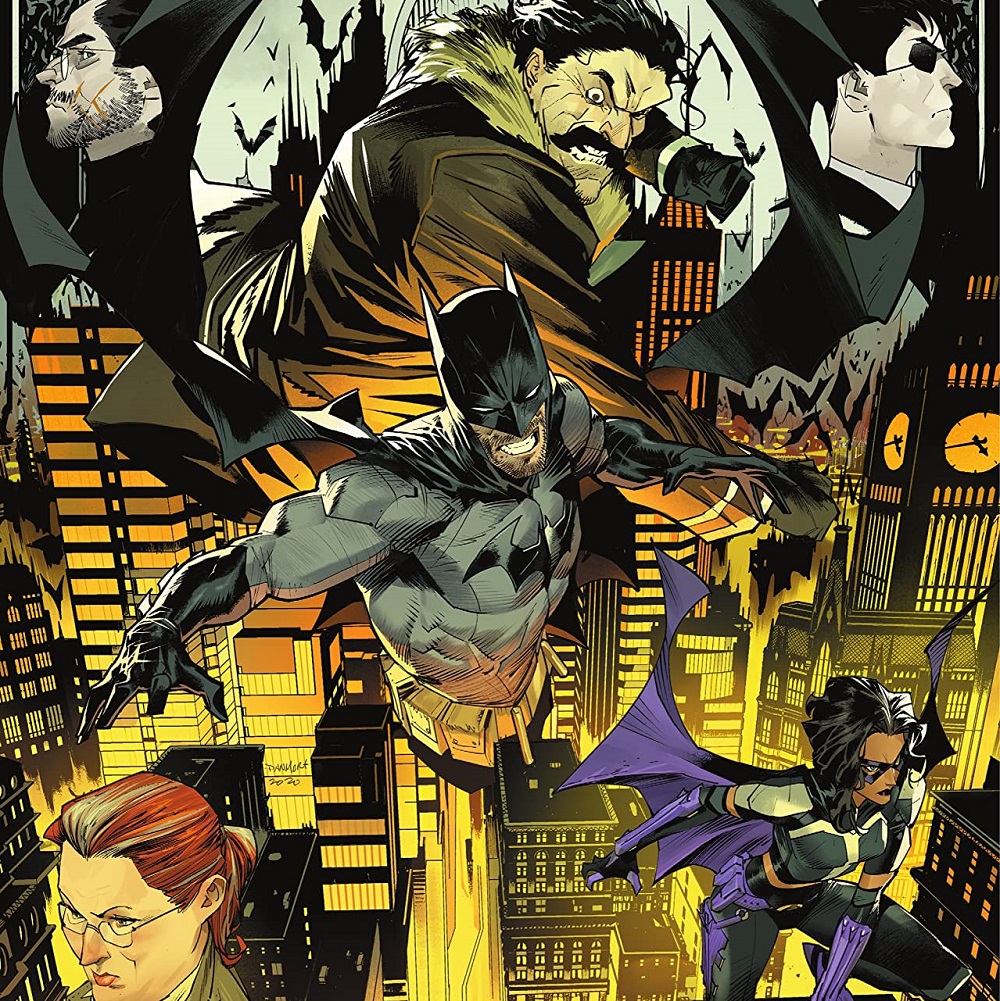 Overview: In Detective Comics #1037, Batman and Huntress attempt to solve the mystery behind the parasitic attack that killed a member of Mayor Nakano’s staff, and Bruce Wayne finds himself wanted by both the Gotham City Police Dept. and Mr. Worth. Who will get their hands on him first?

Synopsis: Huntress calls into Oracle for assistance after the death of Neil Betterman, one of Mayor Nakano’s assistants. She asks Oracle to identify any similar cases to help in Huntress’s and Batman’s investigation. Oracle in turn asks Huntress the whereabouts of Batman after hearing the word of the death of Bruce Wayne’s neighbor, Lydia. The police are looking to question him. As they talk, Bruce arrives back at the Fort Graye neighborhood, where Deb Donovan gives him the news of the neighbor’s death. As she talks to Bruce, he is approached by two GCPD officers who escort him to the Fort Graye precinct where he is questioned by two detectives. Little does Bruce know that the interrogation is being watched by the mayor. As Nakano watches the questioning, Mr. Worth pushes past Hue, another of Nakano’s assistants. Mr. Worth demands to know why he was not told that Bruce Wayne was a person of interest in the death of his daughter. Nakano attempts to calm the father, but it is of no use as Mr. Worth storms from the office, vowing to hold the mayor accountable for what happens. Nakano checks on Hue, who leaves to get some fresh air.

As Hue leaves City Hall, Oracle relays the information she has been able to gather on Neil’s death and those like it, including that of Sarah’s boyfriend. As they talk, Hue makes his way into an alley, following a man who is holding a phone conversation. The guy takes exception to Hue eavesdropping, but Hue has no interest in the phone conversation. He is interested in the man. He attacks him, revealing that he is more than to be expected.

Bruce Wayne has been arrested as a suspect in the death of Sarah Worth. He asks to use the phone to contact his lawyer but is told to wait. He realizes that he is alone in the precinct. He uses his watch to tap into the signal of the camera in his cell where he sees Mr. Worth standing outside with a rocket launcher. Mr. Worth launches it at the police station. Bruce survives the blasts, only to find himself face to face with his would-be executioner. Bruce attempts to plead his innocence to Mr. Worth but is unsuccessful. Worth fires a gun at him and chases Bruce into the sewers. He calls for Bruce to come out and face him.

Mr. Worth gets Batman instead.

Analysis: The first story in Detective Comics #1037 was absolutely great. There was a great build from start to finish as Tamaki continues to answer questions laid out at the beginning of the arc. We see that it was, in fact, the other mayoral assistant, Hue, who is the culprit responsible for the deaths including Sarah and Neil. It was a great reveal. There have been two things that have made Detective Comics the best Bat book since returning from Future State:

One thing did seem off to me, however. On the last page, as Batman takes a swing at Mr. Worth, he responds, “here” to Worth’s calling out of Bruce Wayne. This does not seem right.

I was concerned that there would be a big drop with Dan Mora not contributing to the art for Detective Comics #1037. Fortunately, that concern was put to rest with the pencils from Viktor Bogdanovic. Clearly, there is a difference between Dan Mora’s art style, which is much smoother and cleaner, and Bogdanovic, which looks a little rougher. But it really works. I truly enjoy Bogdanovic’s depiction of Batman, who is huge, yet still pales in comparison to the size of Mr. Worth. What also makes the artwork are the colors from Jodie Bellaire. That consistency alone makes the change in pencillers much smoother on the eye.

Story #2: “Gotham Has Heart” by Mariko Tamaki and Karl Mostert

Synopsis: The Gotham Gazette presents this exclusive story from staff writer Deb Donovan. She discusses the changes that have come to the city and how the changes have or have not altered the elite of the city. She expresses her disbelief in the elite’s commitment to the city as she attends a fundraiser for the pediatric wing at the hospital. As she leaves the event, with a bottle of wine in tow, she is nearly run over, causing her to drop the wine.

So much for that.

Analysis: Of the three stories in Detective Comics #1037, this is the weakest, likely the weakest of Tamaki’s run. This does not mean, however, that it is a bad story. It is not. It is quite important as it gives some more insight into some of the players in Tamaki’s arc. And she does this without any mention of Batman and only a few mentions of the name Wayne. Using Deb Donovan’s role as a journalist is a fantastic way of not only telling the overall story, but also gives you more insight into who Donovan is as a person. There is a lot about Gotham that she loves. But there is also a lot that she hates. From this story and earlier in the arc, she also has a thing for alcohol, which might end up being a thing as well. Seeing that Gotham’s story continues means there is more to come, and I am ok with that.

The art from Karl Mostert is also not the best. Mostert’s distorted character depictions are not pleasing to the eye and can distract you from reading the story found in Detective Comics #1037.

Synopsis: At a Gotham construction site, Batman and Robin (Dick Grayson) come under heavy gunfire from some arms dealers that they’ve tracked down. The only thing between them and certain death is the armor of the Batmobile. Batman radios in for assistance from Alfred and Lucius Fox, who has just been told of Bruce Wayne’s other job. Batman needs help to get out of their sticky situation and does not see the GCPD being of help. Lucius is unsure of what he could be to assist, but Alfred (and Batman) has faith in the newest member of the team. Lucius comes up with the idea of using the Batmobile’s system to generate an EMP to take out the assailant’s electrical systems that were helping the aim. The EMP works, but they lose communications with Batman for about three minutes. During this time, Lucius questions Batman’s method, particularly as it pertains to exposing the young Dick Grayson to his crime-fighting world. Alfred counters this argument in explaining how Bruce saved Dick from a darker life he was heading towards. He assures Fox that Bruce would give his life for Robin.

Batman returns to comms and thanks Lucius for the assist. Lucius decides that he will stick around. He is not doing this for Batman, however. He is doing it to Dick Grayson and any other child Batman brings into his world.

Analysis: The more I read from John Ridley, the more I like him as a writer in the Batman Universe. If we take a step back and see how he is progressed his story-writing from the books (that I have been honored to review), the following pops out at me: In Future State, there were plenty of questions about who Tim/Jace was and how he came to be. In The Next Batman: Second Son, we begin to see a lot of those questions answered. In turn, we also get new ones about the Fox family and how their relationships (or lack thereof) developed. There are also questions about how Lucius Fox become the man he is (see my latest review). Now, in this story found in Detective Comics #1037, we see more about Lucius’ development as a character and Batman’s roles in creating it. In Second Son, the extent to which Lucius will go to protect Tim (and the rest of his young family) is clear. He is ruthless to the extent that he is willing to smear the name of a deceased person to do so. We get the same here in yet a younger Fox as he is brought into Batman’s mission. Lucius makes clear he is not doing this to protect Batman, rather the younger member of the team. Since Future State, Ridley has slowly developed a dynamic with the Fox family that I truly enjoy and want to see more of (Don’t worry. We are.). To his credit, Ridley also seems to have a good handle on the Bruce and Alfred voice as well as it relates to the relationships they built over the years, which began with an unsure Fox first gaining Bruce’s trust.

I love it when Dustin Nguyen draws Batman. Whether he is tackling Lil’ Gotham or Gotham Knights, Nguyen’s art style is always welcomed to the eyes. What makes his work really stand out in Detective Comics #1037, however, are the colors from John Kalisz. Since returning from Future State, we have been treated to the wonderful work by Jodie Bellaire, including the first two stories of this issue. Kalisz’s work here, however, is perfect for this story. The darker palette used here fits the story perfectly both in the scene at the construction site and in the Batcave as well. I would definitely be ok with seeing more colorwork from Kalisz in some future projects.

Detective Comics continues to be the best of the books in the Batman universe. Tamaki's skills at putting together remarkable stories in both the main story and backups make for an overall wonderfully connected story that fills in questions as you go from one story to the next. I for one am not upset that Tec has returned to twice-monthly shipping.